Effects of Adherence to a Higher Protein Diet on Weight Loss, Markers of Health, and Functional Capacity in Older Women Participating in a Resistance-Based Exercise Program
Previous Article in Journal

Impact of a Mediterranean Dietary Pattern and Its Components on Cardiovascular Risk Factors, Glucose Control, and Body Weight in People with Type 2 Diabetes: A Real-Life Study

Reduced sunlight exposure has been associated with an increased incidence of Crohn’s disease and ulcerative colitis. The effect of ultraviolet radiation (UVR) on the faecal microbiome and susceptibility to colitis has not been explored. C57Bl/6 female mice were fed three different vitamin D-containing diets for 24 days before half of the mice in each group were UV-irradiated (1 kJ/m2) for each of four days, followed by twice-weekly irradiation of shaved dorsal skin for 35 days. Faecal DNA was extracted and high-throughput sequencing of the 16S RNA gene performed. UV irradiation of skin was associated with a significant change in the beta-diversity of faeces compared to nonirradiated mice, independently of vitamin D. Specifically, members of phylum Firmicutes, including Coprococcus, were enriched, whereas members of phylum Bacteroidetes, such as Bacteroidales, were depleted. Expression of colonic CYP27B1 increased by four-fold and IL1β decreased by five-fold, suggesting a UVR-induced anti-inflammatory effect. UV-irradiated mice, however, were not protected against colitis induced by dextran sodium sulfate (DSS), although distinct faecal microbiome differences were documented post-DSS between UV-irradiated and nonirradiated mice. Thus, skin exposure to UVR alters the faecal microbiome, and further investigations to explore the implications of this in health and disease are warranted. View Full-Text
Keywords: ultraviolet radiation; microbiome; vitamin D; inflammatory bowel disease ultraviolet radiation; microbiome; vitamin D; inflammatory bowel disease
►▼ Show Figures 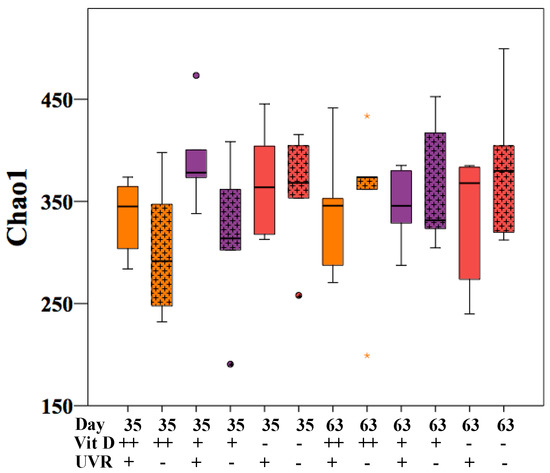