Eating Behaviors in Postpartum: A Qualitative Study of Women with Obesity

Infant formulas have been conventionally prepared with an excess of total protein in order to provide sufficient amounts of essential amino acids to the rapidly growing infant. However, this practice leads to higher than necessary protein intake during early infant development, inducing accelerated growth patterns correlated with the development of chronic diseases later in life. This study was aimed at assessing the safety of an infant formula enriched with bovine alpha-lactalbumin containing a total protein concentration very close to that of human milk, and determining its efficacy in the support of healthy infant growth from the first month to the fourth month of age. Healthy full-term infants ≤40 days of age were randomized in this controlled single blind trial to one of the following infant formulas: IF 1 (containing 1.0 g protein/dL; n = 30), IF 2 (containing 1.3 g protein/dL; n = 24), and IF 3 (containing 1.5 g protein/dL; n = 42). A control group consisting of exclusively breastfed infants (HM; n = 212) was included in the study. Anthropometric measurements and Z-scores were evaluated at baseline, at 1 month of age, and at 4 months of age. Weight gain (g/day) was similar in the IF 1 and the HM groups (p = 0.644), and it was significantly greater in the IF 2 and IF 3 groups than in the HM group. Growth patterns in both breastfed or IF-fed infants were in accordance with the World Health Organization (WHO) growth standards. At four months of age, the mean weight-for-age Z-score (WAZ) adjusted for initial value in the IF 1 group was similar to that of the HM group and significantly lower than that of the IF 2 and IF 3 groups (p = 0.031 and p = 0.014 for IF 2 and IF 3, respectively). Length-for-age (LAZ) adjusted for initial value was similar among all groups at four months of age. From 1 to 4 months of life, IF 1 containing 1.0 g protein/dL promotes growth and weight gain similar to those observed in exclusively breastfed infants. As this is a first approach to studying an IF containing total protein in a level below that recommended by international committees on nutrition, further investigations are needed to support these findings evaluating infant’s metabolic profile and growth in the long term. View Full-Text
Keywords: human milk; infant formula; infant growth human milk; infant formula; infant growth
►▼ Show Figures 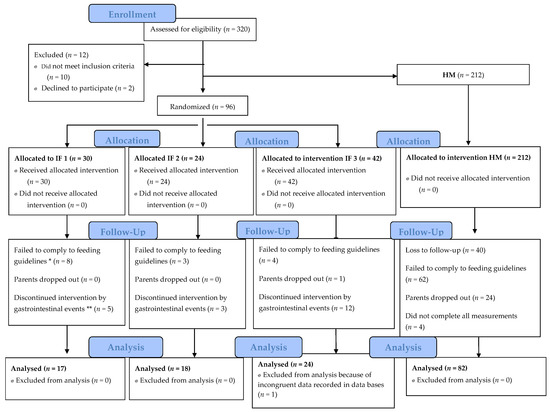