Impact of First Meal Size during Prolonged Sitting on Postprandial Glycaemia in Individuals with Prediabetes: A Randomised, Crossover Study
Next Article in Special Issue

Non-dialysis chronic kidney disease (CKD) is recognized as a major global public health problem because of the widespread prevalence in the world, of about 10%, and the natural fate of progression to end-stage kidney disease (ESKD) in those that do not die before as consequence of the extraordinarily high cardiovascular (CV) and mortality risk [1,2,3].
However, the poor prognosis of CKD patients is modifiable. Hypertension and proteinuria are main surrogates of CV and renal outcomes that can be controlled by appropriate pharmacological and dietary interventions [4,5]. In particular, salt restriction has a great potential to attenuate these major complications of CKD. Indeed, extensive research in animal models and human studies suggest that dietary sodium restriction may slow the progression of renal disease and albuminuria [6,7,8,9]. Previous studies have shown that a low sodium diet can potentiate the effects of the renin–angiotensin–aldosterone system (RAAS) blockade and, therefore, decrease proteinuria and blood pressure (BP) as well [10,11].
Nevertheless, no randomized clinical trial (RCT) in CKD patients has evaluated the long-term effects of salt restriction on CKD progression, even though two post-hoc analyses have suggested beneficial effects on this endpoint [12,13]. A recent review by McMahon et al. was unable to select RCT assessing the long-term effects of sodium restriction on CV and all-cause mortality, in the whole spectrum of CKD, including patients undergoing renal replacement therapy, [14]. Therefore, this study could only evaluate the effect of sodium restriction on BP control, even though the reported significant reduction of BP levels was estimated by combining two different measurements obtained either in clinic or by 24-h monitoring. Finally, the data on proteinuria or albuminuria could not be meta-analyzed because of the few studies included.
Therefore, a clear evidence on the benefits of reducing salt in people with CKD, though of relevant clinical interest, is still lacking. The guidelines for dietary sodium intake in CKD are in fact based on expert opinion, observational studies, and extrapolation from general population studies [15]. Based on this background, we designed a systematic review and meta-analysis of RCTs assessing the efficacy of salt restriction on BP and albuminuria in CKD. This updated analysis can be helpful as it adds new insights for dietary recommendations in the high-risk population of CKD patients.

Criteria for inclusion were: (1) RCTs evaluating the effect of low versus high salt intake in people with non-dialysis or non-transplantation CKD; (2) Adults (≥18 years) with CKD (as defined by Kidney Disease: Improving Global Outcomes (KDIGO) Clinical Practice Guidelines [17]); (3) evaluating salt intake estimated by 24 h urinary sodium excretion (UNaV); (4) evaluating as outcome at least one of the following: change in BP (clinic or ambulatory monitoring); change in kidney function measures (albuminuria or proteinuria or GFR); change in body weight or fluid; change in UNaV and urinary potassium (UKV). We also evaluated adverse effects secondary to hypotension or worsening of renal function during low- and high-sodium diet.
Reduction in UNaV was calculated as the difference between UNaV at the end of each phase for cross-over studies, and the difference from baseline to the end of intervention for parallel studies. Other interventions, such as antihypertensive drugs, use of paricalcitol or dietary modifications, were considered when constant during low and high salt intake phases. In the case of overlapping studies in the same cohort, we examined those with the most complete information. Abstracts, letters to editors, commentaries, and reviews were excluded from our review.
The titles and abstracts, found with search strategy, were screened independently by two investigators (CG and SB). The full reports of potentially relevant studies were obtained and each paper was reviewed using predefined eligibility criteria. Any discrepancy between the two authors on study eligibility was resolved through discussion.
Data extraction was performed independently by two authors using standard data extraction forms.

2.3. Assessment of Risk of Bias in Included Studies

The risk of bias in the included RCTs was assessed by two reviewers by using the risk of bias assessment tool [18]. Nine items associated with the risk of bias were evaluated: adequate random sequence generation, allocation concealment, blinding of participants, blinding of assessment, incomplete outcome data adequately addressing, selective outcome reporting, other sources of bias, risk of carry over effect, and potential bias from confounding factors.

We quantified the inter-rater agreement for study selection and quality assessment. To assess the effects of treatment the mean difference (MD) was used for final values of UNaV, clinic systolic blood pressure (SBP), clinic diastolic blood pressure (DBP), proteinuria and albuminuria in low and high salt subgroups while the unstandardized mean difference (UMD) was used to compare GFR, proteinuria, albuminuria, clinic SBP, clinic DBP, ambulatory SBP, ambulatory DBP, UNaV, UKV, body weight and total body water among two groups. When in the studies values were reported as median and interquartile range, we derived mean and standard deviation with method by Wan et al. [19]. Furthermore, when studies reported standard errors (SEs) instead of standard deviations (SDs), SDs were estimated based on the sample size (n), (SE = SD/√n). In cross-over studies, we determined the mean difference in outcomes as the difference between the end of low salt and high salt periods. Extracted results on estimate were pooled in the meta-analysis. We assumed a conservative approach in pooling results by using a random-effects model, which allows for variation of true effects across studies. We analyzed heterogeneity with the I2 statistic with 95% CI [20]. I2 values of 25%, 50%, and 75% correspond to cut-off points for low, moderate, and high degrees of heterogeneity. Sensitivity analyses were conducted to exclude that a study was exerting excessive influence on the heterogeneity [21]. Furthermore, univariate random-effects meta-regression and moderator analyses were performed to explore sources of heterogeneity where significant. Meta-regression was used to test difference between moderators. Restricted maximum likelihood estimators were used to estimate model parameters [22]. Begg’s rank correlation test and Egger’s linear regression were used to assess the publication bias [23]. Two-sided p-value < 0.05 is considered significant.
Analyses were performed using PROMETA 2 (INTERNOVI, Cesena, Italy), STATA/SE 11 (Stata Corporation, College Station, TX, USA) and RStudio version 1.1442 (RStudio: Integrated development environment for R. Boston, US).

Selected RCTs are summarized in Table 1. Overall, studies included information on 738 individuals (Stage 1–4). The sample size of these studies ranged from 14 to 302 participants. Three studies included Asian populations [24,26,28] while the others included Western populations. Difference in clinic and ambulatory blood pressure and renal function parameters are depicted in Table 2. The risk of bias was low in more recent studies and unclear in previous papers (Table 3).

We evaluated onset of hypotension and worsening of renal function reported from studies included in the meta-analysis. Six studies did not mention any adverse effect; in the others, one and 17 patients showed severe and mild orthostatic complaints, respectively, during low-sodium diet without drop-out. Four patients showed mild orthostatic complaints during a regular sodium diet. Finally, two subjects dropped out for elevation in serum creatinine during a low-sodium diet but this was not associated with hypotension. 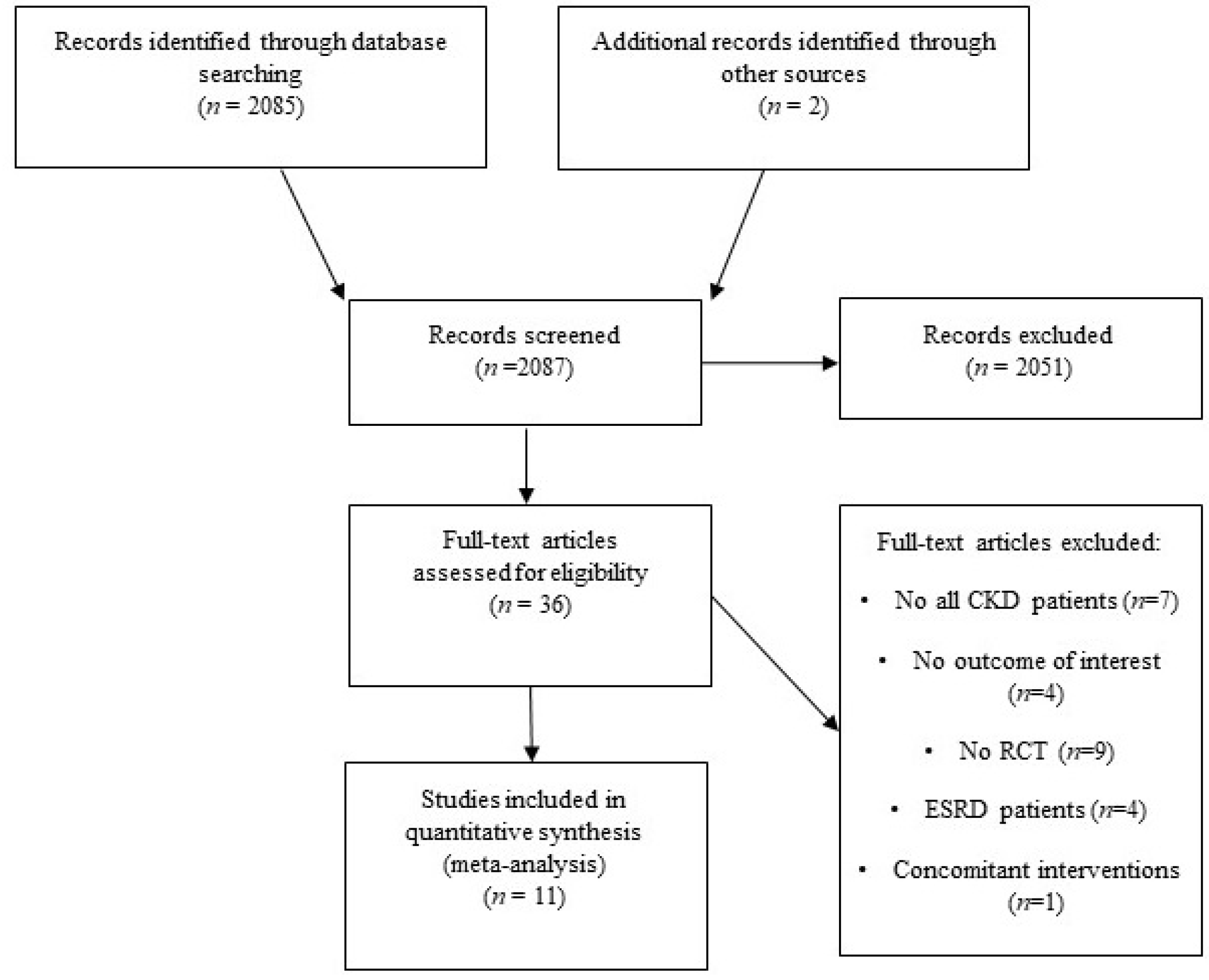 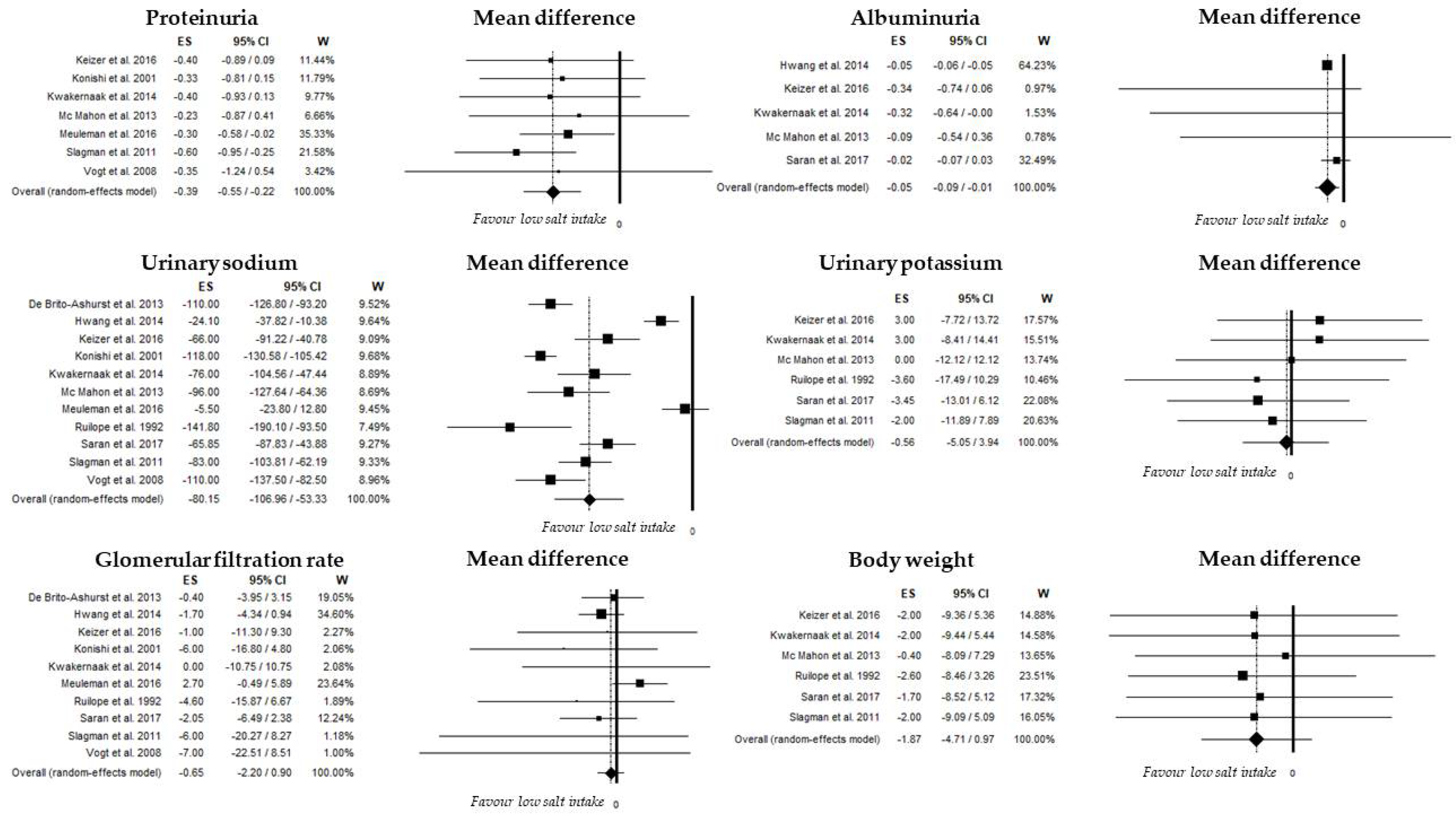 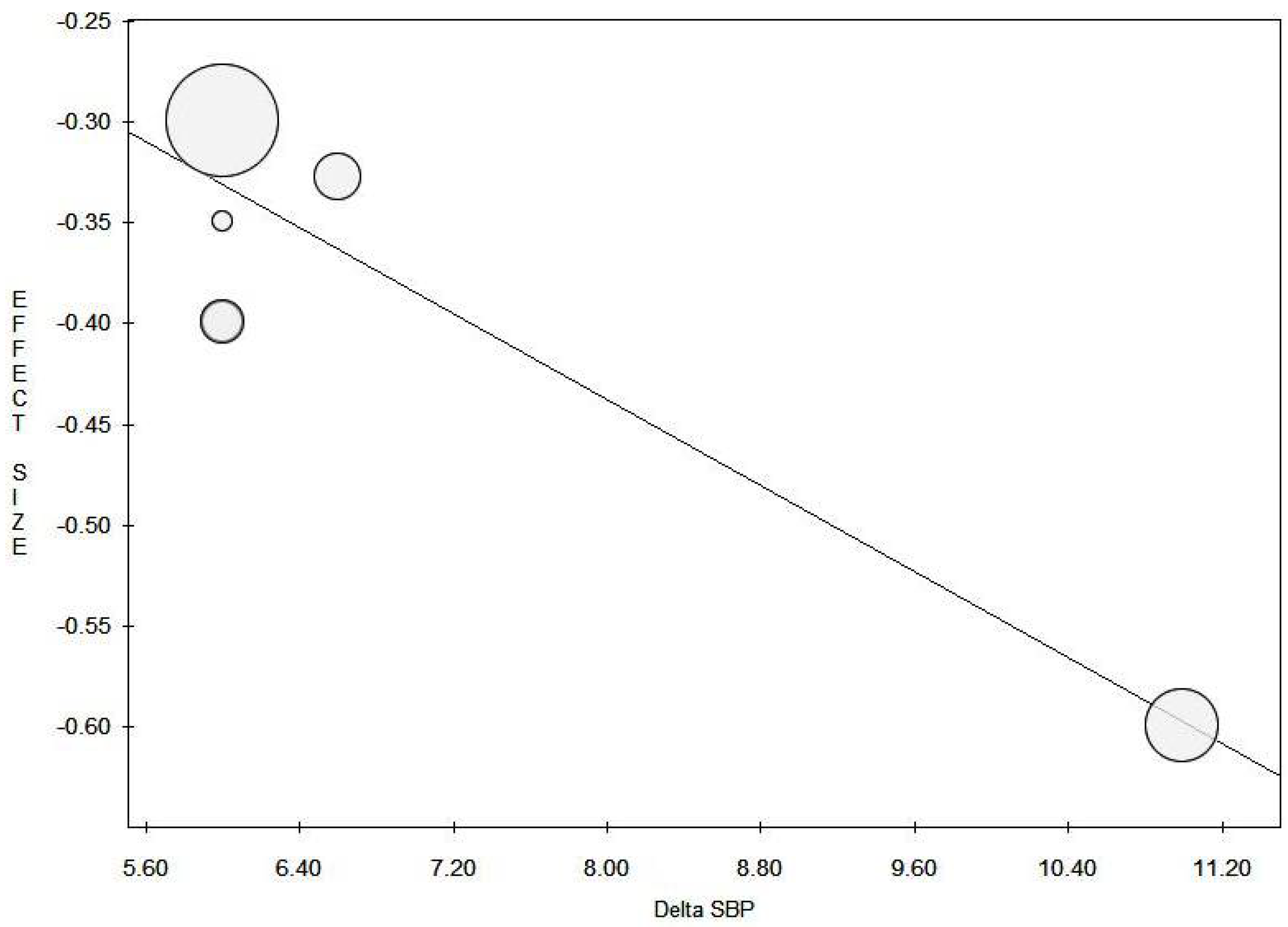