Glucoregulatory and Cardiometabolic Profiles of Almond vs. Cracker Snacking for 8 Weeks in Young Adults: A Randomized Controlled Trial
Previous Article in Journal

Association between Frequency of Consumption of Fruit, Vegetables, Nuts and Pulses and BMI: Analyses of the International Study of Asthma and Allergies in Childhood (ISAAC)

:
The low digestibility and high satiety effects of nuts have been partly attributed to mastication. This work examines chewing forces and the bolus particle size of nuts (walnuts, almonds, pistachios) varying in physical properties under different conditions (with and without water, juice, sweetened yogurt and plain yogurt) along with satiety sensations and gut hormone concentrations following walnut consumption (whole or butter). In a randomized, cross-over design with 50 adults (25 males, 25 females; Body Mass Index (BMI) 24.7 ± 3.4 kg/m2; age: 18–52 years old (y/o), the chewing forces and particle size distribution of chewed nuts were measured under different chewing conditions. Appetite sensations were measured at regular intervals for 3 h after nut intake, and plasma samples were collected for the measurement of glucose, insulin and Glucagon-like peptide-1 (GLP-1). The three nuts displayed different particle sizes at swallowing though no differences in chewing forces were observed. Walnuts with yogurt yielded larger particle sizes than the other treatments. Particle size was not correlated with either food palatability or flavor. Fullness sensations were higher after whole nut than nut butter consumption though there were no significant changes in glucose, insulin, or GLP-1 concentrations under any condition. Changing the conditions at swallowing might influence the release of energy from nuts.
Keywords:
nuts; physical properties; mastication; bolus formation; swallowing; satiety

The study followed a within-subject experimental design. Two experiments were carried out in three separate testing sessions. In experiment 1, each participant participated in one session of masticatory performance (Figure 1). Participants reported to the laboratory after having refrained from eating and using oral care products for at least 2 h. Participants were presented 5 g portions of nuts (walnuts, almonds, pistachios) with and without water, apple juice, plain yogurt or sweet yogurt in a randomized order. They were instructed to chew each sample, one at a time, at a constant rate (timed to a metronome at a rate of 1 chew/s for 15 s. Each sample was then expectorated into a pre-weighed plastic container and rated for palatability on a scale of 1 to 9 with 1 = “dislike extremely” and 9 = “like extremely [65].” A separate chewing condition was applied where participants were instructed to chew the walnuts for a predetermined number of chewing cycles (15 s) or until ready to swallow followed by expectoration into pre-weighed containers. For all treatments, electromyography (EMG) activity was recorded throughout the chewing sequences and particle size was determined by wet sieving.
Experiment 2 was divided into two sessions separated by approximately 1 week (Figure 1). Participants reported to the laboratory in the morning after an 8 h fast. They rated their appetitive sensations upon arrival using a visual analogue scale (VAS) presented on a personal digital tablet. Standard appetite questions were used as described previously by Hill et al [66]. After completing the VAS, a catheter was inserted in a vein in the antecubital space of the arm. Following a 10 min acclimatization period, a second appetite questionnaire was completed and a baseline blood sample (time point = 0) was drawn. Participants were then presented with 28 g of whole walnuts (raw) or walnut butter (whole raw walnuts ground to smooth butter consistency by a standard food processor) in a counterbalanced order. Immediately following walnut consumption, blood samples were drawn at 15, 30, 45, 60, 120 and 180 min. Blood samples were collected in EDTA-coated tubes containing DPP-IV inhibitor on ice, and centrifuged to separate the plasma. Plasma was aliquoted and initially frozen at −20 °C prior to storage at −80 °C Plasma GLP-1active was measured in duplicate using a commercially available ELISA kit (Millipore). All samples for an individual were run on the same ELISA plate. Glucose and insulin concentrations were determined using a Roche Cobas Integra Analyzer.

Texture analyses for each of the three whole nuts was conducted using a TA XT2 Texture Analyzer (Stable Micro Systems, Godalming, UK) fitted with a knife probe and set to penetrate the samples to a depth of 4 mm (almonds, pistachios) and 8 mm (walnuts) at a speed of 1 mm/s. Two different penetration depths were applied since samples differed in shape and dimension (e.g., thickness). Twenty replicates were performed for each nut type and a mean value was calculated.

The microstructure of chewing was characterized by electromyographic (EMG) recording (BioPac Systems, Inc., Goleta, CA, USA). The temporalis and masseter muscles on the dominant chewing side of each participant were identified by palpation and bipolar surface electrodes were placed approximately 3 cm apart along each muscle. A ground electrode was placed on the inside of the participants’ opposite wrist. Four parameters were quantified: Maximum bite force (volts); mean bite force (volts); total muscle work (area of the EMG signal); and total number of chews. The raw EMG output was rectified due to the bipolar nature of the signal.

A total of 800 boluses were collected (50 subjects × 16 samples) and particle size was determined by sieving the expectorated boluses through a stack of pre-weighted sieves. The mesh sizes were: >3.35 mm, 3.35–2.0 mm, 2.0–1.0 mm, 1–0.50 mm, 0.50–0.25 mm, 0.25–0.125 mm and <0.125 mm (WS Tyler, Mentor, OH, USA). The sieves were arranged in descending order of mesh size. Because wet bolus particles tended to stick together, a 0.1% sodium chloride solution was poured over the expectorated samples and allowed to drain completely through the stack of sieves. The sieves and expectorated samples were then dried for 17 h at 74 °C in an air-dry oven to eliminate all the water. This time/temperature was selected using previously described methods [55,67], with the noted modifications.

Statistical analyses were performed using SPSS version 22.0 (IBM Corp., Armonk, NY) The Kolmogorov-Smirnov test was used to verify data distribution normality. Non-parametric tests were used when the assumptions of parametric tests were not met. A non-parametric Wilcoxon signed-rank test was applied to compare the parameters describing mastication. Repeated measures analysis of variance (ANOVA), with nut type and condition as within subject factors, were applied to test if significant differences exist between nuts and between conditions on palatability ratings, masticatory performance, and proportional particle sizes. Repeated measures mixed models were used to test the overall condition effect (i.e., liquids vs. solid vs. semi-solids, sweet vs. plain) on the particle size distribution. When significant interactions were observed, main effects were tested using paired t-tests. Spearman’s correlation analysis was performed to examine the relationship between masticatory performance, particle size, and palatability. Repeated measures ANOVA and mixed models were also used to test the effects of nut form (whole vs. nut butter) on appetite and post-prandial responses. When appropriate, post hoc comparisons were made with Bonferroni adjustments. Statistical tests were performed at a significance level of p < 0.05.

In summary, the breakdown pattern for nuts differed and was not explained by a sole physical property (hardness). Breakdown is likely determined by multiple food properties (elasticity, plasticity, shape, etc.), consumer variations (e.g., dentition, swallowing threshold) and the conditions under which the nuts are consumed (e.g., complementary food viscosity, taste quality). In contrast to some prior findings with other foods [61], sweet flavor was associated with a greater preponderance of small particle sizes. Further study will be required to determine if this is a specific effect with nuts.
Fullness increased after the mastication of whole walnuts compared to walnut butter, though gut peptide concentrations remained unchanged. The present findings raise the question of whether the differences in oral processing translate into altered digestive processes [100]. Additional studies are warranted to fully understand the significance of these results on both the bioaccessibility and bioavailability of energy from walnuts.

R.D.M. received a research grant from the California Walnut Commission to conduct the study. B.M.M. was supported by a National Institute of Health (NIH)-training grant during her doctoral training.

The authors declare no conflict of interest. Funding sources had no role in the design of the study, or in the collection, analyses, or interpretation of data. 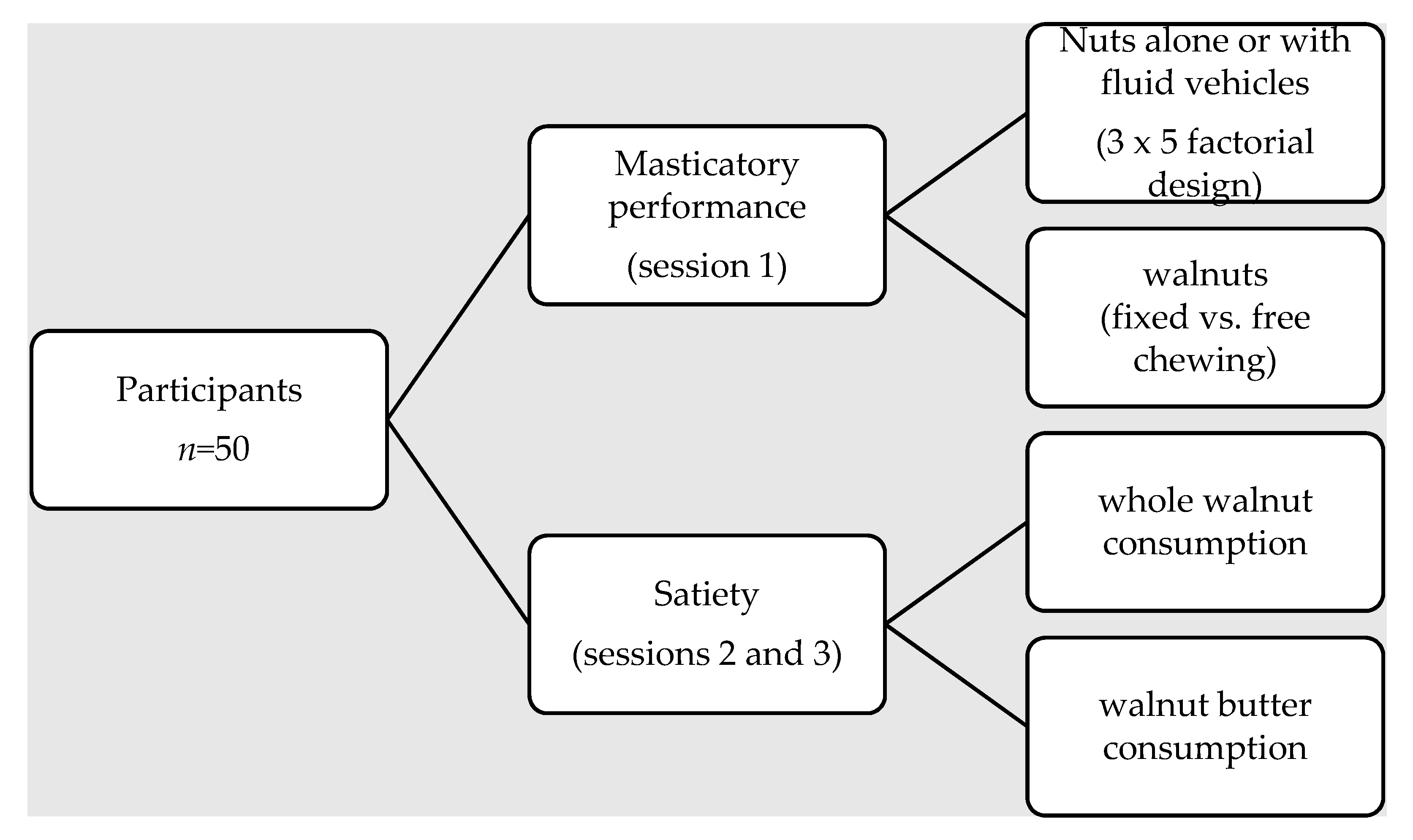 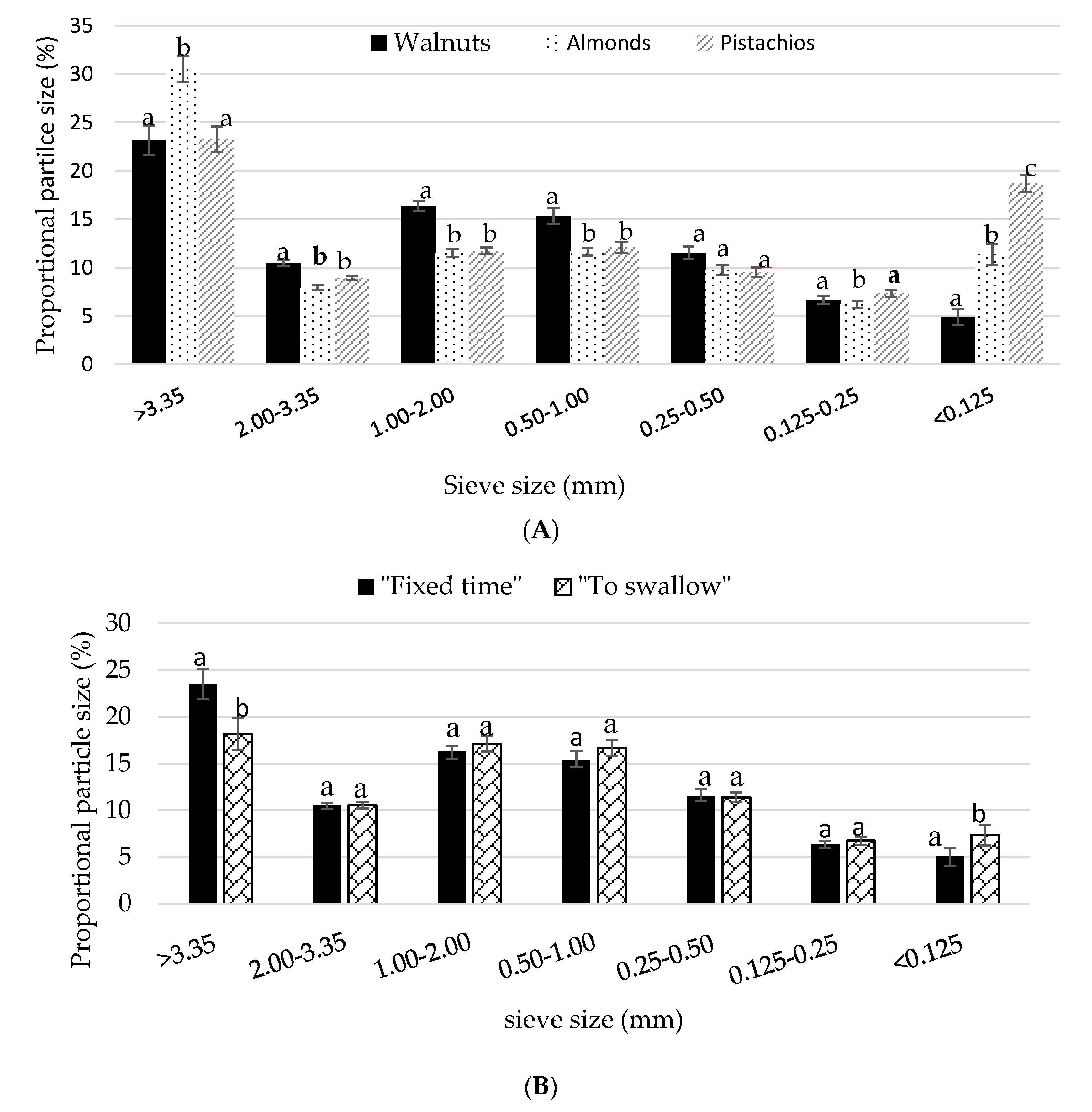 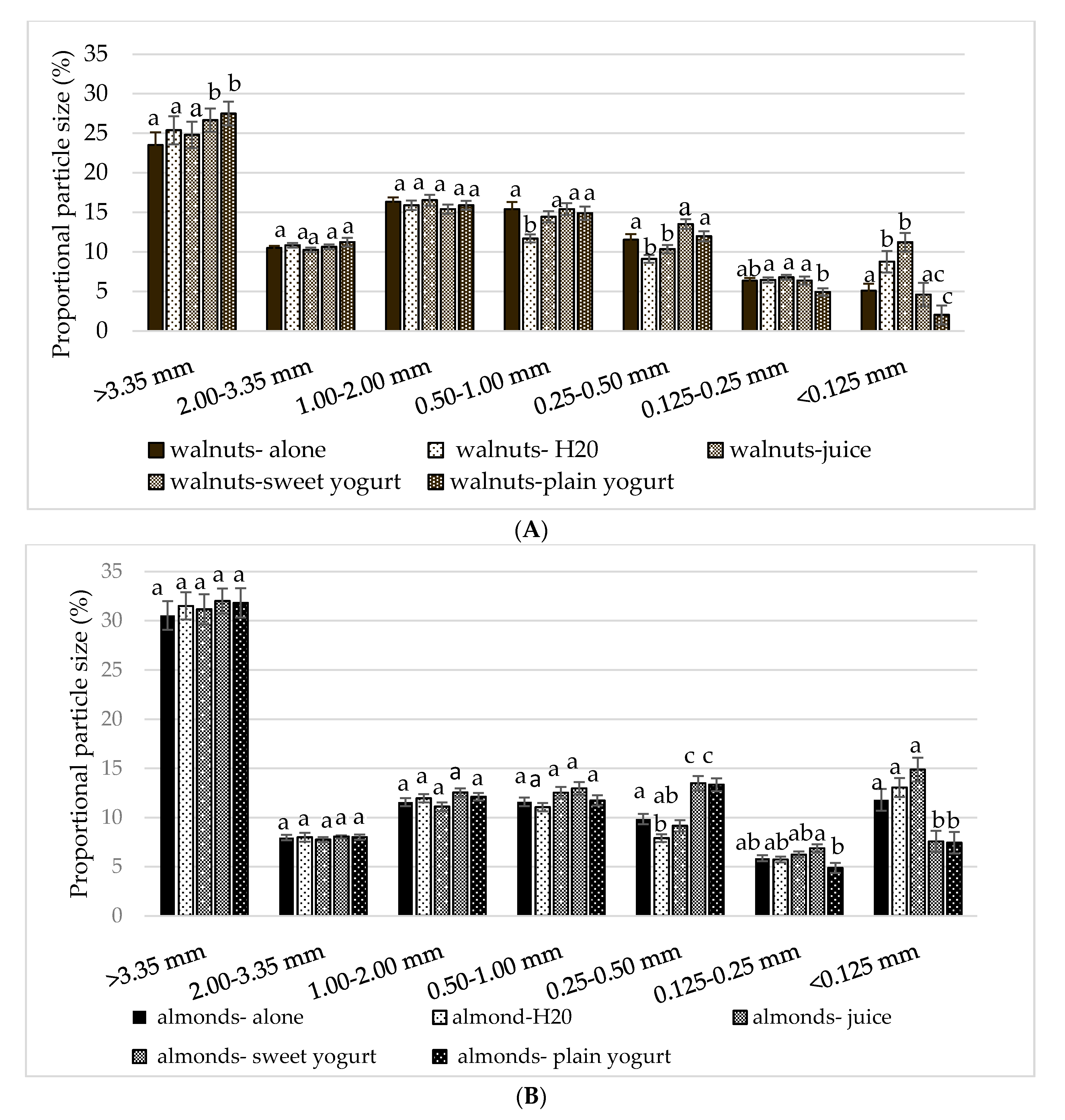 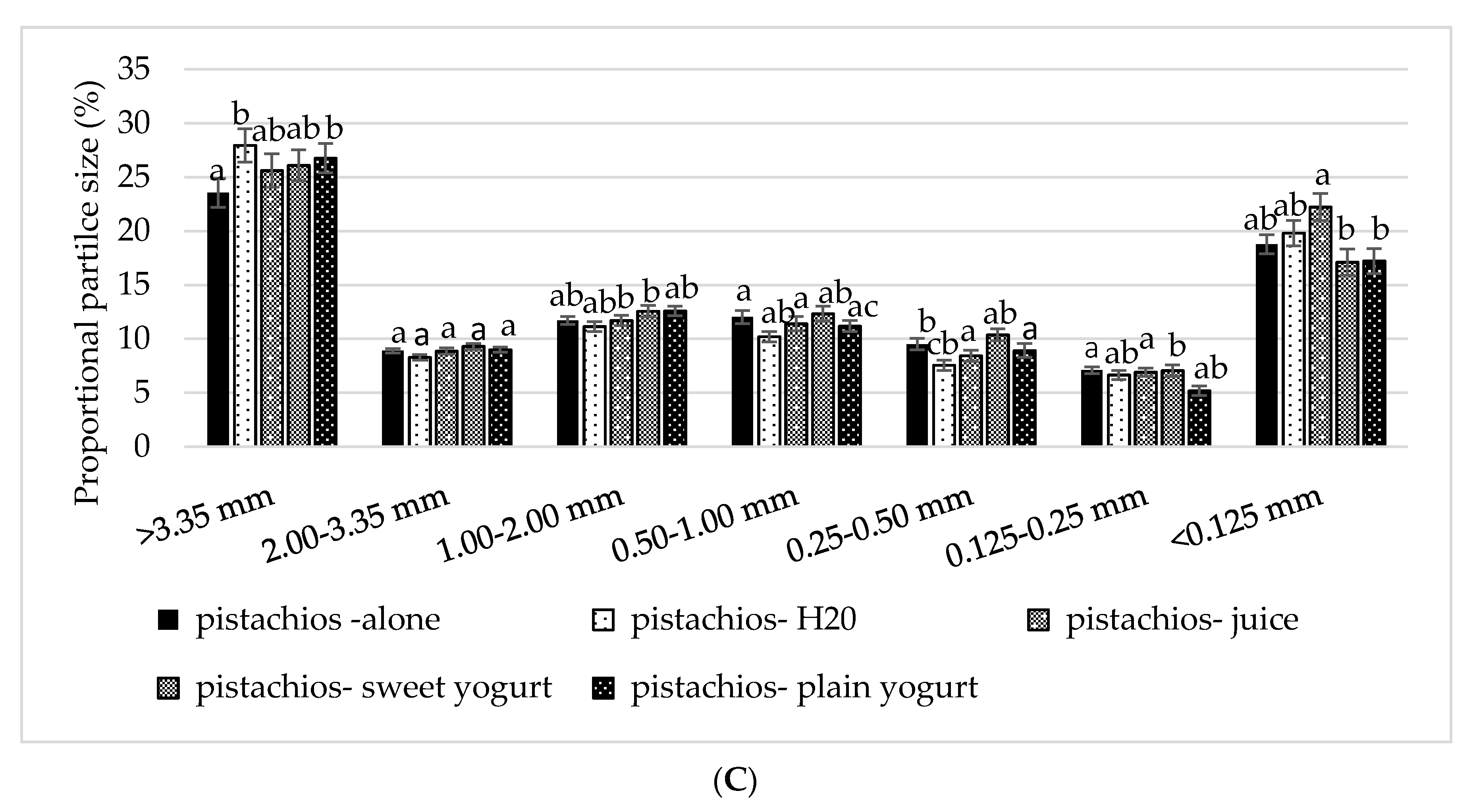 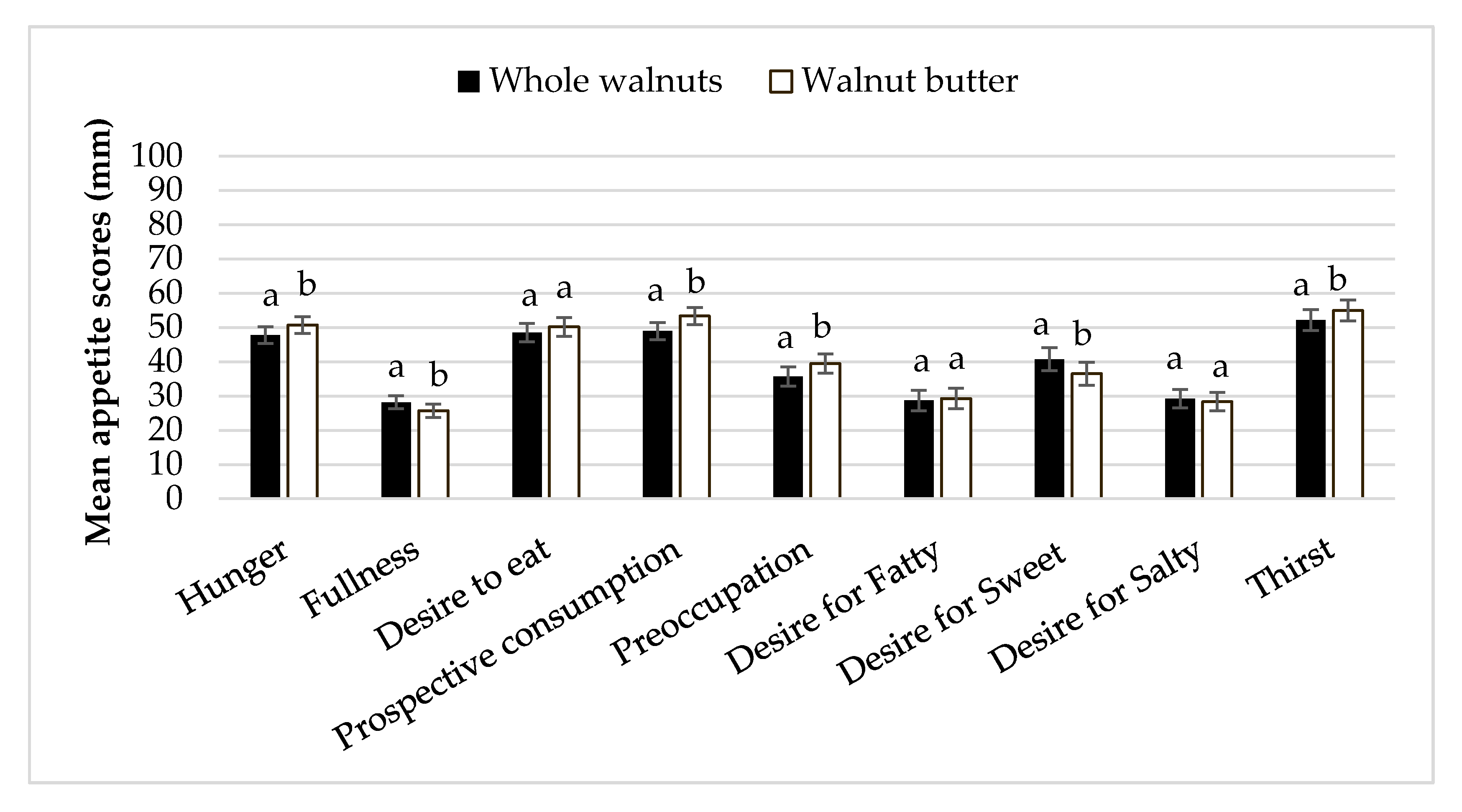 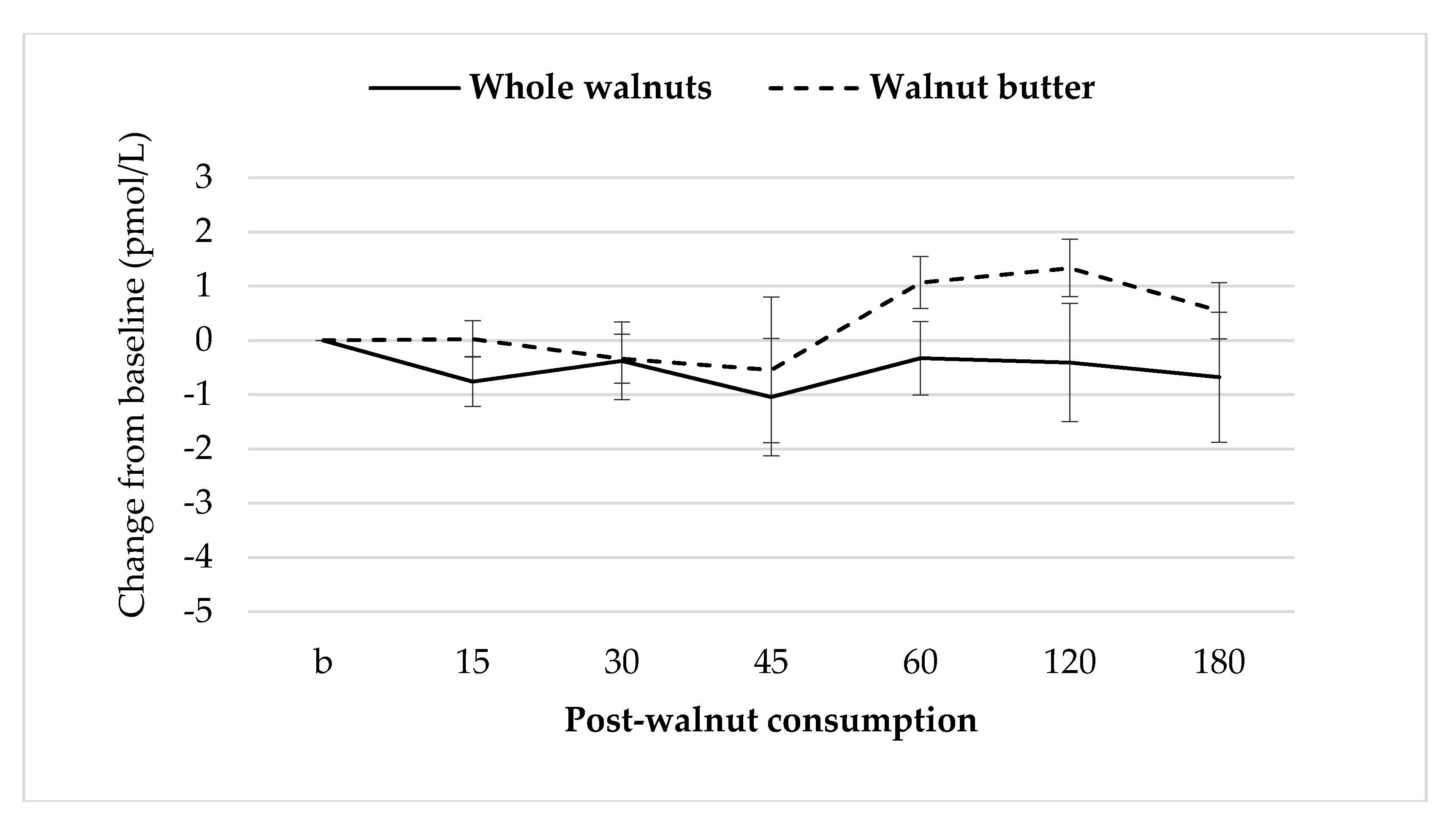