Osteoarthritis (OA) has become one of the most common disabilities among elders, especially in females. Obesity and mechanical injuries caused by OA are attributed to joint loading, cartilage disintegration, and bone loss, as well as inflammation. Pharmacological and non-pharmacological treatments can be used for OA. Fucoidan possesses several bioactivities such as antitumor, antiviral, anticoagulation, anti-obesity, and immunomodulation. This study aims to investigate the effect of fucoidan in surgery-induced OA on rats with diet-induced obesity. OA was induced by an anterior cruciate ligament transection and a partial medial meniscectomy (ACLT + MMx). The male SD rats were fed with a high-fat diet (HFD) for 4 weeks to induce obesity before causing ACLT + MMx to induce OA. The OA rats were administered with intragastric water or fucoidan in three different concentrations (32 mg/kg, 64 mg/kg, and 320 mg/kg) after the surgeries for 40 days with an HFD. We observed that the swelling in the knee joint was alleviated and the hind paw weight distribution was rectified after feeding them with fucoidan and that there was no significant effect on the weight gain and feed intake. Fucoidan administration indicated no significant variation on the high-density lipoprotein (HDL)-Cholesterol level, but it did indicate reduced plasma triglycerides and low-density lipoprotein (LDL)-Cholesterol levels. In addition, the weight-bearing tests showed an improvement in the fucoidan-treated group. Our results suggested that fucoidan may improve meniscal/ligamentous injury and obesity-induced OA. View Full-Text
Keywords: anterior cruciate ligament; fucoidan; meniscectomy; obesity; osteoarthritis anterior cruciate ligament; fucoidan; meniscectomy; obesity; osteoarthritis
►▼ Show Figures 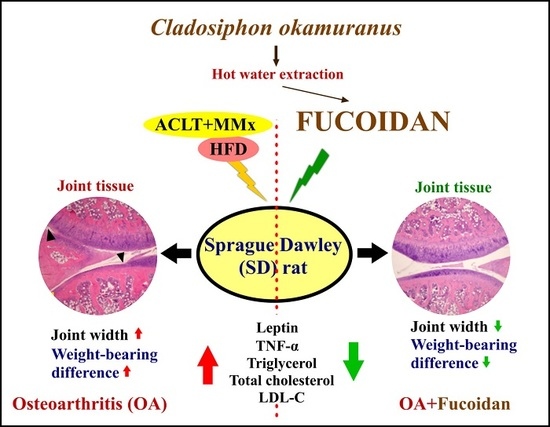