Comparison of the Incorporation of DHA in Circulatory and Neural Tissue When Provided as Triacylglycerol (TAG), Monoacylglycerol (MAG) or Phospholipids (PL) Provides New Insight into Fatty Acid Bioavailability
Next Article in Special Issue

An Overview of Whole Grain Regulations, Recommendations and Research across Southeast Asia
Previous Article in Journal

Buckwheat and CVD Risk Markers: A Systematic Review and Meta-Analysis

The effects of buckwheat intake on cardiovascular diseases (CVDs) have not been systematically investigated. The aim of the present study was to comprehensively summarize studies in humans and animals, evaluating the impact of buckwheat consumption on CVD risk markers and to conduct a meta-analysis of relevant data. Thirteen randomized, controlled human studies, two cross-sectional human studies and twenty-one animal studies were identified. Using random-effects models, the weighted mean difference of post-intervention concentrations of blood glucose, total cholesterol and triglycerides were significantly decreased following buckwheat intervention compared with controls [differences in blood glucose: −0.85 mmol/L (95% CI: −1.31, −0.39), total cholesterol: 0.50 mmol/L (95% CI: −0.80, −0.20) and triglycerides: 0.25 mmol/L (95% CI: −0.49, −0.02)]. Responses of a similar magnitude were seen in two cross-sectional studies. For animal studies, nineteen of twenty-one studies showed a significant reduction in total cholesterol of between 12% and 54%, and fourteen of twenty studies showed a significant reduction in triglycerides of between 2% and 74%. All exhibited high unexplained heterogeneity. There was inconsistency in HDL cholesterol outcomes in both human and animal studies. It remains unclear whether increased buckwheat intake significantly benefits other markers of CVD risk, such as weight, blood pressure, insulin, and LDL-cholesterol, and underlying mechanisms responsible for any effects are unclear. View Full-Text
Keywords: buckwheat; CVD risk markers; meta-analysis buckwheat; CVD risk markers; meta-analysis
►▼ Show Figures 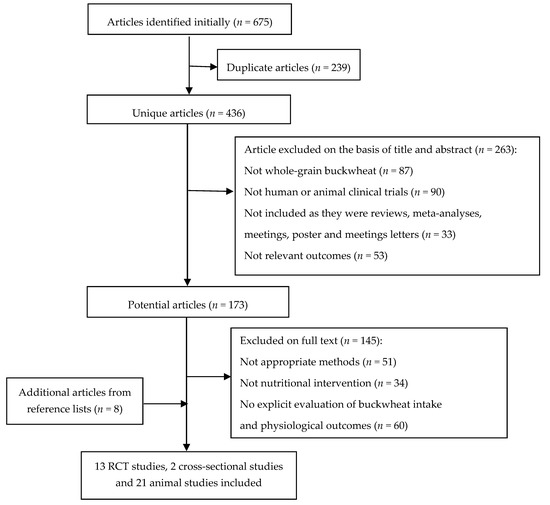