Sodium and Potassium Consumption in a Semi-Urban Area in Peru: Evaluation of a Population-Based 24-Hour Urine Collection
Previous Article in Journal

Regular walnut consumption is associated with better health. We have previously shown that eight weeks of walnut consumption (43 g/day) significantly improves lipids in healthy subjects. In the same study, gut microbiome was evaluated. We included 194 healthy subjects (134 females, 63 ± 7 years, BMI 25.1 ± 4.0 kg/m2) in a randomized, controlled, prospective, cross-over study. Following a nut-free run-in period, subjects were randomized to two diet phases (eight weeks each); 96 subjects first followed a walnut-enriched diet (43 g/day) and then switched to a nut-free diet, while 98 subjects followed the diets in reverse order. While consuming the walnut-enriched diet, subjects were advised to either reduce fat or carbohydrates or both to account for the additional calories. Fecal samples were collected from 135 subjects at the end of the walnut-diet and the control-diet period for microbiome analyses. The 16S rRNA gene sequencing data was clustered with a 97% similarity into Operational Taxonomic Units (OTUs). UniFrac distances were used to determine diversity between groups. Differential abundance was evaluated using the Kruskal–Wallis rank sum test. All analyses were performed using Rhea. Generalized UniFrac distance shows that walnut consumption significantly affects microbiome composition and diversity. Multidimensional scaling (metric and non-metric) indicates dissimilarities of approximately 5% between walnut and control (p = 0.02). The abundance of Ruminococcaceae and Bifidobacteria increased significantly (p < 0.02) while Clostridium sp. cluster XIVa species (Blautia; Anaerostipes) decreased significantly (p < 0.05) during walnut consumption. The effect of walnut consumption on the microbiome only marginally depended on whether subjects replaced fat, carbohydrates or both while on walnuts. Daily intake of 43 g walnuts over eight weeks significantly affects the gut microbiome by enhancing probiotic- and butyric acid-producing species in healthy individuals. Further evaluation is required to establish whether these changes are preserved during longer walnut consumption and how these are linked to the observed changes in lipid metabolism. View Full-Text
Keywords: walnuts; nuts; diet; gut microbiome; lipids; cholesterol; prebiotic; probiotic; butyric acid walnuts; nuts; diet; gut microbiome; lipids; cholesterol; prebiotic; probiotic; butyric acid
►▼ Show Figures 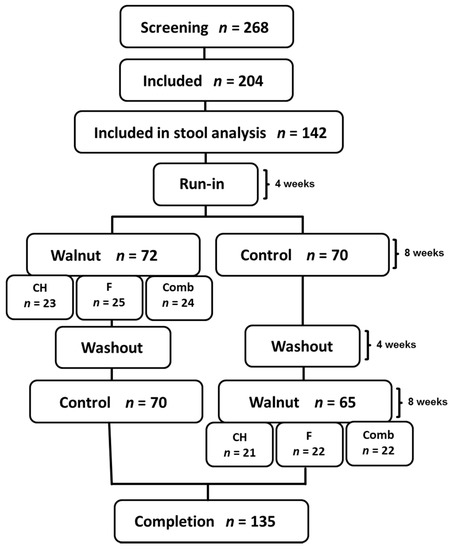