Dietary Balance Index-07 and the Risk of Anemia in Middle Aged and Elderly People in Southwest China: A Cross Sectional Study

:
Gestational diabetes mellitus (GDM) is a common complication of pregnancy, and it is mostly associated with postpartum diabetes, insulin resistance, and dyslipidemia. Fish oil (omega-3) supplementation has been shown to reduce the risk of different chronic diseases such as cardiovascular disease, type 2 diabetes, and cancers, though the evidence of its impact on gestational diabetes is scarce. Our goal in this study was to determine the effect of fish oil administration on gene expression related to insulin action, blood lipids, and inflammation in women with GDM. Participants with GDM (n = 40), aged 18–40 years, were randomized to take either 1000 mg fish oil capsules, containing 180 mg eicosapentaenoic acid and 120 mg docosahexaenoic acid (n = 20), or placebo (n = 20) twice a day for 6 weeks. Gene expression related to insulin, lipids, and inflammation was quantified in peripheral blood mononuclear cells (PBMCs) of GDM women using Reverse Transcription Polymerase Chain Reaction (RT-PCR) method. Results of RT-PCR indicated that omega-3 supplementation upregulated gene expression of peroxisome proliferator-activated receptor gamma (PPAR-γ) (P = 0.04) in PBMCs of patients with GDM, compared with the placebo. In addition, gene expression of the low-density lipoprotein receptor (LDLR) (P < 0.001), interleukin-1 (IL-1) (P = 0.007), and tumor necrosis factor alpha (TNF-α) (P = 0.01) was downregulated in PBMCs of women with GDM, following omega-3 supplementation. No significant effect of omega-3 supplementation was indicated on gene expression of IL-8 in PBMCs of patients with GDM. Overall, fish oil supplementation for 6 weeks in women with GDM significantly improved gene expression of PPAR-γ, IL-1, and TNF-α, but not gene expression of IL-8.
Keywords:
fish oil; gene expression; insulin; lipid; inflammation; gestational diabetes

This study was a 6-week randomized double-blinded placebo-controlled clinical trial that wasregistered with the website for registration of clinical trials in Iran (http://www.irct.ir: IRCT201610015623N90). Forty women aged 18–40 years with GDM, diagnosed based on the American Diabetes Association guidelines, without prior history of diabetes [20], were included. The study was conducted from July to October 2016. Study protocol was approved by the research ethics committee of Arak University of Medical Sciences (AUMS), and informed consent was taken from all participants. Exclusion criteria were as follows: taking fish oil supplements, insulin therapy, placenta abruption, pre-eclampsia, eclampsia, hypothyroidism, hyperthyroidism, and smokers.

Subjects were randomly divided into two groups to take either 1000 mg fish oil capsules, containing 180 mg eicosapentaenoic acid (EPA) and 120 mg docosahexaenoic acid (DHA) (n = 20) or placebo (n = 20) twice a day for 6 weeks. Randomization process was conducted using computer-generated random numbers by a trained staff at the clinic, blinded to both participants and researchers. Omega-3 and placebo capsules were produced by Barij Essence Pharmaceutical Company, Kashan, Iran, approved by Food and Drug Administration (FDA). They were completely identical in terms of their appearance, color, shape, size, smell, and taste and packaging.
To increase compliance rate, all participants received reminder messages on their cell phones every day to remind them to take their capsules. Compliance was evaluated by counting the remaining supplements and subtracting from the number of supplements provided to the participants. Subjects were requested not to change their routine physical activity or usual dietary intakes throughout the study and not to consume any supplements other than the one provided to them by the investigators, as well as not to take any medications that might affect the outcomes during the 6-week intervention. A 3-day food record was obtained at weeks 0, 3, 5, and 6 of the intervention, and macro- and micro-nutrients intakes were determined using the Modified Nutritionist-4 software program (First Databank, San Bruno, CA, USA). Physical activity was described as metabolic equivalents (METs) in hours per day [21].

Weight and height of participants were measured following an overnight fast, using a standard scale (Seca, Hamburg, Germany) at baseline and after 6-weeks’ treatment. BMI was calculated as weight in kg divided by height in meters squared. Weight and length of all newborns were measured in labor ward following the birth by a trained midwife by the use of standard methods (Seca 155 Scale, Hamburg, Germany). Infants’ head circumference was calculated to the nearest 1 mm with a Seca girth measuring tape. We also determined infants’ 1- and 5-min Apgar score as another measure of pregnancy outcome.

At baseline and after 6-week intervention, 10 mL fasting blood samples were taken at Arak reference laboratory. Then, PBMCs were isolated from blood samples of participants with GDM using 50% percoll (Sigma-Aldrich, Dorset, UK). Samples were taken for cell count and viability testing by trypan blue, RNA, and DNA extraction [25].

Fasting plasma glucose (FPG) concentrations were measured on the day of blood collection. Serum insulin concentrations were evaluated by the use of ELISA kit (DiaMetra, Milano, Italy) with inter- and intra-assay coefficient variances (CVs) of 3.4 to 4.7%, respectively. The homeostasis model of assessment-insulin resistance (HOMA-IR) was determined according to the standard formula [26]. Enzymatic kits (Pars Azmun, Tehran, Iran) were used to evaluate FPG, serum triglycerides, total-, and LDL- and HDL-cholesterol levels with inter-and intra-assay CVs lower than 5%. Serum high-sensitivity C-reactive protein (hs-CRP) concentrations were determined by an ELISA kit (LDN, Nordhorn, Germany) with inter- and intra-assay CVs lower than 7%, respectively.

The normality of study variables was determined using the Kolmogorov-Smirnov test. Outcome log-transformation was used if model residual has non-normal distribution (PPAR-γ, LDLR, IL-1 and TNF-α). Anthropometric measures, as well as macro-and micro-nutrient dietary intakes, were compared between the two groups, using independent samples t-test. The effects of omega-3 supplementation on gene expression related to insulin, lipid, and inflammation, and metabolic profiles, were assessed using independent samples t-test. Differences in proportions were evaluated by Fisher’s exact test. The P-value of <0.05 was considered statistically significant. All statistical analyses in this study were conducted using the Statistical Package for Social Science version 18 (SPSS Inc., Chicago, IL, USA).

At the beginning of the study, 60 patients with GDM were invited to enter the trial; however, 20 participants did not meet the inclusion criteria and were excluded from the study. Finally, 40 participants (placebo (n = 20) and omega-3 (n = 20)) completed the trial (Figure 1). Overall, the compliance rate was high, because more than 90% of capsules were consumed throughout the study in both groups.
Mean age, height, weight, BMI, and METs at baseline and after the 6-week treatment were not statistically different between omega 3 and placebo groups (Table 2).
The mean dietary macro-and micro-nutrient intakes at both baseline and the end of the trial, as well as throughout the intervention, were not significantly different between the two groups (Data not shown).
After the 6-week intervention, compared with the placebo, omega-3 supplementation led to a significant reduction in FPG (−4.4 ± 2.3 vs. +2.9 ± 14.3 mg/dL, P = 0.02) and serum triglycerides (−8.3 ± 28.3 vs. +15.7 ± 29.9 mg/dL, P = 0.01), and a significant increase in LDL- (+11.2 ± 13.5 vs. +1.6 ± 15.2 mg/dL, P = 0.04) and HDL-cholesterol levels (+2.9 ± 3.9 vs. −0.7 ± 5.8 mg/dL, P = 0.02) (Table 3). In addition, taking omega-3 supplements was associated with a significant reduction in hs-CRP (−3375.7 ± 4836.8 vs. +82.8 ± 3149.7 ng/mL, P = 0.01) compared with the placebo. Omega-3 supplementation did not affect serum insulin, total cholesterol levels, and HOMA-IR compared with the placebo.
We did not find a significant difference in polyhydramnios, gestational age, newborn’s birth size, or Apgar scores when comparing the two groups (Table 4).
RT-PCR quantitative results showed significant upregulation of gene expression of PPAR-γ (P = 0.04) in PBMCs of patients with GDM following omega-3 supplementation, rather than placebo (Figure 2). We also found that compared with the placebo, omega-3 administration downregulated gene expression of LDLR (P < 0.001) in PBMCs of participants with GDM (Figure 3).
Regarding inflammatory markers, omega-3 supplementation significantly downregulated gene expression of IL-1 (P = 0.007) and TNF-α (P = 0.01) in PBMCs of patients with GDM; however, it did not affect gene expression of IL-8 (Figure 4).

This study was founded by a grant from the Vice-chancellor for Research, AUMS, and Iran. 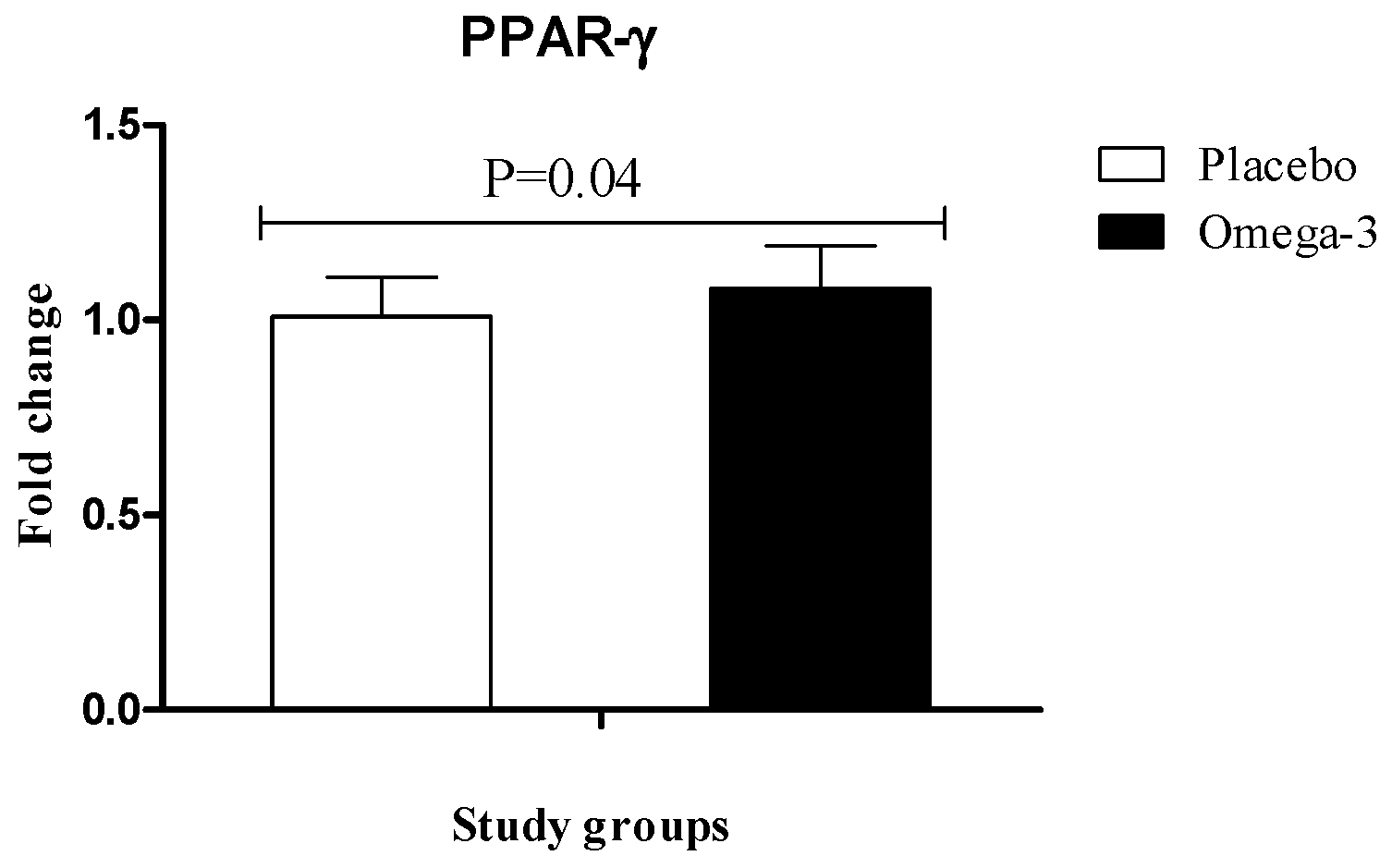