Periodontal disease damages tissues as a result of dysregulated host responses against the chronic bacterial biofilm insult and approximately 50% of US adults >30 years old exhibit periodontitis. The association of five blood nutrients and periodontitis were evaluated due to our previous findings regarding a potential protective effect for these nutrients in periodontal disease derived from the US population sampled as part of the National Health and Nutrition Examination Survey (1999–2004). Data from over 15,000 subjects was analyzed for blood levels of cis-β-carotene, β-cryptoxanthin, folate, vitamin D, and vitamin E, linked with analysis of the presence and severity of periodontitis. Moderate/severe disease patients had lower cis-β-carotene levels across all racial/ethnic groups and these decreased levels in moderate/severe periodontitis were exacerbated with age. β-cryptoxanthin demonstrated lower levels in severe disease patients across the entire age range in all racial/ethnic groups. Folate differences were evident across the various age groups with consistently lower levels in periodontitis patients >30 years and most pronounced in females. Lower levels of vitamin D were consistently noted across the entire age range of patients with a greater difference seen in females with periodontitis. Finally, an analytical approach to identify interactions among these nutrients related to age and periodontitis showed interactions of vitamin D in females, and folate with race in the population. These findings suggest that improving specific nutrient intake leading to elevated blood levels of a combination of these protective factors may provide a novel strategy to affect the significant increase in periodontitis that occurs with aging.
Keywords: nutrients; periodontitis; aging nutrients; periodontitis; aging

Periodontitis and dental caries remain the two major oral health maladies across the lifespan in the United States [1]. The National Health and Nutrition Examination Survey (NHANES) (2009–2012) reported that approximately 50% of US adults greater than 30 years old exhibit periodontitis, with minorities and older individuals being disproportionately affected [2]. Based on the Global Burden of Disease 2010 study, severe periodontitis is a significant health burden, affecting approximately 743 million people [3]. Periodontal disease damages tissues as a result of dysregulated host responses against the chronic bacterial biofilm insult [4,5,6]. It represents the primary basis of adult tooth loss, substantially affecting the individual’s quality of life [7,8,9]. Similar to many chronic diseases, periodontal disease is a complex disease driven by genetic and epigenetic influences, patient behaviors, medication use, and/or environmental factors that promote periodontal disease initiation and progression [10]. Moreover, smoking is clearly one of the most significant modifiable risk factors in the pathogenesis of periodontitis and disease extent and severity [11,12].
Considerable effort has occurred in attempting to define various genetic influences on the population-based extent and severity of the disease [13,14,15,16]. These studies have identified some unique subpopulations with clearly altered host functions that increase susceptibility, based on various single nucleotide polymorphisms (SNP) or mutations including genes controlling the production of inflammatory mediators and tissue and bone regulatory molecules [17,18,19,20,21,22], as well as some genome-wide association studies (GWAS) that have attempted to identify gene(s) that confer risk for disease [14,19,23,24,25]. More recent reports have also described epigenetic alterations in the genomes of periodontitis patients [26,27,28,29,30,31,32]. However, with complex diseases, such as periodontitis, there are likely a plethora of critical gene–environment interactions that occur to alter individual risk and enable gene effects to help explain disease phenotypes.
Environmental epidemiology focuses on the discovery of environmental exposures that contribute to or protect against diseases and the identification of public health actions to effectively manage the risks associated with harmful exposures. Environmental exposures can be involuntary or represent occupational exposures and voluntary exposures such as smoking, medications, and diet. While periodontitis is a localized inflammatory process mediating destruction of soft and hard periodontal tissues [33] resulting from the chronic disruption of the oral epithelial barrier, this disease triggers systemic inflammatory host responses that may contribute to other systemic conditions (e.g., cardiovascular disease, diabetes, Alzheimer’s disease [34,35,36,37]). Additionally, the systemic contribution to the microenvironment in periodontal tissues is a critical component for maintaining homeostasis or influencing the progression of disease [38]. This breadth of data identifies the need for optimal oral health as an integral component of the prevention and management of chronic health conditions.
Observational studies have shown a strong correlation between the intake of fruits and vegetables and other antioxidant nutrients, with oral health-related quality of life in adults [39,40,41,42]. These effects have been mainly attributed to their function in reducing oxidative stress and inflammation, and were related to intake of β-carotene, vitamin C, a-tocopherol, and omega-3-fatty acids [33,43,44]. However, while dietary nutrients and specific bioactive compounds have emerged as influential factors in the etiology and progression of periodontitis [45], a recent systematic review [46] emphasized associations, but also the general lack of clear data supporting causal relationships.
We have reported on an Environment-Wide Association Study of periodontitis in data derived from the National Health and Nutrition Examination Survey from 1999–2004 [47]. These findings identified a number of environmental toxins/factors that significantly increased the prevalence of periodontitis, particularly related to age, race/ethnicity, and smoking status. However, we also noted a number of serum nutrients that were significantly negatively associated with the prevalence, including cis-β-carotene, vitamin D, vitamin E, folate, and β-cryptoxanthin. These findings are consistent with recent NHANES reports on cis-β-carotene and peripheral artery disease [48] and for cis-β-carotene, vitamin D, vitamin E, and β-cryptoxanthin coupled with physical activity in lowering the risk for metabolic syndrome [49]. Linden et al. [50] also reported elevated levels of cis-β-carotene and β-cryptoxanthin in males from 60–70 years of age associated with decreased periodontitis.
While these reports are promising, further research deserves urgent attention given the high prevalence of periodontitis in the US and global population. Based on the results from various experimental models and clinical studies, designing dietary or supplemental formulations may present as an emerging line of natural therapy for periodontitis and to maximize population levels of oral health.

In this study, periodontal examination data from public-use data files for three NHANES cohorts—1999–2000, 2001–2002, 2003–2004—were extracted and combined to comprise the study population. These surveys, using the same methods, assessed the health status of a nationally representative sample of the civilian non-institutionalized US population, selected through a stratified multistage probability sampling design. Full descriptions of the sample design for these NHANES datasets are publically available [51]. NHANES 1999–2000 (N = 9956), 2001–2002 (N = 10,477), and 2003–2004 (N = 9643) enlisted persons 1 month of age or older. Among the 11,837 participants who were equal to and older than 18 years of age and had 16 or more teeth, 3745 were collected in the first cohort (1999–2000), 4258 in the second cohort (2001–2002), and 3834 in the third cohort (2003–2004). Those with missing smoking status and periodontal parameters were excluded leaving a final analytical sample of 8884 participants (1999–2000: 2738; 2001–2002: 3294; 2003–2004: 2852). The NHANES is a complex, multistage probability sample of non-institutionalized US civilians and subsequently organized into six unique datasets derived from 2-year cycle population sampling (Centers for Disease Control and Prevention; National Center for Health Statistics). Each 2-year survey cycle examines a representative US sample of approximately 10,000 persons and collects health-related data.

The analysis included only the records of adults 18 years or older who had a periodontal examination during the NHANES 1999–2000 (N = 5206), 2001–2002 (N = 5587), and 2003–2004 (N = 5051). Thus, the combined sample for clinical data was 15,844.
Dentists trained in the survey examination protocol conducted the periodontal examinations collecting probing depth and attachment loss measurements [52,53,54]. Periodontitis was defined as a site with clinical attachment loss (CAL) ≥3 mm and a periodontal pocket ≥4 mm. NHANES (1999–2004) used the partial-mouth periodontal examination (PMPE) protocol to sample teeth and sites. The PMPE protocols randomly selected two quadrants of the mouth and specified two to three sites per tooth for measurement of pocket depth, attachment loss, and bleed on probing. In 1999–2000, two sites per tooth (mid-facial and mesio-facial) were measured, while three sites per tooth (mid-facial, mesio-facial, and distal) were measured in 2001–2002 and 2003–2004. A periodontal site was defined as a pocket site with ≥3 mm CAL and ≥4 mm PD (Health and Human Services Vital and Health Statistics Series 11 Report). The gold standard of diagnosing periodontitis using full-mouth examination protocol yields an approximated prevalence of 22.4% [55,56]. The half-mouth (16 teeth) examination protocol utilized by NHANES is known to underestimate the national prevalence rate since periodontitis is site-specific and not evenly distributed in the mouth [55]. Thus, case definition of Series 11 was chosen because it yielded an estimate (16.9%) in NHANES 2001–2004 that was closest to the gold standard. The level of periodontitis—mild, moderate, and severe—was defined as described by Page and Eke [56].

The environmental factors were categorized into 15 classes based on NHANES categorization. Environmental variables measured in at least one of the three data cohorts (i.e., 1999–2004) were included in the study. A total of 156 environmental factors were measured in the NHANES data using blood and urine samples. These included chemical toxicants, pollutants, allergens, bacterial/viral organisms, and nutrients. Within the nutrient category there were 16 measures, as shown in Table S2. Factors with laboratory measurements that had greater than 10% of the observations below a detection limit threshold defined by NHANES were omitted from analysis. The laboratory measurements using mass spectrometry and absorption spectroscopy demonstrated that the majority of the variables were detected in small ranges and were skewed. Thus, all environmental variables were log-transformed (natural) and standardized and referred to as “processed”. Levels presented were back-transformed from log-scale values.

Descriptive statistics were calculated for each serum nutrient, and data are presented as means and one standard deviation, and stratified by severity of periodontitis, race, and smoking status. Survey-weighted logistic regressions were performed for each of the processed environmental factors, adjusting for age, gender, ethnicity, socio-economic status, smoking status, and number of teeth. The R package “survey” was used in R (Version 3.1.2) for the survey-weighted logistic regression [57]. Weights were constructed in SAS (Version 9.4, Cary, NC, USA) using a 6 year weighting design from the NHANES variable WTMEC2YR73 [58]. Adjusted odds ratios were calculated with 95% confidence intervals and were provided to demonstrate the association between the individual factors and periodontitis. These regressions were repeated by smoking status to examine potential associations within smoking categories.
Using survey-weighted logistic regressions, subgroup specific effects were explored using the feasible solution algorithm (FSA) [59]. The FSA can be employed to identify complex subgroup specific effects in datasets with many variables (such as the NHANES dataset). Subgroup specific effects were identified using FSA by checking for the statistical significance of two-way interactions. The FSA is very flexible in the interactions it seeks to identify and can limit the variables it uses in the procedure. In these analyses, we sought to identify nutrient interactions between age, sex, or race/ethnicity. Because this process was exploratory in nature, interactions were searched for with the adjustment of other known covariates or confounders. The odds ratios for the interactions identified are reported as well as their 95% confidence intervals.

This research was funded by U.S.P.H.S. grant GM103538, GM103440, and from the Center for Oral Health Research at the University of Kentucky College of Dentistry.

We want to acknowledge the support of U.S.P.H.S. grant GM103538 to the Center for Biomedical Research Excellence, and funding from the Center for Oral Health Research at the University of Kentucky College of Dentistry. We also acknowledge the support for Basu and Ebersole from the NIGMS INBRE program GM 103440. This reports contents are solely the responsibility of the authors and do not necessarily represent the official views of NIH.

The authors state no conflict of interest. 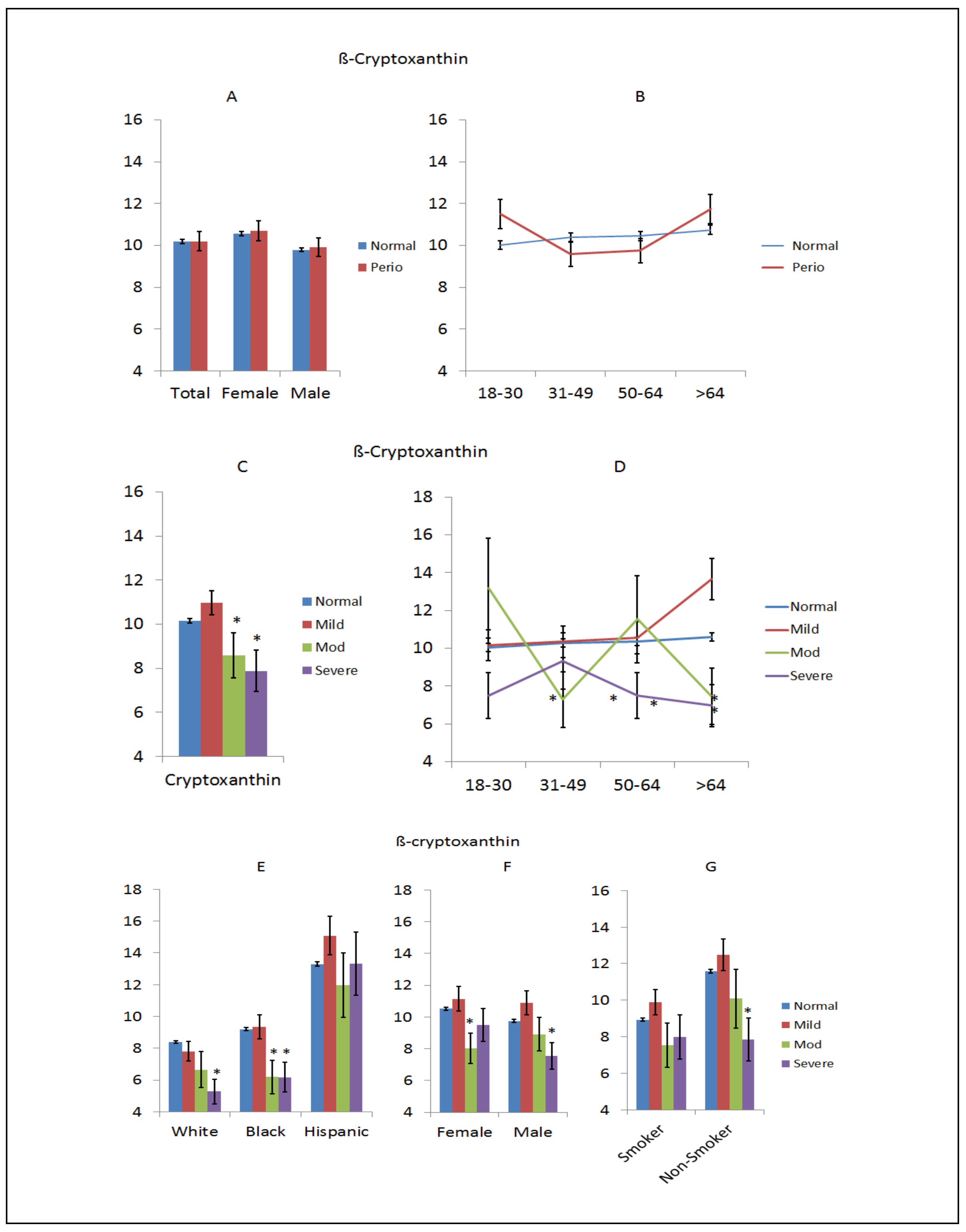