Periodontal disease damages tissues as a result of dysregulated host responses against the chronic bacterial biofilm insult and approximately 50% of US adults >30 years old exhibit periodontitis. The association of five blood nutrients and periodontitis were evaluated due to our previous findings regarding a potential protective effect for these nutrients in periodontal disease derived from the US population sampled as part of the National Health and Nutrition Examination Survey (1999–2004). Data from over 15,000 subjects was analyzed for blood levels of cis-β-carotene, β-cryptoxanthin, folate, vitamin D, and vitamin E, linked with analysis of the presence and severity of periodontitis. Moderate/severe disease patients had lower cis-β-carotene levels across all racial/ethnic groups and these decreased levels in moderate/severe periodontitis were exacerbated with age. β-cryptoxanthin demonstrated lower levels in severe disease patients across the entire age range in all racial/ethnic groups. Folate differences were evident across the various age groups with consistently lower levels in periodontitis patients >30 years and most pronounced in females. Lower levels of vitamin D were consistently noted across the entire age range of patients with a greater difference seen in females with periodontitis. Finally, an analytical approach to identify interactions among these nutrients related to age and periodontitis showed interactions of vitamin D in females, and folate with race in the population. These findings suggest that improving specific nutrient intake leading to elevated blood levels of a combination of these protective factors may provide a novel strategy to affect the significant increase in periodontitis that occurs with aging. View Full-Text
Keywords: nutrients; periodontitis; aging nutrients; periodontitis; aging
►▼ Show Figures 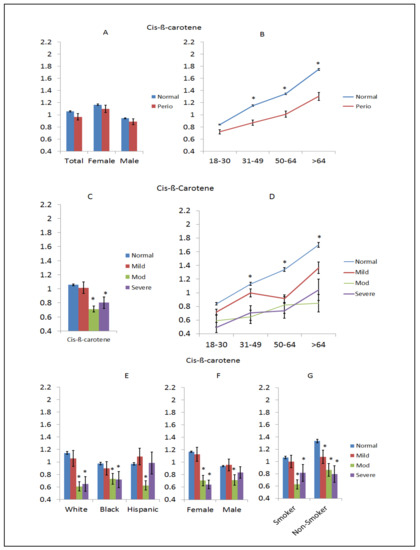