The Effect of a High-Dose Vitamin B Multivitamin Supplement on the Relationship between Brain Metabolism and Blood Biomarkers of Oxidative Stress: A Randomized Control Trial

A diet rich in B-group vitamins is essential for optimal body and brain function, and insufficient amounts of such vitamins have been associated with higher levels of neural inflammation and oxidative stress, as marked by increased blood plasma homocysteine. Neural biomarkers of oxidative stress quantified through proton magnetic spectroscopy (1H-MRS) are not well understood, and the relationship between such neural and blood biomarkers is seldom studied. The current study addresses this gap by investigating the direct effect of 6-month high-dose B-group vitamin supplementation on neural and blood biomarkers of metabolism. Using a randomized, double-blind, placebo-controlled design, 32 healthy adults (20 female, 12 male) aged 30–65 years underwent blood tests (vitamin B6, vitamin B12, folate, and homocysteine levels) and 1H-MRS of the posterior cingulate cortex (PCC) and dorsolateral prefrontal cortex (DLPFC) before and after supplementation. Results confirmed the supplement was effective in increasing vitamin B6 and vitamin B12 levels and reducing homocysteine, whereas there was no change in folate levels. There were significant relationships between vitamin B6 and N-acetylaspartate (NAA), choline, and creatine, as well as between vitamin B12 and creatine (ps < 0.05), whereas NAA in the PCC increased, albeit not significantly (p > 0.05). Together these data provide preliminary evidence for the efficacy of high-dose B-group supplementation in reducing oxidative stress and inflammation through increasing oxidative metabolism. It may also promote myelination, cellular metabolism, and energy storage.
Keywords: B vitamins; multivitamin; 1H-MRS; homocysteine; oxidative stress; posterior cingulate cortex; NAA; creatine B vitamins; multivitamin; 1H-MRS; homocysteine; oxidative stress; posterior cingulate cortex; NAA; creatine

These data were collected as part of a larger (n = 200) randomised, placebo-controlled, double-blind parallel groups design investigating the effects of Blackmores® Executive B Stress Formula on the primary outcome of work-related stress, as well as on a range of secondary cognitive, stress, mood, health, personality, cardiovascular, biochemical, genetic, and neuroimaging outcomes [30]. The 1H-MRS data from the smaller neuroimaging sub-study (n = 39) are the focus of this paper. The study was registered with the Australian and New Zealand Clinical Trials Registry (ACTRN12613000294752), and was approved by the Swinburne University Research Ethics Committee (SUHREC 2012/293). All participants provided written informed consent to participate in the study.

Of the 39 adults aged 30 to 65 years (25 female, 14 male) enrolled in the neuroimaging sub-study, a total of 36 underwent 1H-MRS at baseline (female, male), and 33 participants at 6 months (21 female, 12 male). See Table 1 for characteristics of the final sample and Figure S1 for participant enrollment flow chart. Participants in the 1H-MRS sub-study were enrolled starting in February 2014, with testing ceasing in December 2016. Participants were non-smokers, not heavy consumers of alcohol (i.e., females consumed <14 standard drinks per week, whereas males consumed <28 standard drinks per week), not current or past illicit drug users, and did not have a history of psychiatric illness (history of anxiety, depression, psychiatric disorders), epilepsy, or a neurological condition. A medical screening was conducted to confirm the above criteria and to confirm the absence of clinically relevant abnormalities in their medical history that would render them ineligible for Magnetic Resonance Imaging (MRI) (e.g., claustrophobia, metal implant, cardiac pacemaker or defibrillator, spinal cord stimulator, or pregnancy). Participants were asked to refrain from drinking alcohol for 24 h prior to the scheduled study day, and to not drink caffeine 12 h prior to the study time.

Participants attended the Centre for Human Psychopharmacology at Swinburne University for three separate sessions. Following telephone screening for initial eligibility, participants attended a screening session in which eligibility was confirmed by the investigators. Eligible participants were randomized into placebo (n = 20) or active (n = 19) treatment conditions by random allocation using a computerized random number generator by a disinterested third party, ensuring all investigators remained blind to the treatment allocation. Participants then attended a pretreatment (baseline) testing session and a post-treatment testing session 6 months later. At the end of the screening session, enrolled participants were provided their assigned treatment and administration instructions as detailed in the “Treatment” section below.
At the baseline and 6-month testing sessions, participants completed a food frequency questionnaire, provided fasted blood samples for plasma vitamin B12, vitamin B6, homocysteine, and red blood cell folate, and underwent 1H-MRS to quantify low molecular weighted metabolites: NAA, creatine, and choline in the PCC and left DLPFC. Biochemical and 1H-MRS data collection methods are detailed in data collection sections below. Participants were contacted monthly to record any significant life or diet events that may have occurred and to check that they were taking tablets daily. The remaining tablets were counted at the 6-month testing session to ensure compliance with the treatment schedule.

Active and placebo treatments were in the form of large dark brown film-coated cream tablets, matched in color and size, and were manufactured by Blackmores® Australia. The nutrients doses of each tablet are detailed in Table 2, as well as the nutrients’ percentage of recommended daily intake according to the National Health and Medical Research Council of Australia [31]. All B vitamin doses were well above the recommended daily intake for adults aged 30–70 years, except biotin (vitamin B7, 66.7–80%) and folic acid (vitamin B9, 37.5%), confirming the supplement contained a high dose of B vitamins overall.
Participants were provided the treatment in unmarked bottles and instructed to take two tablets daily, one at breakfast and one at lunch, for the duration of 6 months. Each participant received enough tablets for 6 months, along with an additional week of tablets in case the post-treatment visit date was delayed, resulting in 350 tablets in total. To prevent any acute supplementation effects, participants were asked not to take any tablets on the day of their post-treatment testing session. Blackmores® Executive B Stress Formula is available over the counter. The placebo tablets contained a small amount of glucose and riboflavin (B2, 2 mg) to be matched for colour and taste and to provide a similar urine coloration effect. No adverse events were reported as a result of the active or placebo treatment, or as a result of the study procedures.

Blood sampling was conducted via venepuncture on each of the testing days following a period of fasting from the night before at the testing site by a registered nurse. Blood biomarkers of vitamin B12, vitamin B6, folate, and homocysteine were obtained. Additionally, safety profiling was measured through a full blood count, high-sensitivity C-reactive protein, and biochemical liver function tests.

Analyses were conducted with TARQUIN version 4.3.7, which estimates signal amplitude using a non-negative least-squares projection of a parametrised basis set in the time domain [33]. Eddy current correction was applied. For both PCC and DLPFC voxels, data were excluded if (a) the signal-to-noise ratio (SNR) was less than 10, (b) the water line width (FWHMwater) was greater than 12 Hz, or (c) the visual inspection failed. Two female participants’ PCC data were excluded from statistical analyses (FWHMwater > 12 Hz), and one female participant’s data were excluded due to being an extreme value (placebo n = 2, active n = 1). There were no group differences in SNR, FWHMwater, grey matter, white matter, and cerebrospinal fluid (CSF, see Table 3 for final sample fit statistics). Of the DLPFC data, over half of the spectra did not meet fit inclusion criteria, and therefore all DLPFC data were excluded from further analyses. All metabolite concentrations were corrected for voxel CSF ratio and water concentration (due to water scaling) using the following formula [34]:
Mcorr = M ∗ (WM + GM + 1.55 × CSF)/(WM + GM),
where Mcorr is the corrected metabolite concentration, M is the original metabolite concentration, and WM and GM are white matter and grey matter percentages, respectively.

Based on estimates from a 12-week intervention of an omega-3 supplement on brain metabolites [35], power analysis suggested that for fixed effects mixed linear models to detect a large effect (f2 = 0.5, α = 0.05, power = 0.8, 2 groups), 34 participants were required (G*Power version 3.1: http://www.gpower.hhu.de/, Heinrich-Heine-Universität Düsseldorf, Germany). A series of linear mixed effects analyses with restricted maximum likelihood were conducted to investigate the effect of the treatment on blood biomarker and brain metabolites concentrations in the PCC. Treatment group (active vs. placebo), time (baseline vs. 6 months), and their interaction were entered as fixed effects, and the intercept for subject was entered as a random effect to account for within-subject variability. Although there were no significant group differences in age (p > 0.1), age was entered as a covariate given its effect on brain metabolite concentrations. There were no differences in dietary intake across food groups between the groups (ps > 0.1).
Spearman’s rho (ρ) rank order correlation coefficients probed the relationship between blood biomarkers and metabolite concentrations in the PCC. This method is less sensitive to univariate outliers and non-normal data [36]. A p-value of <0.05 was deemed significant. All group by time interactions and Spearman’s rank order correlation p-values were adjusted for false discovery rate (FDR, q) using the fdrtool in R [37]. All analyses were conducted using jamovi and the GAMLj package [38].

Separate mixed linear models were conducted to test the effect of the treatment group (active vs. placebo) and time (baseline vs. 6 months) on metabolite concentrations in the PCC (NAA, choline, and creatine). Means and standard errors by group and time are presented in Table 4. There were no significant group by time interactions (p > 0.05, Figure 1), suggesting no effect of the treatment on any of the metabolite concentrations in the PCC. Visual inspection of the concentrations suggests that the treatment intervention led to an increase in PCC NAA concentration (Figure 1a). However, this increase was not statistically significant (F [1, 26.07] = 1.78, b = 0.10, 95% CI [−0.04, 0.24], p = 0.194).

This study was the first to investigate the efficacy of high-dose B vitamin multivitamin supplementation in modulating the relationship between neural and blood biomarkers of oxidative stress. Blackmore’s® Executive B Stress Formula was shown to reduce blood markers for oxidative stress (homocysteine) and increase brain markers for oxidative metabolism and myelination, but not energy or cellular membrane metabolism. Increasing levels of blood high-dose B-group vitamins were also associated with increased neural metabolism. These findings suggest that high-dose B-group vitamin supplementation might be effective in reducing oxidative stress and inflammation through increasing oxidative metabolism, and may promote myelination, cellular metabolism, and energy storage. Together, these findings highlight the importance of B-group vitamins in the maintenance of brain health in healthy adults and may have important implications in the prevention and alleviation of disease and disability.

This study was funded by Blackmores® Australia, who provided the Blackmores® Executive B Stress Formula for the larger intervention study. Associate Professor Luke Downey is supported by a National Health and Medical Research Council (NH & MRC) Career Development Fellowship (APP1122577). Tamara Simpson is funded by an Australian Postgraduate Award scholarship. 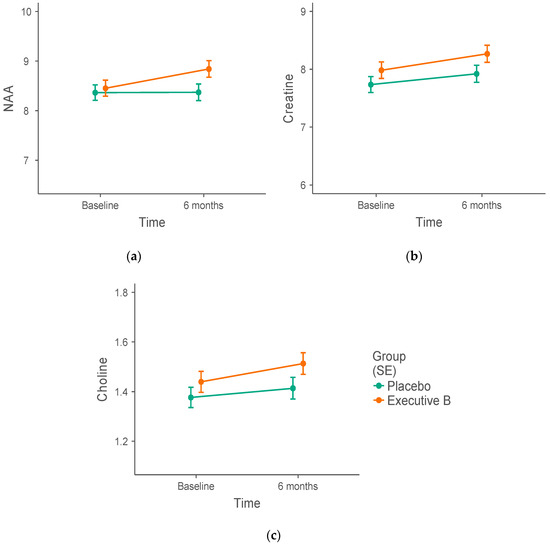 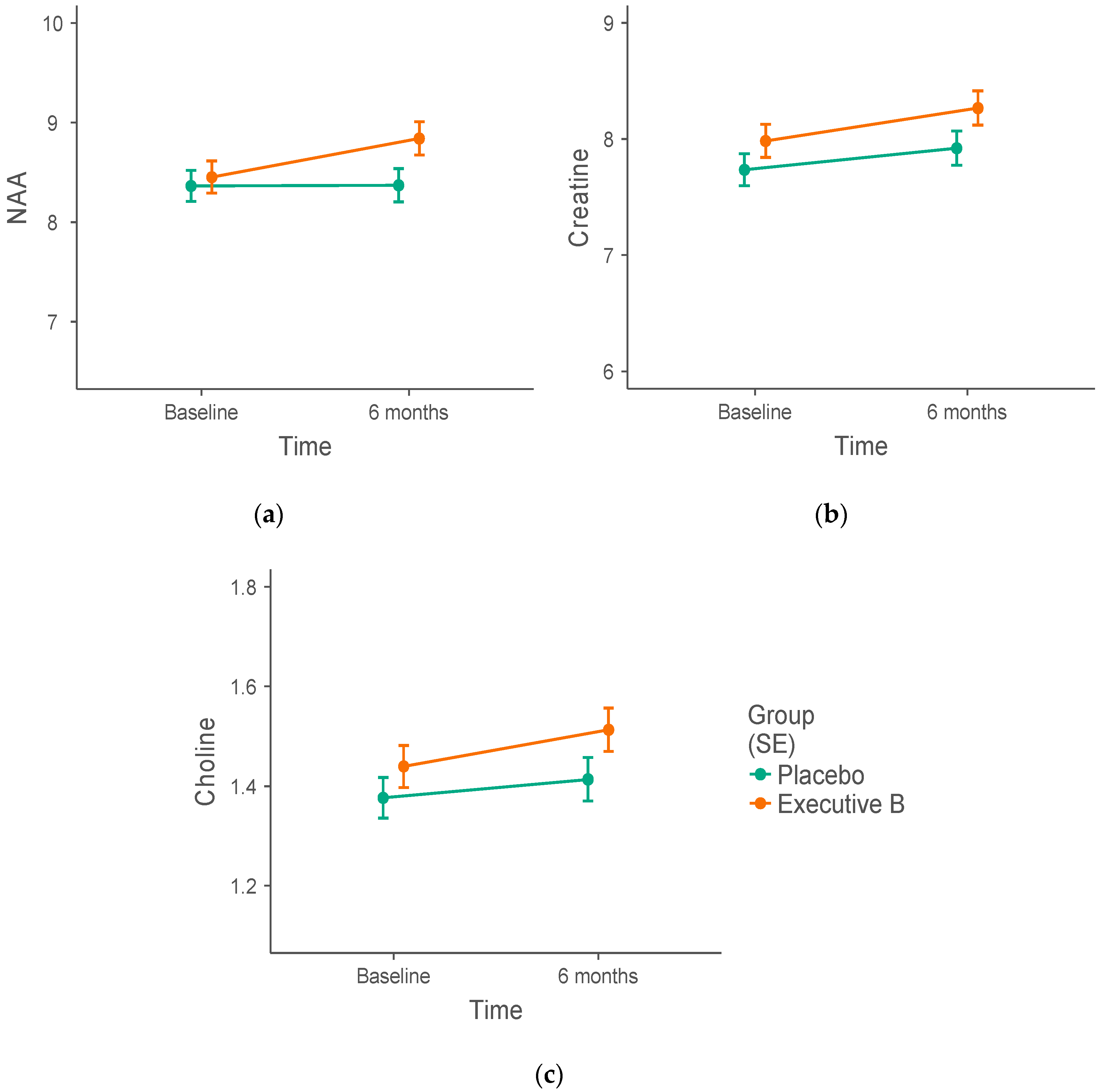