Adherence to the Mediterranean Diet Is Related to Healthy Habits, Learning Processes, and Academic Achievement in Adolescents: A Cross-Sectional Study

Ginger is a plant whose rhizome is used as a spice or folk medicine. We aimed to investigate the effect of ginger root extract on obesity and inflammation in rats fed a high-fat diet. Sprague-Dawley rats were divided into three groups and fed either a 45% high-fat diet (HF), HF + hot-water extract of ginger (WEG; 8 g/kg diet), or HF + high-hydrostatic pressure extract of ginger (HPG; 8 g/kg diet) for 10 weeks. The HPG group had lower body weight and white adipose tissue (WAT) mass compared to the HF group. Serum and hepatic lipid levels of HPG group were lower, while fecal lipid excretion of the HPG group was higher than that of the HF group. In the WAT of the WEG and HPG groups, mRNA levels of adipogenic genes were lower than those of the HF group. Moreover, HPG group had lower mRNA levels of pro-inflammatory cytokines than did the HF group. MicroRNA (miR)-21 expression was down-regulated by both WEG and HPG. Additionally, miR-132 expression was down-regulated by HPG. The adenosine monophosphate-activated protein kinase (AMPK) activity of HPG group was greater than that of the HF group. HPG may have beneficial effects on obesity and inflammation, partially mediated by regulation of miR-21/132 expression and AMPK activation in WAT.
Keywords: ginger extract; obesity; inflammation; microRNA-21; microRNA-132; AMPK ginger extract; obesity; inflammation; microRNA-21; microRNA-132; AMPK

Obesity refers to excessive body fat accumulation. It induces systemic low-grade inflammation, which increases the risk of type 2 diabetes, hypertension, cardiovascular diseases, and certain cancers. Obesity-induced inflammation occurs because of the continuous lipid accumulation in adipose tissue [1]. Pro-inflammatory molecules produced by adipose tissue are active participants in the development of insulin resistance and increase the risk of metabolic disease associated with obesity [1]. To address these issues, many studies have been conducted to inhibit lipid accumulation and pro-inflammatory cytokine synthesis using food materials. Typical functional food components such as curcumin, quercetin, resveratrol, Camellia sinensis, and green tea were found to alleviate lipid accumulation and inflammation induced by metabolic diseases such as obesity and hypertension [2,3,4].
Ginger (Zingiber officinale Roscoe) is a herbaceous plant widely cultivated as a spice or for natural food therapy. In traditional medicine, ginger has been used for diseases such as indigestion, vomiting, joints and muscle pain, and cold [5]. Moreover, its various pharmacological effects have been reported, including anti-obesity, anti-inflammatory, and anticancer effects [6]. The currently known ginger extraction methods are hot water extract, ultra-sonication assisted extract and more [7]. While the heating method has a high possibility of losing functional compounds in food, the high-hydrostatic pressure (HHP) method, a non-thermal food processing technology, extracts functional compounds with higher ease without damaging them by destroying their covalent bonds and cell membrane structures [8].
In this study, we examined the effect of high-hydrostatic pressure extract of ginger (HPG) on high-fat (HF) diet-induced obesity and inflammation, and measured the expression levels of genes involved in adipogenesis and pro-inflammatory cytokines in white adipose tissue (WAT). In addition, we evaluated the microRNA (miR)-21 and miR-132 expression, as well as adenosine monophosphate-activated protein kinase (AMPK) activity in WAT.

HPG and hot water extract of ginger (WEG) were kindly supplied by Korea Food Research Institute (Songnam, Gyeonggi, Korea). The WEG was used as a reference. The ginger root used in the preparation of HPG and WEG was purchased from the local market of Muan (Muan-gun, Jeollanam-do, Korea). Fresh ginger root was added in distilled water, followed by pulverization with a waring blender. The ginger root suspension was used for the preparation of HPG and WEG. The preparation of HPG and WEG were in accordance with the method by Jung et al. [9]. Briefly, the ginger root suspension was poured into plastic bags with 25 mL of each enzyme (Thermamyl 120 L, Celluclast 1.5 L andViscozyme L; Novo Nordisk, Bagsvaerd, Denmark) and transferred to a programmable high-pressure treatment apparatus (TFS-10 L; Innoway Co., Bucheon, Korea) set at a pressure of 100 MPa for 24 h at 50 °C. After incubation, the extract was heated at 100 °C for 10 min to inactivate the enzymes. After cooling, the extract was centrifuged at 11,000× g for 10 min. The supernatant was filtered using No. 4 filter paper and the filtrate was freeze-dried and used as HPG. The WEG was prepared as follows [9]: Ginger root suspension was placed into a round-bottom flask fitted with a cooling condenser, and extraction was performed at 100 °C for 3 h. The extract was followed by centrifugation at 11,000× g for 10 min, and the supernatant was filtered using No. 4 filter paper. The filtrate was freeze-dried and used as WEG.

The 6-gingerol and 6-shogaol were analyzed by high-performance liquid chromatography (HPLC) using a JASCO HPLC system (Tokyo, Japan), according to a method by Moon et al. [10]. Standard 6-gingerol and 6-shogaol were purchased from Sigma-Aldrich (St. Louis, MO, USA).
Total saponin content of each extract was determined using the method described by Moon et al. [10]. The ginsenoside Re (Wako Chem. Co., Osaka, Japan) was used as a reference standard.

All experimental procedures were approved by the Institutional Animal Care and Use Committee (IACUC) of Ewha Womans University, Korea (IACUC No. 15-002). Twenty-seven Sprague–Dawley (male, 3-week-old) rats were housed individually in stainless steel wire mesh cages under controlled environment with a temperature of 22 ± 2 °C, humidity of 55 ± 5%, and a 12-h light and dark cycle. After a week of adaptation, the animals were randomly divided into three groups (n = 9/group) and fed the following experimental diet for 10 weeks: a high-fat diet (HF), high-fat diet containing WEG (8 g/kg diet), and high-fat diet containing HPG (8 g/kg diet). The diet compositions are shown in supplementary Table S1. During the experimental period, body weight and food intake were measured twice a week using a digital scale. Average daily intake was determined by dividing total food intake by the number of days fed. After fasting for 12 h, the rats were anesthetized with a mixture of Zoletil 50 (Virbac Laboratories, Carros, France) and Rompun (Bayer Korea, Seoul, Korea), and euthanized. Blood was collected by cardiac puncture and serum was separated by centrifugation. The collected serum, liver and epididymal adipose tissue were stored at −70 °C until analysis.

Hepatic and fecal lipids were extracted using the method of Bligh and Dyer [12] with slight modifications. Levels of TG and TC in the liver and feces were analyzed by the enzymatic colorimetric method described for serum lipid analysis.

Epididymal adipose tissue was fixed in 10% formalin solution overnight. The fixed tissue was processed using an automatic tissue processor (TP1020, Leica, Mannheim, Germany). The processed tissues were infiltrated with paraffin (Paraplast Plus, Leica), cut into 7-μm-thick sections, and then stained with hematoxylin and eosin (H&E). Image of H&E sections were obtained using a microscope (Olympus, Tokyo, Japan) at 200× magnification. To determine adipocyte size, H&E staining images were analyzed using Image J software. Thirty cells per sample were included in the analysis for each group.

Data are expressed as mean ± standard error of the mean (SEM). The SPSS software (version 22; IBM Corporation, Armonk, NY, USA) was used for the statistical analyses. Data were tested for normal distribution by the Kolmogorov–Smirnov normality test. Then the comparisons between groups were made by one-way analysis of variance (ANOVA) and Tukey’s post hoc multiple comparison tests. p-values less than 0.05 were considered statistically significant.

3.1. Contents of 6-Gingerol, 6-Shogaol and Total Saponin of Ginger Extracts

3.5. mRNA Expression of Genes Related to Adipogenesis and Pro-Inflammatory Cytokines in WAT

The mRNA expression of genes related to adipogenesis and pro-inflammatory cytokines in WAT were analyzed. The mRNA levels of peroxisome proliferator-activated receptor-γ (PPAR-γ) and adipocyte protein 2 (aP2) were lower in both the WEG and HPG groups than those in the HF group (p < 0.05) (Figure 5a). The mRNA levels of tumor necrosis factor-α (TNF-α), interleukin-6 (IL-6), and monocyte chemoattractant protein-1 (MCP-1) were lower in the HPG group than in the HF group (p < 0.05), whereas WEG treatment did not affect these levels significantly (Figure 5b).

We determined the activity of AMPK, an important metabolic regulator, which affects the regulation of genes related to adipogenesis and inflammation in WAT. The AMPK activity was significantly enhanced by 1.8-fold in the HPG group compared to the HF group (p < 0.05) (Figure 7).

Our findings suggest that HPG inhibits body weight gain and adipose tissue in rats fed the HF diet. Additionally, HPG reduces lipid levels in serum and liver, promotes lipid excretion through feces, and causes down-regulation in the mRNA expression of genes related to adipogenesis and pro-inflammatory cytokines. Therefore, we concluded that HPG would be useful for application as a functional food for the prevention of obesity and inflammation. Specifically, this study has first reported that HPG inhibits miR-21/132 expression and activates AMPK in adipose tissue. Thus, further studies are needed to investigate the target-signaling pathways due to miR-21/132 down-regulation and AMPK activation by HPG. 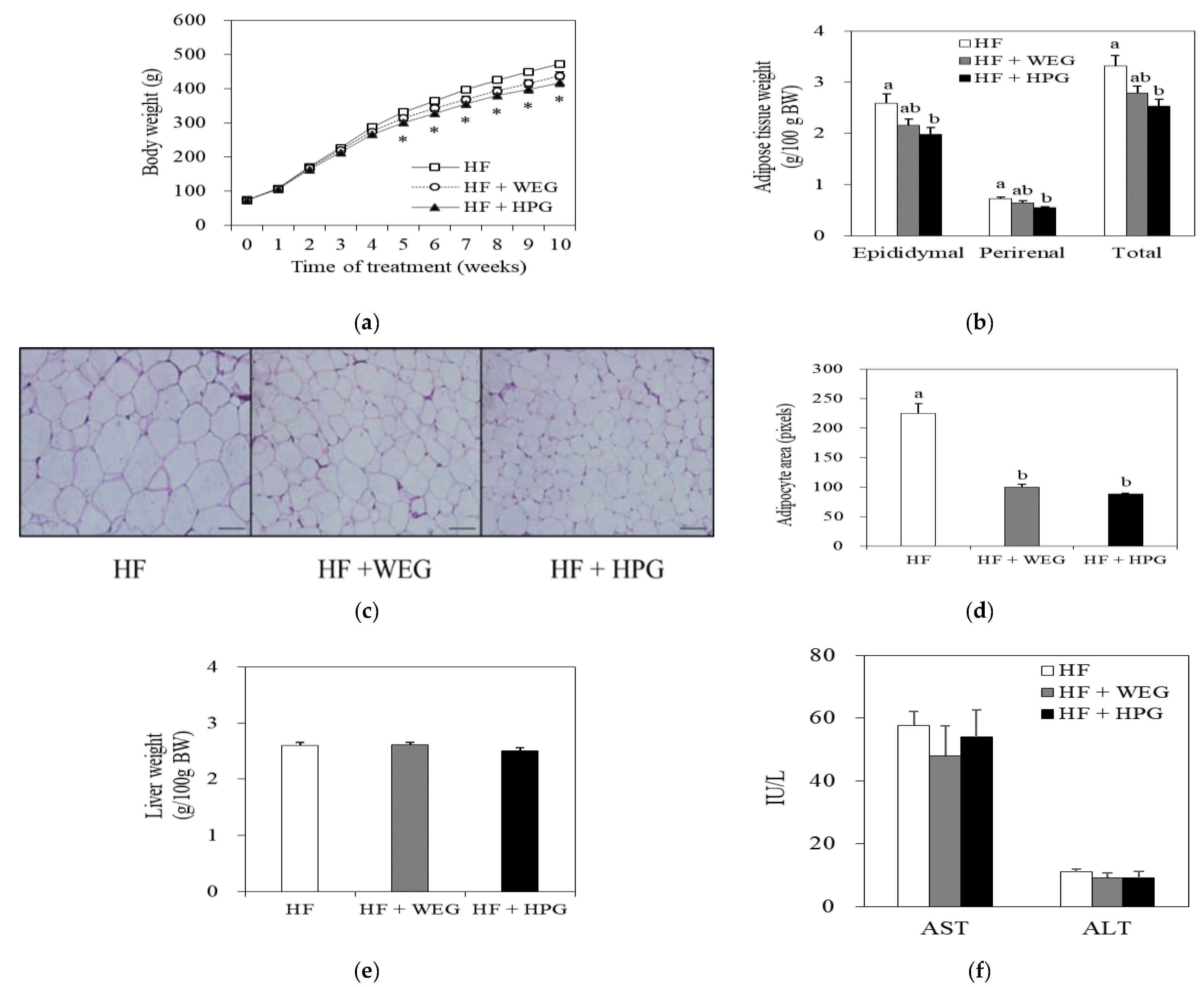 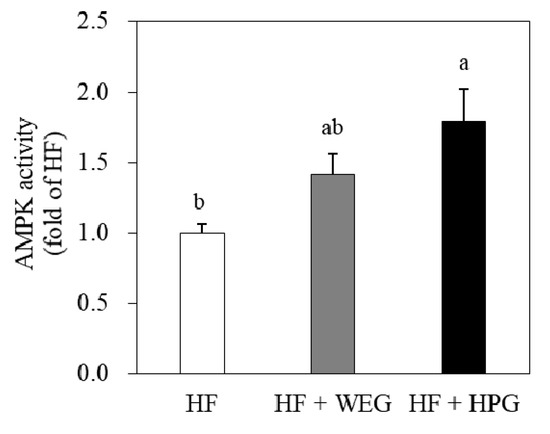 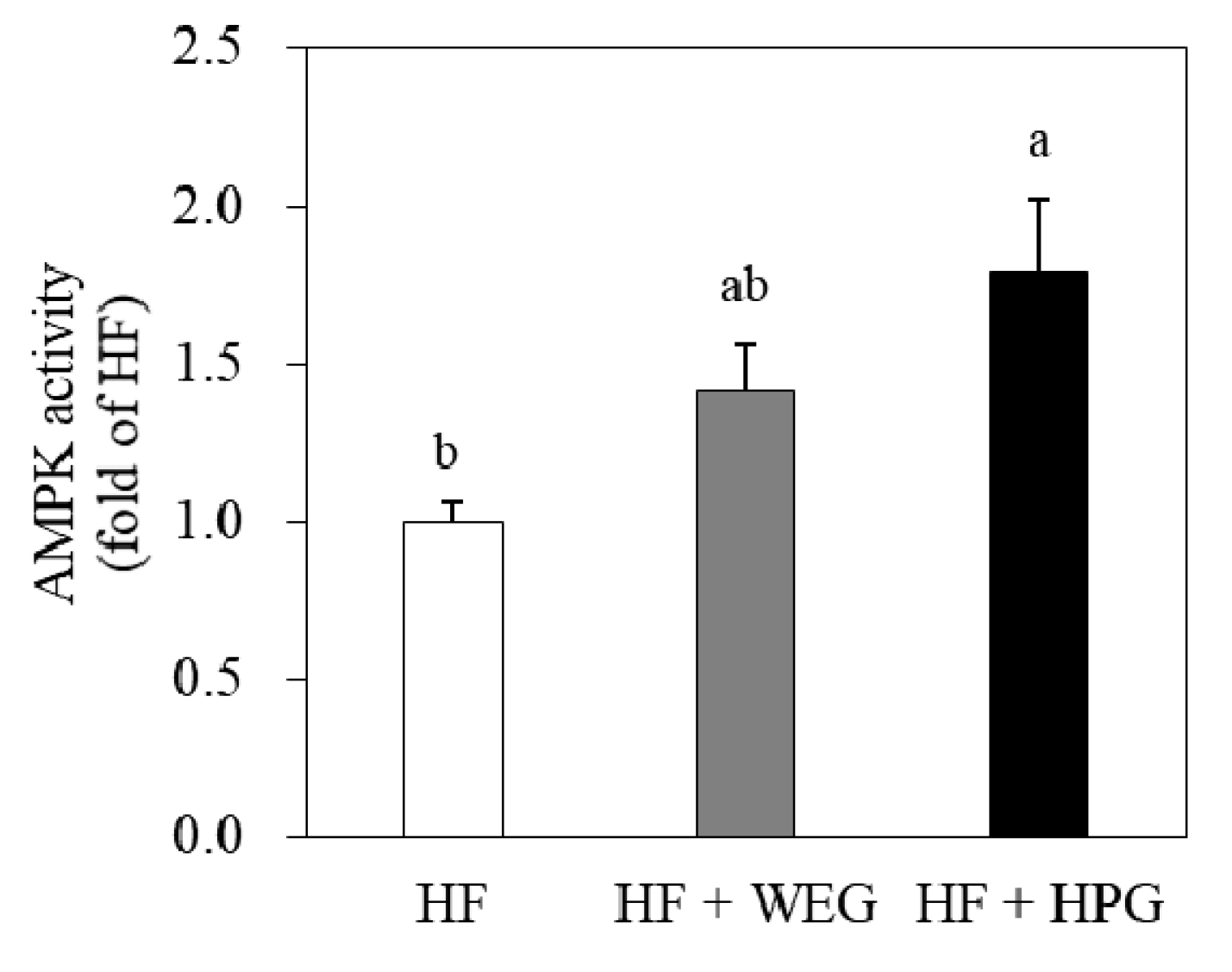 Table 1. Effects of WEG and HPG on physiological variables.
Table 1. Effects of WEG and HPG on physiological variables.
Values are expressed as mean ± SEM (n = 9/group). a,b Mean values with unlike superscript letters are statistically different at p < 0.05. HF: high fat; WEG: hot water extract of ginger; HPG: high-hydrostatic pressure extract of ginger.
© 2018 by the authors. Licensee MDPI, Basel, Switzerland. This article is an open access article distributed under the terms and conditions of the Creative Commons Attribution (CC BY) license (http://creativecommons.org/licenses/by/4.0/).
We use cookies on our website to ensure you get the best experience. Read more about our cookies here.
Accept
We have just recently launched a new version of our website. Help us to further improve by taking part in this short 5 minute survey here. here.
Never show this again