Cognitive deficits with memory losses and lack of recognition are typical signs of Alzheimer’s disease (AD), which subsequently brings about a behavioral change in afflicted individuals. It is well established that accumulation of the amyloid beta (Aβ) peptide in the brain is an immediate cause of synaptic dysfunction and neuronal cell death in AD. Nonetheless, oxidative stress and inflammation are recognized as important causative factors as well [1]. Aβ peptides play an important role in the neuroinflammatory responses mediated through reactive oxygen species (ROS) generation. In the pathogenesis of AD, the amyloid-cascade hypothesis and the oxidative-stress hypothesis are considered as one concept by many authors [1].
Behavioral task tests are among the tools used to evaluate cognitive deficits in the mouse model of AD [2,3], with the T-maze, novel object recognition, and Morris water maze tests being the most widely applied. Specifically, the novel object recognition test [4] and the T-maze test [5] are designed to evaluate cognitive ability through observation of the subject’s exploratory behaviors toward a new object or route, respectively. The Morris water maze task test is designed to evaluate learning and memory levels, using a swimming pool with a hidden platform [6].
Natural products rich in polyphenols with multiple functions, in particular antioxidative activity, might potentially hinder neurodegeneration and thereby improve memory and cognitive functions through the alleviation of Aβ-induced neurotoxicity [7]. Numerous studies have shown the preventive or curable functions of natural products and bioactive compounds against AD, such as the anti-amyloidogenic activities of resveratrol, gingerols, curcumin, and gallate in models of the disease [8]. Quercetin has also been reported for its neuroprotective effects mediated through the attenuation of oxidative stress [9] and inflammation [10] and reduction of proteins related to AD [10].
Kimchi, a Korean traditional fermented vegetable, contains numerous bioactive compounds because it is prepared with cabbage, red pepper, garlic, ginger, green onion, and fermented fish sauce. Consequently, kimchi has demonstrated various health-beneficial effects, including the prevention of oxidative stress [11], inflammation [12], and cancer [13], and improvement of cognitive abilities [3]. These effects of kimchi might be attributed to the antioxidative activity of its component bioactive compounds [14]. In our previous study, several bioactive compounds were identified from the kimchi methanol extract (KME); namely, ascorbic acid, capsaicin, 3-(4′-hydroxyl-3′,5′-dimethoxyphenyl)propionic acid (HDMPPA), and quercetin, at 280, 270, 40, and 20 mg/kg-KME, respectively [15]. Capsaicin, ascorbic acid, and HDMPPA are monophenol compounds, whereas quercetin is a polyphenol compound. In this study, the neuroprotective effects of KME and its bioactive compounds were investigated in a mouse model of Aβ25-35-induced AD. Behavioral task tests were performed in addition to biochemical evaluation of the protein expression of antioxidants and inflammatory cytokines in the treated animals.

2.2. Animals and Intracerebroventricular Injection of Aβ25-35

ICR mice (male, 5 weeks old) were purchased from Orient, Inc. (Seongnam, Korea). The mice were kept under a controlled temperature (23 ± 1 °C) and humidity (50 ± 5%) with a 12 h light-dark cycle, and fed chow diet and water ad libitum. After 1 week of acclimatization, the animals were assigned to seven groups (n = 7 per group) on the basis of body weight (bw). Aβ25-35 (Sigma-Aldrich) dissolved in phosphate-buffered saline (PBS) was incubated at 37 °C for 3 days. On day 0, the mice in the experimental groups were given an intracerebroventricular injection of aggregated Aβ25-35, except for the animals in the normal (NOR) group, which were injected with PBS instead. In brief, a 5 μL Aβ25-35 solution (5 nmol/mouse) or PBS was injected into the bregma (2.2 mm depth) of each mouse, using a 10 μL Hamilton microsyringe equipped with a 26-gauge needle [1,16]. Then, from day 5 onward, capsaicin (at 10 mg/kg bw/day), HDMPPA, quercetin, ascorbic acid (at 50 mg/kg bw/day each), or KME (at 200 mg/kg bw/day), each dissolved in carboxymethylcellulose, was orally administered to the mice for 2 weeks. The NOR group and an Aβ25-35-injected control (CON) group received the carboxymethylcellulose vehicle only. The treatment dosage was determined according to previous studies [10,17,18], where the dosage of capsaicin was further adjusted since the compound demonstrated toxicity at a high dose [19]. The dosage of KME was based on that used in previous studies at which it exhibited positive effects in the mouse model [2,15]. From day 14, three different behavioral tests were performed for 8 days according to previous studies [1,2,20]; that is, 4 consecutive days for the Morris water maze test, 2 days for the novel object recognition test, and another 2 days for the T-maze test. On day 19, all mice were fasted for 12 h and then sacrificed after CO2 anesthetization. The experimental schedule for the animal study is shown in Figure 1. The organs were perfused with ice-cold PBS and excised. The animal protocols were reviewed and approved by the Institutional Animal Care and Use Committee of Pusan National University (Approval No. PNU-2016-1385).

Memory function was examined with a slightly modified Morris water maze test [6]. The circular pool used for the test was 100 cm in diameter and 35 cm in height. During the experiment, the water temperature was maintained at 22 ± 1 °C. For the behavioral test, the water pool was divided into quadrants. A platform (8 cm in diameter) was placed 1 cm underneath the water at one designated quadrant, and visual signs were marked on the other quadrants for spatial navigation. White paint (water-soluble, nontoxic) was added to make the water opaque. A total of 12 trials were conducted, three times a day. The time taken to search for the hidden platform was recorded up to 60 s. After each performance, the mouse was allowed to rest on the platform for 15 s to remember the comfort of the environment regardless of mission completion. On day 4, the 10th trial was performed as usual, using a hidden platform. However, the 11th trial was carried out without the platform. The times taken for staying to find the target quadrant were measured, respectively. For the final (12th) trial, the performance test was carried out in clear water to investigate whether the latency time would be different under the more visible environment.

Recognition of a new object was tested using a black-colored cage (40 × 40 × 40 cm) [4]. For the 1st trial, two identical objects (A, A’) were placed in the box, and the frequency of touching each object was recorded for 10 min, separately. In the 2nd test conducted after 24 h, one of the old objects used in the 1st trial was replaced with a new object (A, B). Novel object recognition was calculated as the ratio of the number of times touching the familiar object or new object to the sum of the touching frequencies.

Memory function was examined using a T-maze test [5]. The T-shaped black box had two routes (the left and right arms, respectively) and a starting position at the front pouch. The left-hand-side door was designed to be open all the time, and the right-hand-side door was closed in the 1st test but opened in the 2nd test. The frequencies of touching the gate for exploring each route were recorded for 10 min. The time lap between the two trials was 24 h.

Brain homogenates were prepared in PBS (1:9, w/v). The thiobarbituric acid reactive substances (TBARS) levels in the homogenates were determined using a malondialdehyde standard curve, and the glutathione (GSH) levels were measured using a GSH standard curve [15].
A post-mitochondrial fraction was obtained by centrifugation of the brain homogenate, and the ROS and peroxynitrite levels were determined in this fraction using 2′,7′-dichlorofluorescein diacetate [21] and dihydrorhodamine 123 buffer [22], respectively. Changes in the fluorescence of the reaction samples were measured at 480 and 535 nm for 30 min with a fluorescence plate reader (FLUOstar OPTIMA; BMG LABTECH, Ortenberg, Germany).

Values are presented as the mean ± standard deviation. Significant differences between the CON group and each experimental group were assessed by one-way analysis of variance followed by Dunnett’s multiple-comparison test, using SPSS version 22.0 software (SPSS Inc., Chicago, IL, USA). Student’s t-test was also applied to the data from the object recognition task test and T-maze task test. A value of p < 0.05 was considered statistically significant.

Body weight changes among the Aβ25-35-injected groups were not significantly different. The time taken by the experimental groups to reach the hidden platform decreased considerably with increased training time, compared with that taken by the CON group (Figure 2A). The latency time to the platform was the longest for the CON group, followed by the capsaicin, ascorbic acid, HDMPPA, quercetin, KME, and NOR groups, in order. The occupancy time in the target quadrant where the platform was originally placed was longer for the experimental groups than for the CON group, but significant difference was found only with the quercetin and KME groups (p < 0.05, Figure 2B). However, there were no significant differences in the latency to reach the exposed platform among the experimental groups indicating that the improvement of memory function is not associated with the visual ability (Figure 2C).

The Aβ25-35-injected CON group exhibited a poor ability to recognize the new object (Figure 3). Compared with that observed in the CON group, cognitive function with respect to the frequency of touching the novel object was significantly increased in the KME group, followed by the quercetin, HDMPPA, and ascorbic acid groups, in order (p < 0.05). The effect of KME, quercetin, HDMPPA, and ascorbic acid groups were higher by 119.5% (p < 0.01), 116.9% (p < 0.01), 114.2% (p < 0.05), and 114.2% (p < 0.05), compared with that of CON group. The CON and capsaicin groups showed no differences in recognition of the different objects.

The KME group demonstrated the highest frequencies of entering a new gate to find the maze, followed by the HDMPPA, quercetin, ascorbic acid, and capsaicin groups. In particular, the KME and quercetin groups showed significantly greater spatial cognition than did the CON group (p < 0.05, Figure 4).

3.4. Inhibition of Oxidative Stress in the Brain Tissue

The concentrations of ROS, peroxynitrite, and TBARS in the brain tissue of the CON mice were significantly higher than those of the NOR mice, whereas the GSH level was lower (p < 0.05, Table 1). Compared with their levels in the CON group, the ROS and peroxynitrite levels in the quercetin group were 42.7% and 52.3% lower, respectively (p < 0.05). The TBARS level of the KME group was the lowest, followed by that of the quercetin and HDMPPA groups, of which the concentration was decreased by 34.6%, 23.0%, and 22.8%, respectively, relative to the CON group level. In contrast, the GSH level was significantly increased in the KME and quercetin groups, by 104.2% and 103.7%, respectively (p < 0.05), relative to the level in the CON group.

3.5. Elevation of the Antioxidative Status in the Brain Tissue

3.6. Suppression of the Inflammatory Response in the Brain Tissue

This research was supported by the Basic Science Research Program through the National Research Foundation of Korea (NRF), funded by the Ministry of Education (2015R1D1A1A01057267). 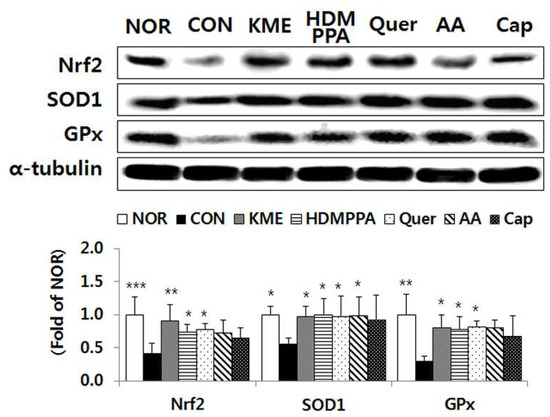 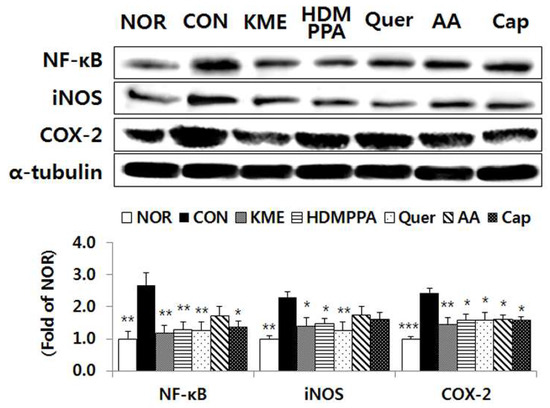 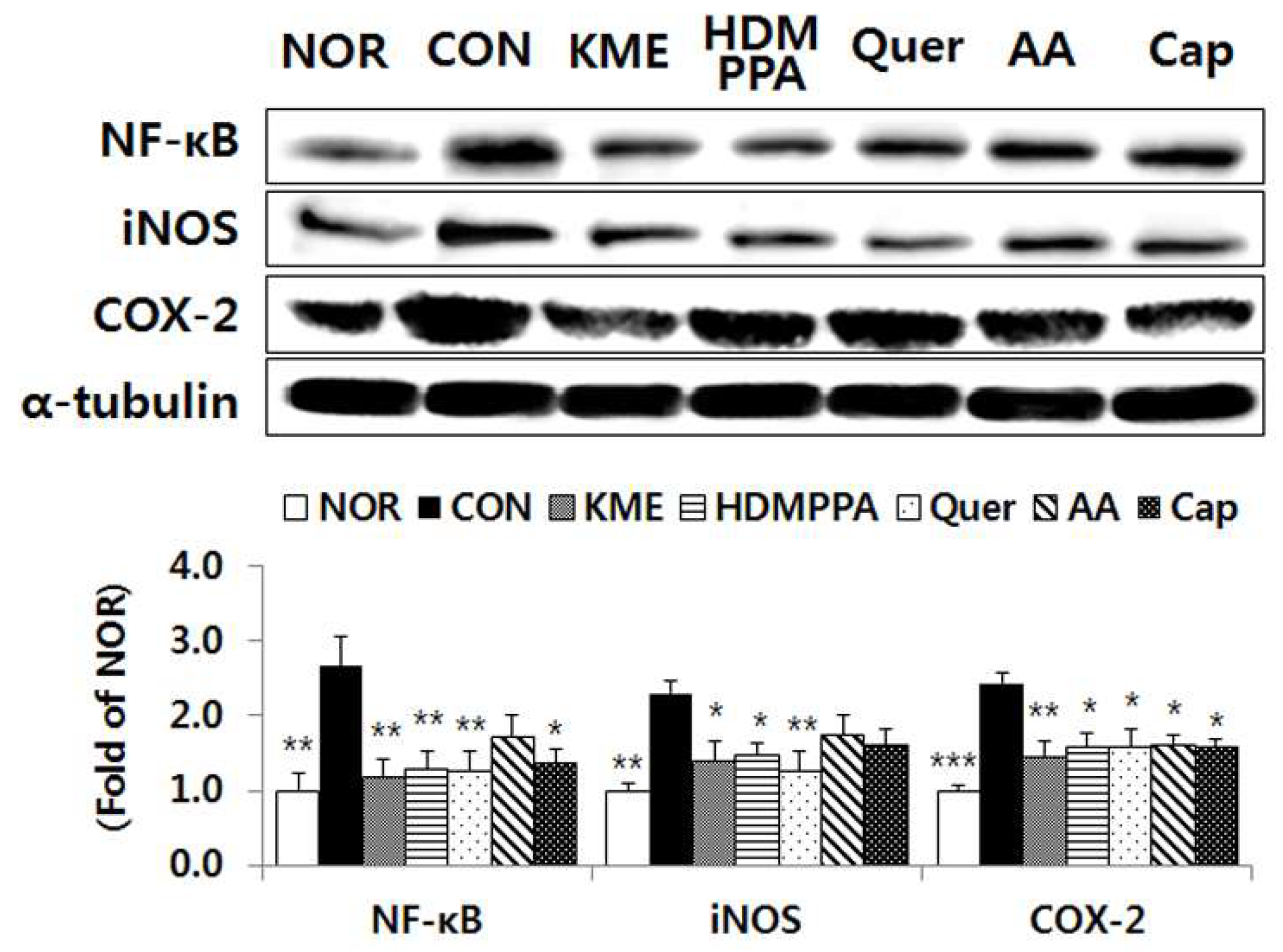