Ten healthy young men (age 25 ± 1 years, weight 66 ± 2 kg, height 1. 73 ± 0. 02 m) were enrolled. During the study period, including the washout period, when the tests under the four conditions were conducted, participants were instructed to refrain from participating in strenuous exercise, maintain normal levels of daily physical activity and eat normal meals daily.
The purpose of the study, measurement items and details of the tests were communicated in advance to the participants both verbally and in written form and those who provided written informed consent were considered for study participation. Prior to the performance of the tests, we confirmed that the participants had no chronic health problems using a questionnaire. The study was approved by the Ethics Committee at Ritsumeikan University (approval number BKC-IRB-2015-032) and was conducted in accordance with the Declaration of Helsinki.

The test meal consumed on the testing day was of Japanese style. The meals were prepared on the day of the test and contained egg, fish and milk for protein, along with other ingredients such as rice and vegetables (Figure 2). The menu comprised grilled salmon, omelet, tuna salad, miso soup, boiled rice and café latte. The meal contained 499 kcal of energy, 27.5 g of protein (including 2.15 g of leucine), 14.1 g of lipids and 65.5 g of carbohydrates and the PFC ratio was 22:25:53. The analysis of the nutritional composition and amount of amino acids such as leucine in the test meal was entrusted to Japan Food Research Laboratories, Tokyo, Japan (Table 1).

All values are presented as means ± standard error (SE). A previous study proposed two formulae for the calculation of the area under the curve (AUC): AUC with respect to increase (AUCi) and AUC with respect to ground (AUCg) [20]. In the AUCi, the plasma concentrations in the fasting state and at rest are taken as 0 and the AUC is set as the calculated amount of change in the plasma concentration after the elapsed time. In the AUCg, without setting the plasma concentration in the fasting state and at rest as 0, the AUC includes the area from 0 µM up to the actual concentration. As this study focuses on the amount of change from the state of rest to a point after intake, the AUCi is used. Two separate comparisons were performed for AUCi calculations and statistical analysis. In respect with conditions for total of 2 g leucine intake, LEU and MEAL were compared up to 240 min to reflect the acute meal ingestion. Since 20 min was given for meal ingestion, total length of time for AUCi calculation was 260 min for MEAL (−20 min to 240 min) whereas it was 240 min for LEU (0 min to 240 min). Furthermore, MEAL-LEU and MEAL-LEU180 was compared as conditions for total of 4 g leucine intake. Total length of time for AUCi calculation of MEAL-LEU and MEAL-LEU180 was 440 min (−20 min to 420 min). In the comparison of the four conditions, the presence or absence of a simple main effect was studied using one-way analysis of variance (ANOVA). Afterwards, for cases in which a simple main effect was observed to be significant, the points displaying significant differences were identified using Tukey’s post hoc test. Differences between AUCi values were assessed by a paired t-test. In all the cases, a significance level of 5% was used for two-sided tests. SPSS version 19 (SPSS Inc., Chicago, IL, USA) was used for the analysis.

Blood glucose concentration changes over time is shown in Figure 4. Between the different conditions, there were no significant differences in the blood glucose concentrations in the fasting state (91 ± 2, 95 ± 2, 94 ± 3, 93 ± 2 mg/dL for LEU, MEAL, MEAL-LEU, MEAL-LEU180, respectively; p > 0.1). The Cmax for LEU was 94 ± 2 mg/dL and was lower (p < 0.05) than that for all the other conditions with mixed meal intake (Table 3). For all the conditions, no differences were observed in the Tmax.

Plasma leucine concentration changes over time is shown in Figure 6. Between the different conditions, there was no significant difference in the concentration of leucine in the fasting state (137 ± 4, 140 ± 4, 142 ± 4, 143 ± 4 µM for LEU, MEAL, MEAL-LEU, MEAL-LEU180, respectively; p > 0.1). The Cmax values for MEAL and MEAL-LEU were lower (p < 0.05) than those for LEU (Table 5). There was no significant difference between the concentrations for LEU and MEAL-LEU180. The Tmax to reach Cmax for LEU was shorter (p < 0.05) than that for MEAL and MEAL-LEU.

3.5. Area under the Curve with Respect to Increase (AUCi) for Plasma Essential Amino Acids and Leucine

We would like to thank all of the subjects who participated in the study. We thank the laboratory members for help the excellent technical support during the experiment. 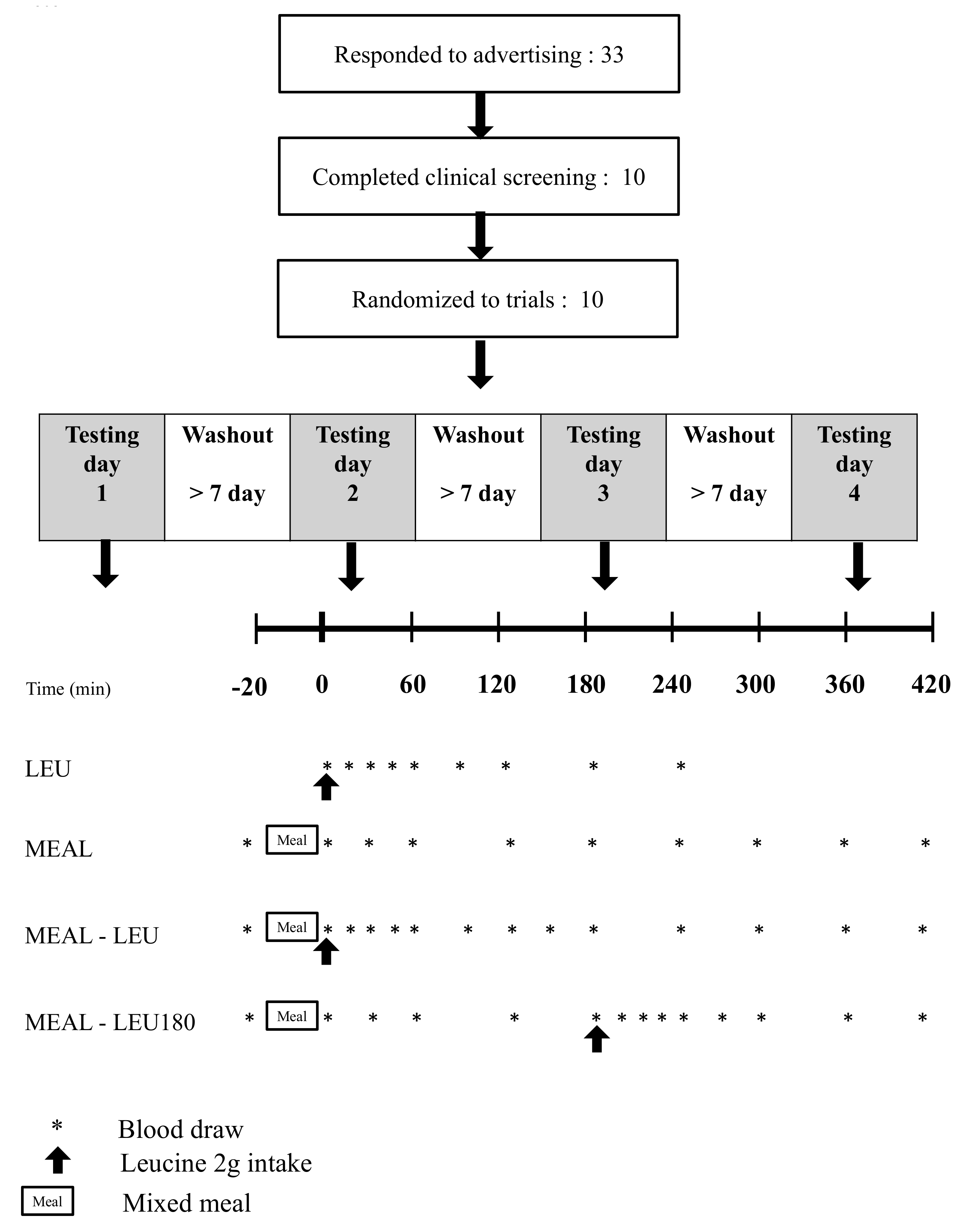 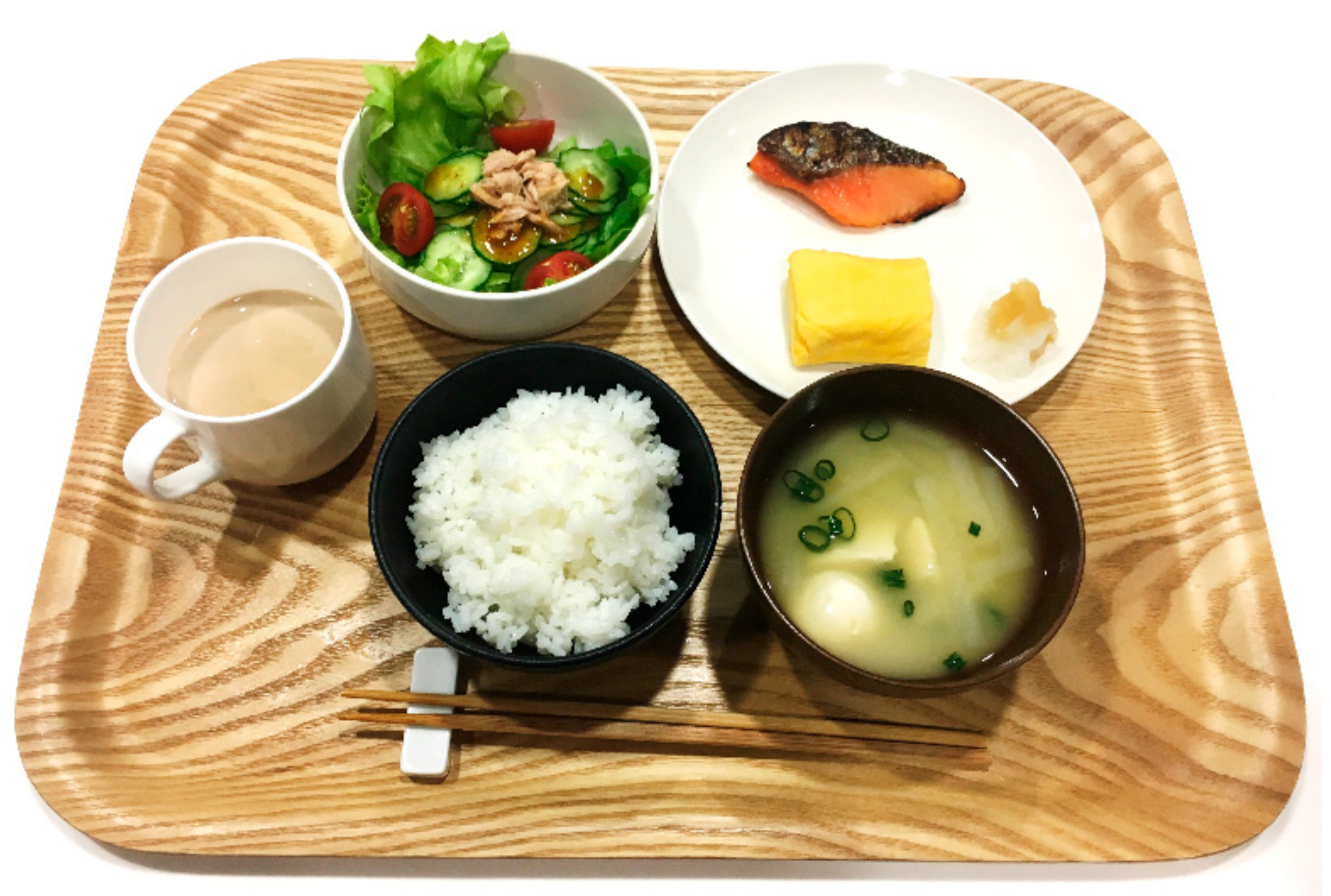 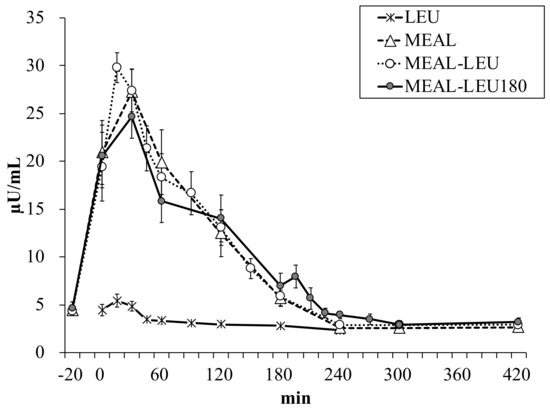 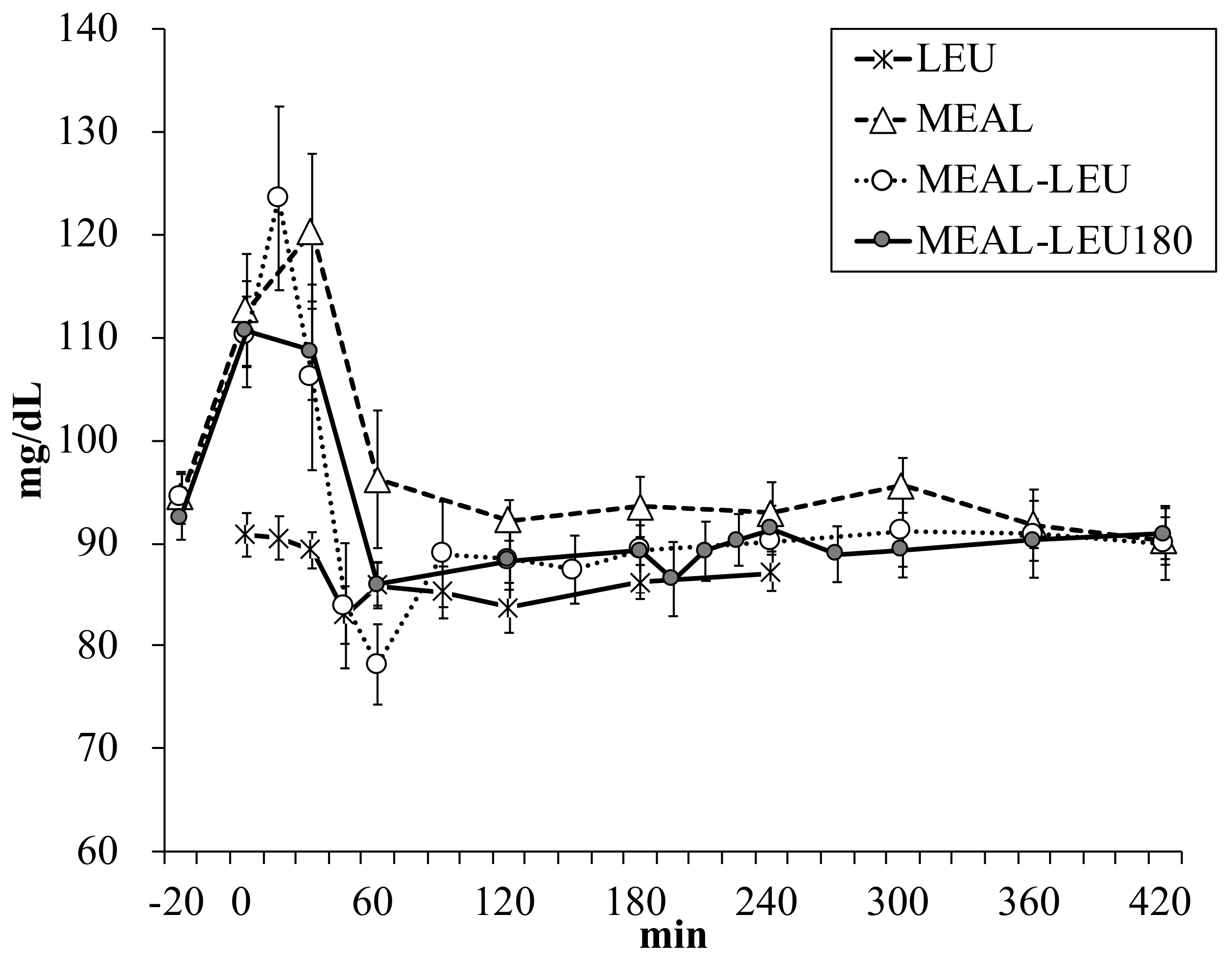 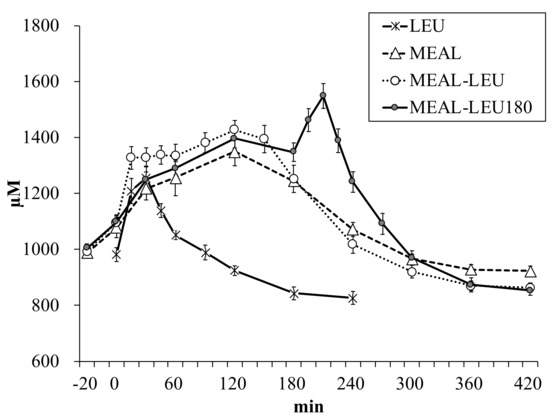