Effectiveness of a Program Intervention with Reduced-Iron Multiple Micronutrient Powders on Iron Status, Morbidity and Growth in Young Children in Ethiopia
Previous Article in Special Issue

Wholegrain Intake and Risk of Type 2 Diabetes: Evidence from Epidemiological and Intervention Studies

The Glucose-Lowering Effect of Foxtail Millet in Subjects with Impaired Glucose Tolerance: A Self-Controlled Clinical Trial

Diabetes, one of the largest epidemics the world has faced, is a major risk factor for public health. Over the past few decades, both the prevalence of diabetes and the number of diabetics has increased dramatically, due to rapid socioeconomic development and lifestyle changes. A national study from 2007 to 2008 estimated that about 9.7% of the general adult population has been suffering from diabetes, and 15.5% has been suffering from pre-diabetes [1].
Impaired glucose tolerance (IGT) is an intermediate condition in the transition between normality and diabetes. People with IGT are at high risk of progressing to type 2 diabetes (T2DM). The average annual progression rates ranged from 6.0% to 15.7% and the cumulative incidence of diabetes at 6 years reached to 67.7% [2,3]. An unhealthy diet and lack of exercise were associated with a significantly increased risk of diabetes [4,5]. On the contrary, the majority of cases of T2DM could be delayed or prevented by the adoption of a healthy lifestyle, such as sufficient consumption of whole grains, controlled total energy intake, and increased physical activity, resulting in 31–58% of the reduction risk of diabetes [2,3].
Among the established risk factors of T2DM, balanced diet and rational nutrition play an important role [6]. In the past, numerous studies have enhanced our understanding of the relationship between whole grain and glucose metabolism [7]. Prospective studies consistently showed a reduced risk of T2DM with high intakes of whole grains [8]. Fung et al. followed the men from the Health Professionals Follow-up Study without a history of diabetes or cardiovascular disease (n = 42898) for ≤12 years and suggested that a diet high in whole grains was associated with a reduced risk of T2DM [9].
Millet is one of the most important drought-resistant whole grain in arid and semiarid areas of Asia and Africa [10]. It has been receiving specific attention because of its excellent nutritive value and potential health benefits such as anti-tumor, anti-oxidant and anti-arteriosclerotic effects [11]. Moreover, millet-based products have markedly slower gastric emptying than rice, potato, or pasta [12]. Previous research has suggested the anti-diabetic effect of finger millet [13] and barnyard millet [14]. However, there are still no clinical researches regarding the glucose-lowering effect of foxtail millet. Our previous study showed that the in vitro starch digestibility of foxtail millet flour was obviously lower than that of wheat flour [15]. Foxtail millet-derived products had a median glycemic index and a gentle stimulation to pancreatic β-cell, which could help diabetics to avoid dangerous spike in blood glucose [15]. These characteristics above-mentioned might contribute to the improvement of postprandial blood glucose in diabetics. In addition, animal experiment also showed that feeding of foxtail millet improved insulin sensitivity and cholesterol metabolism in genetically type 2 diabetic mice [16]. Human clinical trials are necessary to validate the results obtained from in-vitro studies and animal experiments [17].
Based on this, we hypothesized that increasing the intake of foxtail millet could decrease the blood glucose concentrations and improve the blood glucose tolerance. Considering the fact that it is difficult to find a placebo whose color, flavor, texture and taste were almost the same with foxtail millet diet, evaluation of foxtail millet in a randomized clinical trial was not feasible [18]. Taking this into account, we decided to examine the issue in an open-label, self-controlled clinical trial. Thus, 12 weeks of foxtail millet intervention (50 g/day in raw weight) was conducted in free-living subjects with IGT and the effect of foxtail millet diet on glycemic metabolism, lipid metabolism, inflammation status, and body composition was investigated.

This open-label, self-controlled clinical trial was approved by Ethics Committee of Peking University (IRB00001052-14023). All the subjects were gave written informed consent before participation. The study was performed at the Peking University and registered with Chinese Clinical Trial Registry (No. ChiCTR-OON-16008603). All study performers have completed Good Clinical Practices training and were qualified to conduct clinical research.

The 1999 World Health Organization (WHO) diagnostic criteria were used to screen out appropriate subjects based on the criteria of fasting blood glucose (FBG) concentrations <7.0 mmol/L and 2 h-glucose range from 7.8 to 11.1 mmol/L in 75-g oral glucose tolerance test (OGTT) [19]. Eligible subjects were excluded if they were allergic to plant protein or had abnormal renal/liver function or had suffered from a self-reported chronic disease (non-alcoholic fatty liver disease, cancer, immunological disease, etc.) for 6 years and over or were taking medicines known to alter glucose tolerance. Pregnant and breastfeeding women also couldn’t be recruited. It needs to be noted that short-term chronic patients were still included in the present study. After screening 295 participants, a total of 70 eligible subjects participated in the intervention and 64 subjects (27 male subjects and 37 female subjects) were involved in the final analysis (4 subjects failed to follow up and 2 subjects with missing data on 2 h-glucose were excluded, Figure 1). Among the subjects, 69.4% of them were non-smokers and 71.7% of them were non-drinkers. Their average age was 56.0 ± 7.1 years (65.6% of them were over 60 years old), with average body mass index (BMI) of 26.0 ± 3.5 kg/m2. Among the female subjects, 67.6% had struggled with gestational diabetes mellitus.

Foxtail millet steamed bread was cooked and vacuum packaged uniformly, according to the introduction by Ren et al. [20]. A daily intake of 50–150 g of whole grain was recommended by Dietary Guidelines for Chinese Residents (2016). In the present study, 90 g of foxtail millet steamed bread, containing 50 g foxtail millet in raw weight, was provided to participants every day throughout the 12 weeks of intervention. The administered steamed bread was in addition to their habitual daily diet, and the subjects were encouraged to remain on their normal dietary habit aside from substituting equivalent food by steamed bread. To determine compliance, subjects recorded foxtail millet steamed bread consumed each day using a checklist which was returned to the researchers at week 6 and 12, respectively. The amount of foxtail millet intake (Figure 2A) and overall nutrient supply (Table S1) were assessed using 24-h dietary recall at week 0, 6, and 12 respectively [21]. Moreover, the level of physical activity of IGT subjects has been assessed by International Physical Activity Questionnaire (last 7-day recall) according to the standard method [22]. There were no significant differences in the level of physical activity and all kinds of nutrient supply (Table S1). All the subjects backed to Peking University for samples collection at week 0, 6 and 12, respectively.

According to the baseline data (week 0, Table 1), both the mean blood pressure and mean blood lipid of enrolled subjects had been out of the optimal range and almost reached the high-normal levels, which reminded IGT subjects to pay attention to monitor blood pressure and blood lipid when regulating blood glucose. Although there were no significant changes in TC, TAG, ApoB, and ApoA1/ApoB, the concentrations of HDL-C and ApoA1 were significantly increased at week 6 (both p < 0.05) when compared with the baseline. After 12 weeks of foxtail millet intervention, the average of diastolic blood pressure (DBP) was significantly decreased from 84.9 ± 8.5 mmHg to 81.6 ± 7.8 mmHg (p = 0.003).

3.5. Sex-Dependent Difference in the Glucose-Lowering Effect of Foxtail Millet

The sex-dependent difference in glucose-lowering effect of foxtail millet was analyzed based on three representative indices of glucose metabolism: FBG, 2 h-glucose and HOMA-IR. There were no significant difference in the above 3 indices between male and female subjects at week 0. During the intervention, the average concentrations of FBG (Figure 2B) in female subjects were significantly decreased at week 6 and then maintained at an almost constant low concentrations throughout 12 weeks. However, the average concentration of FBG in male subjects decreased gradually with time of intervention. The statistically significant change of FBG did not appear until week 12. The change of 2 h-glucose (Figure 2C) was similar to that of FBG both in male and female subjects except that there was no significant decrease in male throughout 12 weeks. As to HOMA-IR (Figure 2D), the significant decrease occurred at first 6 weeks (from week 0 to week 6) in female subjects, while it occurred at last 6 weeks (from week 6 to week 12) in male subjects.

In 2016, the WHO published the first “Global report on diabetes”, highlighting the serious situation of diabetes around the world and the necessity of developing effective way to reduce the risk of T2DM. The intake of 50 g of foxtail millet per day significantly improved the glycemic control, especially the postprandial glucose, in free-living subjects with IGT. The glucose-lowering effect of foxtail millet might be a result of the interaction of increased leptin concentrations, decreased insulin resistance and reduced inflammation. Although foxtail millet was investigated in this study, it should not be excluded that other whole grain foods also have similar blood glucose-lowering effect. Thus, it is suggested that modern people should appropriately increase and insist on the intake of whole grains.

This research was funded by the China Agriculture Research System (CARS-06) and National Key R&D Program of China (2017YFD0401200).

We thank the patients with impaired glucose tolerance who participated in the study. 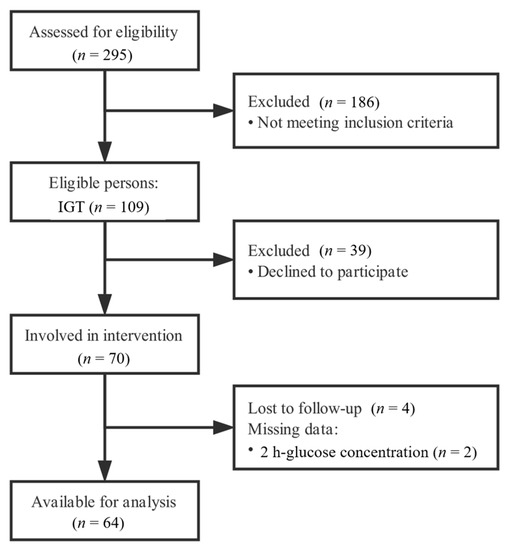 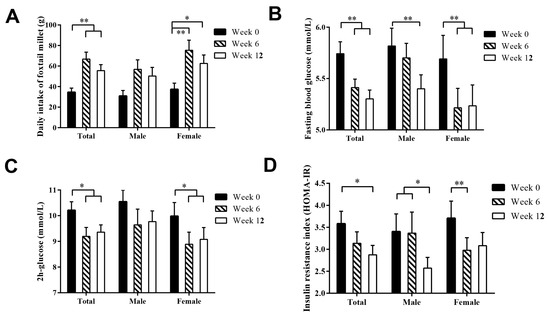 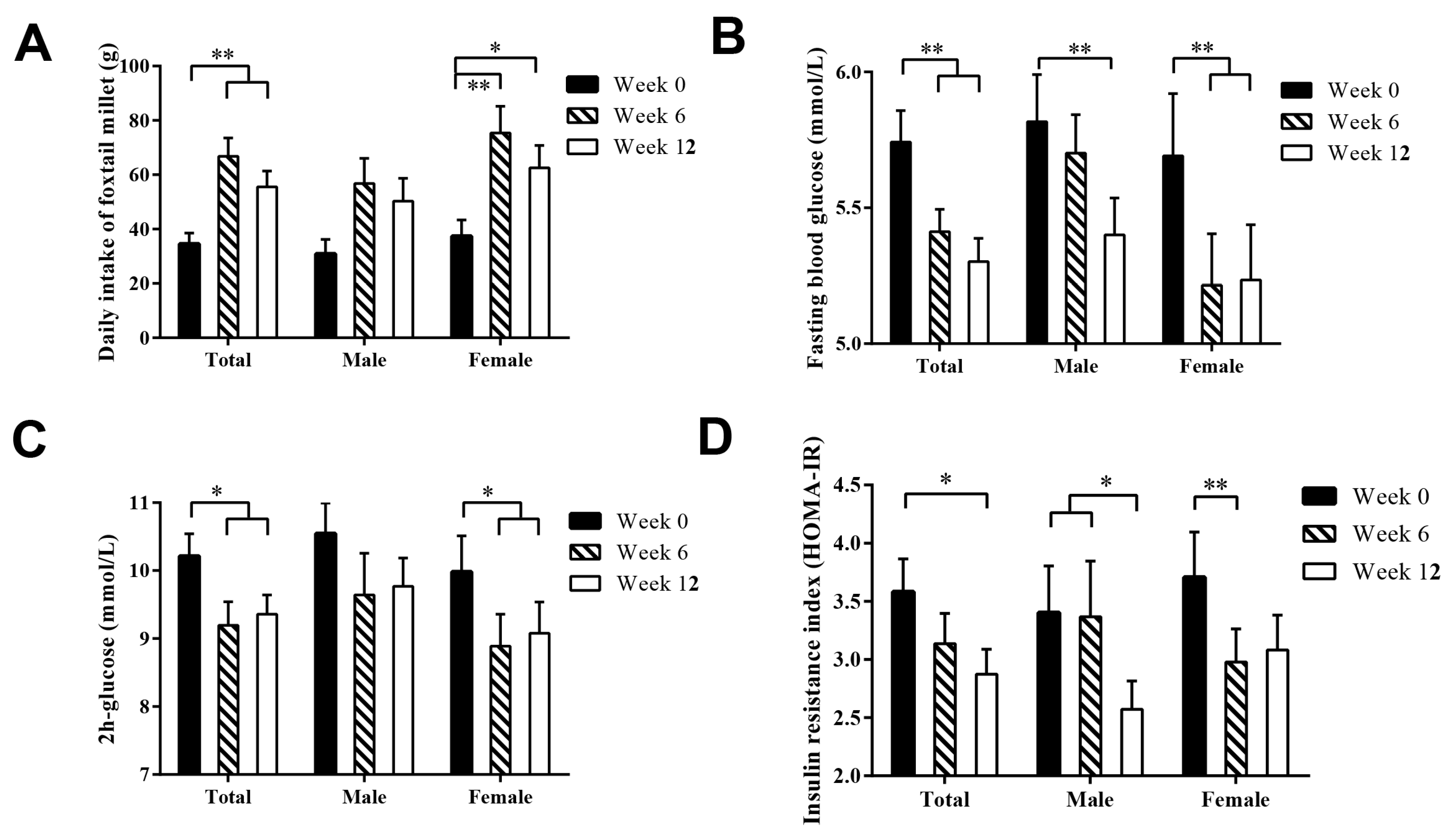