Sleep and wake cycle is regulated by the suprachiasmatic nucleus in the brain, which also coordinates the circadian rhythms in other tissues through the body [1]. Poor quantity and quality of sleep have been suggested to be adversely associated with a range of metabolic and cardiovascular systems, as well as quality of life [2,3]. Impaired sleep quantity and quality of sleep may be manifested as sleep disorder symptoms including daytime sleepiness, daytime falling asleep, and snoring at night. An increasing number of studies has found the associations between dietary macronutrients consumption and sleep outcomes. For example, carbohydrate with high glycemic index facilitated sleep onset, while low fiber, high saturated fat and sugar intake are associated with lighter and less restorative sleep with more arousals [4,5,6]. Sleep duration is positively associated with consumption of iron and zinc, but negatively associated with vitamin K and B12 [7]. However, the research of micronutrients and sleep is limited, and the findings are inconsistent.
Magnesium, a cofactor involved in more than 300 enzyme systems, regulates diverse biochemical reactions in the body [8]. Recently, magnesium has also been found to regulate cellular timekeeping in both animal and plant cells [9], thus it is beneficial to maintain the normal circadian rhythms and ensure a quality sleep in humans. Magnesium supplement use improves insomnia symptom among older people in a double-blind placebo-controlled clinical trial [10]. Low dietary magnesium intake was found to be significantly associated with depression [11]. It is known that depression is associated with poor sleep. However, the studies on dietary magnesium and sleep are limited.
The major dietary sources of magnesium include green leafy vegetables, whole grains, nuts, and legumes. These foods products are relatively inexpensive in China where average daily intakes are high compared to Western countries. We hypothesized that high intake of magnesium is beneficial for the prevention of sleep disorder symptoms including daytime falling asleep, sleepiness and snoring. Therefore, the present study aimed to investigate the associations between baseline dietary magnesium intake and sleep symptoms at follow-up using five-year longitudinal data from the Jiangsu Nutrition Study.

Data from the Jiangsu Nutrition Study cohort were used in the current study. Detailed methodology has been described previously [12]. In brief, in 2002, 2849 adults at least 20 years old living in two cities and six rural areas in Jiangsu Province took part in the Chinese National Nutrition and Health Survey. In 2007, an attempt to recontact all 1628 original participants was made and 1492 participated undertook the follow-up interview. For the current analysis, we included only those subjects with baseline (in 2002) magnesium intake and sleep records at follow-up (in 2007) (n = 1487) (Figure 1). The study was conducted according to the guidelines in the Declaration of Helsinki, and all procedures were approved by the Jiangsu Provincial Centre for Disease Control and Prevention. Informed consent for participation was obtained from each participant.

Dietary data including magnesium intake were obtained by food weighing plus consecutive individual 3-day food records (including one weekend) that recorded all foods consumed by everyone in the household [13]. At the beginning and end of the 3-day survey, investigators weighed all the food stocked in the household. All purchases, home production, and processed snack foods were weighed and recorded each day. Nutrient intake was calculated using the Chinese Food Composition Table [14].

At baseline in 2002, only sleep duration was collected but both sleep duration and self-reported daytime falling asleep were collected at follow-up in 2007. Self-reported sleep disorder symptoms were determined by relevant questions. Daytime falling asleep was determined by the question “Do you fall asleep involuntarily during the day? (1) no; (2) yes; (3) don’t know”; Daytime sleepiness was assessed by the question “Do you feel sleepy during the day? (1) never; (2) occasionally; (3) sometimes; (4) often and (5) frequently”; and snoring during the night was determined by the question ”Does your partner complain that you snore during the night? (1) never; (2) occasionally; (3) sometimes; (4) often; (5) frequently”.

2.5. Anthropometric Measurement and Other Variables

In both 2002 and 2007 anthropometry was conducted using standard protocols and techniques. Body weight was measured in light indoor clothing without shoes to the nearest 0.1 kg. Height was measured without shoes to the nearest mm using a stadiometer. Body mass index (BMI) was calculated as weight in kilogram divided by the square of height in meters. BMI was subsequently categorized into four groups underweight (<18.5 kg/m2), normal weight (18.5–23.9 kg/m2), overweight (24–27.9 kg/m2) and obese (≥28 kg/m2) respectively according to the guideline for Chinese adults [15]. Waist circumference was measured to the nearest mm midway between the inferior margin of the last rib and the crest of the ilium, in the mid-auxiliary line in a horizontal plane. Blood pressure was measured twice with a mercury sphygmomanometer on the right upper arm of the subject, who was seated for 5 min before the measurement. The mean of these two measurements was used in the analyses. Hypertension was defined as a systolic blood pressure above 140 mmHg and/or a diastolic blood pressure above 90 mmHg or the use of antihypertensive drugs.

Y.C. carried out the data analyses and wrote the manuscript; A.W.T., S.Z., S.A., E.A. and Z.S. critically reviewed the manuscript and approved the final version.

This research received no specific grant from any funding agency, commercial or not-for-profit sectors.

The authors are grateful to the participating regional Centres for Disease Control and Prevention in Jiangsu Province, including the Nanjing, Xuzhou, Jiangyin, Taicang, Suining, Jurong, Sihong and Haimen centres, for the support in data collection.

The authors declared that there are no conflicts of interest. 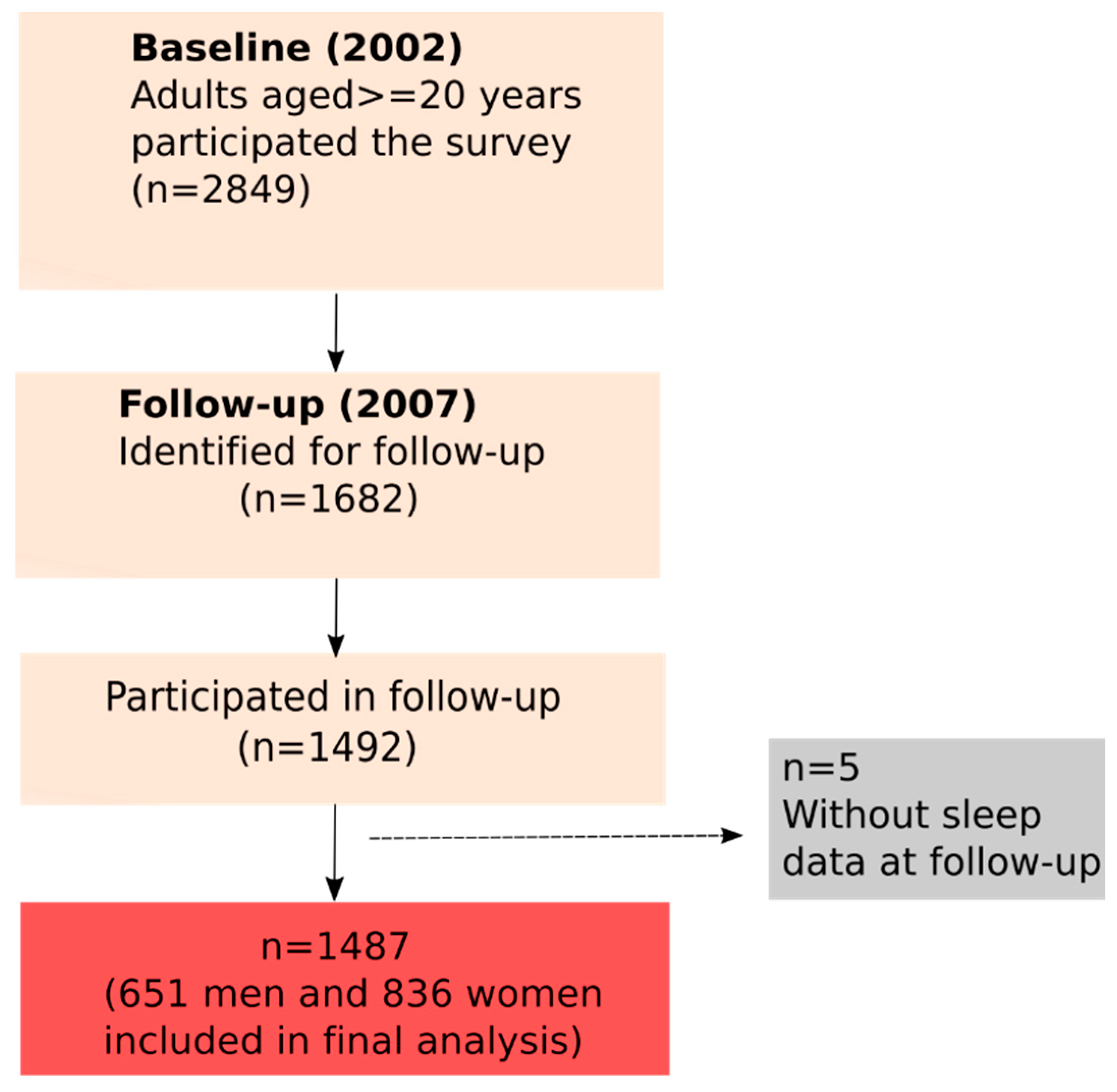