Selenium Status Is Not Associated with Cognitive Performance: A Cross-Sectional Study in 154 Older Australian Adults
Previous Article in Journal

Cognitive Functioning of Geriatric Patients: Is Hypovitaminosis D the Next Marker of Cognitive Dysfunction and Dementia?

(1) Background: Chlorogenic acids (CGAs) have been attracting interest of late, owing to their health benefits. Here, we performed a randomized, double-blind, placebo-controlled trial to investigate whether CGAs improved cognitive function in humans. (2) Methods: Thirty-eight healthy participants were assigned to either the CGA group, which was given CGA-added beverage daily for 16 weeks, or the placebo group. Cognitive functions were assessed using the Japanese version of the CNS Vital Signs (Cognitrax). (3) Results: The CGA group showed significant increase in the Cognitrax domain scores for motor speed, psychomotor speed, and executive function compared with the placebo group, as well as an improvement in the shifting attention test scores. In blood analysis, the CGA group showed increased levels of apolipoprotein A1 and transthyretin, both of which are putative biomarkers for early-stage cognitive decline. (4) Conclusions: These results suggest that CGAs may improve some cognitive functions, which would help in the efficient performance of complex tasks. View Full-Text
Keywords: chlorogenic acid; cognitive functions; psychomotor speed chlorogenic acid; cognitive functions; psychomotor speed
►▼ Show Figures 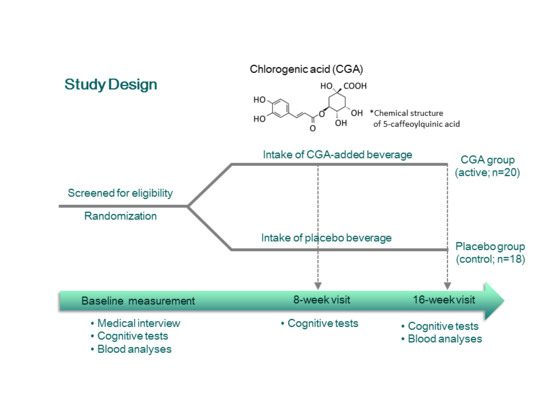