Infant Development at the Age of 6 Months in Relation to Feeding Practices, Iron Status, and Growth in a Peri-Urban Community of South Africa
Previous Article in Journal

Early nutrition plays an important role in development and may constitute a relevant contributor to the onset of obesity in adulthood. The aim of this study was to evaluate the long-term impact of maternal leucine (Leu) supplementation during lactation on progeny in rats. A chow diet, supplemented with 2% Leu, was supplied during lactation (21 days) and, from weaning onwards, was replaced by a standard chow diet. Then, at adulthood (6 months of age), this was replaced with hypercaloric diets (either with high-fat (HF) or high-carbohydrate (HC) content), for two months, to induce obesity. Female offspring from Leu-supplemented dams showed higher increases in body weight and in body fat (62%) than their respective controls; whereas males were somehow protected (15% less fat than the corresponding controls). This profile in Leu-females was associated with altered neuronal architecture at the paraventricular nucleus (PVN), involving neuropeptide Y (NPY) fibers and impaired expression of neuropeptides and factors of the mTOR signaling pathway in the hypothalamus. Interestingly, leptin and adiponectin expression in adipose tissue at weaning and at the time before the onset of obesity could be defined as early biomarkers of metabolic disturbance, predisposing towards adult obesity under the appropriate environment. View Full-Text
Keywords: leucine supplementation; metabolic imprinting; perinatal nutrition; obesity; biomarkers leucine supplementation; metabolic imprinting; perinatal nutrition; obesity; biomarkers
►▼ Show Figures 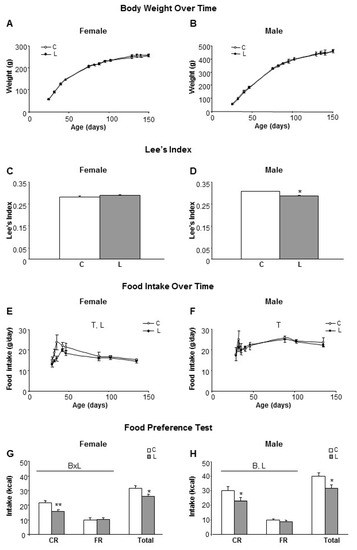