Eating Patterns in Patients with Compensated Cirrhosis: A Case-Control Study
Next Article in Special Issue

Validation of the English Version of the 14-Item Mediterranean Diet Adherence Screener of the PREDIMED Study, in People at High Cardiovascular Risk in the UK
Previous Article in Journal

Mediterranean Diet and Other Dietary Patterns in Primary Prevention of Heart Failure and Changes in Cardiac Function Markers: A Systematic Review
Previous Article in Special Issue

Impact of Consuming Extra-Virgin Olive Oil or Nuts within a Mediterranean Diet on DNA Methylation in Peripheral White Blood Cells within the PREDIMED-Navarra Randomized Controlled Trial: A Role for Dietary Lipids

Adherence to the Mediterranean Diet and Inflammatory Markers

The traditional Mediterranean diet (MD) is characterized by a high intake of vegetables, legumes, fruits and nuts and cereals (which in the past were largely unrefined), a high intake of olive oil, but a low intake of saturated lipids, a moderately high intake of fish (depending on the proximity of the sea), a low-to-moderate intake of dairy products (and then mostly in the form of cheese or yoghurt), a low intake of meat and poultry and a regular, but moderate intake of ethanol, primarily in the form of wine and generally during meals [1,2]. The traditional Balearic diet corresponds to the typical Mediterranean dietary pattern (MDP) [3]. Overall, the MDP is considered a healthy prudent dietary pattern, and a high adherence to it has been associated with a better health status, due to the protective effect that this pattern shows against various chronic diseases [4,5,6] including a favorable effect on total mortality, cardiovascular disease and several cancers [1,6,7]. The MD has been also proposed as one of the determinants of the longevity of these populations [8]. Adherence to a healthy dietary pattern has been shown to be inversely associated with metabolic syndrome (MetS) [9,10], some of its components [11] and type-2 diabetes [12]. The MetS is a cluster of common cardiovascular risk factors, including central obesity, hyperglycemia, low High-density lipoprotein (HDL)-cholesterol concentrations, hypertension and hypertriglyceridemia. The association of MetS with the risk of developing diabetes and cardiovascular disease (CVD) is well documented, implying a greater risk of mortality [13,14].
Lately, it has also been proposed that markers of systemic inflammation may be included in the MetS definition [15]. Although inflammation is a normal defense mechanism that protects the body against infection or other insults, pathological inflammation is associated with tissue damage and disease [16]. In this sense, low-grade systemic inflammation appears to play an important role in the pathophysiology of obesity, insulin resistance, CVD and the anomalous coagulation process [10,17]. The chronic inflammatory response is characterized by abnormal cytokine production and the activations of inflammatory signaling pathways [18,19]. Adipose tissue is currently considered to be hormonally active and to take part in the control of metabolism. Adipose tissue secretes a large number of physiologically-active peptides that have common properties with cytokines, and therefore referred to as adipocytokines [20]. Some of these adipocytokines are leptin, the inflammatory cytokines tumor necrosis factor α (TNF-α) and interleukin-6 (IL-6), plasminogen activator inhibitor 1 (PAI-1), resistin, angiotensinogen, as well as the anti-inflammatory cytokine adiponectin pro-inflammatory mediators and a reduced production of adiponectin [17,21,22]. This implies that measures focused on the reduction of the inflammatory situation would improve the risk factors associated with MetS. Studies assessing the association of the adherence to MD with diverse inflammatory biomarkers in healthy persons reported inverse correlations [23,24].
A growing body of evidence suggests that the protective effects of the MD may result, at least in part, from its anti-inflammatory properties [25]. Low-grade chronic inflammation has been involved as a potential mediator for the development of many cardio-metabolic diseases. Therefore, studying the relation between the diet quality and inflammatory markers will be interesting. The aim of this study was to assess the relationship between inflammatory markers and adherence to the MD in adults and adolescents of the Balearics Islands, a Mediterranean region, and to assess how the level of adherence to the MD could affect the levels of inflammatory markers.

This study is part of two larger research projects in which the target population solely consisted of inhabitants aged between 12 and 17 years old and 16–65 years old living on the Balearic Islands, which has been described in more detail elsewhere [26,27]. Participants were invited to provide blood samples in order to determine the biochemical parameters. Five hundred and ninety-eight subjects (219 males and 379 females) took part in the biochemical phase. The reasons for not taking part were (a) the subjects declined or (b) the parents of adolescents did not authorize the blood sample provision. Participants were divided into two groups: adolescents (12–17 years; 146 males and 218 females) and adults (18–65 years; 73 males and 161 females). The study protocol was in accordance with the Declaration of Helsinki and was approved by the Balearic Islands Ethics Committee (Approval Reference Number IB/2251/14-PI).

Dietary questionnaires and a global questionnaire incorporating questions related to socio-economic status (based on the occupation and classified as low, medium and high, according to the Spanish Society of Epidemiology methodology [28]), education level (grouped according to years and type of education: low, <6 years at school; medium, 6–12 years of education; high, >12 years of education) and lifestyle factors and health status were utilized (i.e., smoking habit (no; yes; occasionally, <1 cigarette/day) and alcohol consumption (no; yes)).
Dietary questionnaires were interviewer administered and included two 24-h diet recalls and a semiquantitative food-frequency questionnaire (FFQ) previously validated [29] and covers 145 food items (118 of the original validated FFQ plus the most characteristic Balearic Islands foods in order to make the interviewee answer easy) arranged by food type. Frequency of food consumption was based on times that food items were consumed (frequency per day, week or month). Consumption <1/month was considered no consumption. Daily consumption (g) was determined by dividing the reported amount of the intake by the frequency per day (d). The 24-h recall was carried out twice during the study period; the first in the warm season (May–September) and the second in the cold season (November–March). This was to avoid the influence of seasonal variations. To avoid bias brought on by day-to-day intake variability, the questionnaires were administered from Monday–Sunday. Conversion of food into nutrients was made using a self-made computerized program based on Spanish [30,31] and European [32] food composition tables and complemented with food composition data available for Majorcan food items [33]. Volumes and portion sizes were reported in natural units, household measures or with the aid of a book of photographs [34]. Information about food consumption patterns was obtained from the food frequency questionnaire, whereas information on nutrient intake was derived from the average food daily consumption reported in the two 24-h recalls [33]. Identification of underreported food intake was made using the energy intake:basal metabolic rate (EI:BMR) ratio. In adults, an EI:BMR ratio <1.14 classified the individual as an under-reporter [35]. In adolescents, an EI:BMR ratio of <0.92 (boys) and <0.85 (girls) was considered to represent underreporting [36]. Under-reporters did not take part in the biochemical phase in order to avoid a confounding factor.

Height was determined using a mobile stadiometer (Kawe 44444, Kirchner & Wilhelm GmBH Co., KG, Asperg, Germany), with the subject’s head in the Frankfurt plane. Body weight was determined to the nearest 100 g using a digital scale (Tefal, sc9210, Groupe SEB, Rumilly, France). The subjects were weighed in bare feet and light underwear, which was accounted for by subtracting 300 g from the measured weight. The body mass index (BMI) was also calculated.
Triceps skinfold (TSF) and subscapular skinfold thickness (SCSF) were measured using a Holtain skinfold caliper (Tanner/Whitehouse, Crymych, U.K.), and the mean of three measurements (right arm) was used to calculate body fat (BF) as described previously [34].
Waist circumference (WC) and hip circumference (HC) were measured using a non-stretchable measuring tape (Kawe 43972, Kirchner & Wilhelm GmBH Co., KG, Asperg, Germany). The subjects were asked to stand erect on a flat surface in a relaxed position with both feet together. WC was measured as the smallest horizontal girth between the costal margins and the iliac crests at minimal respiration. HC was taken as the greatest circumference at the level of the greater trochanter (the widest portion of the hip) on both sides. For both WC and HC, two measurements were made to the nearest 0.1 cm, and the mean of the two readings was taken as the final value. The waist-to-hip ratio (WHR) was also calculated.
Automated (Omron, M4-I, Healthcare Co. Ltd., Kyoto, Japan) blood pressure (BP) measurements to the nearest 1 mmHg were taken from seated participants with the right arm resting and palm facing upward. Two readings were taken 5 min apart, and the mean of the two readings was taken. If the difference between the first and the second reading was ≥10 mmHg for systolic blood pressure (SBP) and/or ≥6 mmHg for diastolic blood pressure (DBP), then a third measurement was made, and the mean of all three measurements was taken.

Venous blood samples were obtained from the antecubital vein in suitable vacutainers at 08:00 h of the interview day after 12-h overnight fasting conditions. Plasma was obtained after centrifugation of the blood samples at 900× g for 20 min at 4 °C. The plasma phase was then collected and freshly used for biochemical assays. Circulating levels of adiponectin (AD), leptin, tumor necrosis factor alpha (TNF-α) and plasminogen activator inhibitor 1 (PAI-1) were determinated by the fluorokine MultiAnalyte Profiling (MAP) Human Obesity Base kit based on Luminex®-technology (R&D systems®, Minneapolis, MN, USA). High-sensitivity C-reactive protein (hs-CPR) was measured by nephelometry (Dade Behring BNII, Marburg, Germany).

Statistical analyses were performed with SPSS Version 24.0 for Windows (SPSS Inc., Chicago, IL, USA). According to previous studies in which sex differences in inflammatory markers were found [43,44], in the present study, all tests were stratified by sex and age. The median value of adherence to the MD was calculated in each age group, and subjects were categorized into two groups (above and below the median value). All continuous variables were expressed as the mean ± standard deviation. Anthropometric measurements were compared between both age groups in each sex. Inflammatory markers were compared between groups of adherence to the MD (above and below the median) in each sex and age group. Differences between group means were tested using Analysis of Variance (ANOVA). Differences in MetS prevalence were calculated by means of χ2. Correlation between inflammatory markers and dietary components of the MDS were also assessed using the Pearson correlation coefficient. A p-value ≤ 0.05 was considered statistically significant.

This study provides further information on the relationship between the MDP and inflammatory markers. However, this study has several limitations. First, the present cross-sectional design gives limited ability to elucidate the causal relationship between inflammatory markers and MDP. Second, there is a potential lack of generalization of the results due to the sample size obtained for each age group of males and females. Third, despite the guidance of licensed dieticians, diet was self-reported, and we cannot rule out some recall bias.

The present results show that low adherence to the MDP is directly associated with a worse profile of plasmatic inflammation markers, especially in the male adult population, with the female population only showing significance for PAI-1 and hs-CRP. Evidence that overeating and adiposity contribute to systemic inflammation and development of metabolic syndrome raises the possibility that lifestyle interventions may provide effective means of reducing risk factors for CVD. Future longitudinal studies can explore whether the decrease in risk associated with lifestyle changes is mediated by decreases in systemic inflammation. 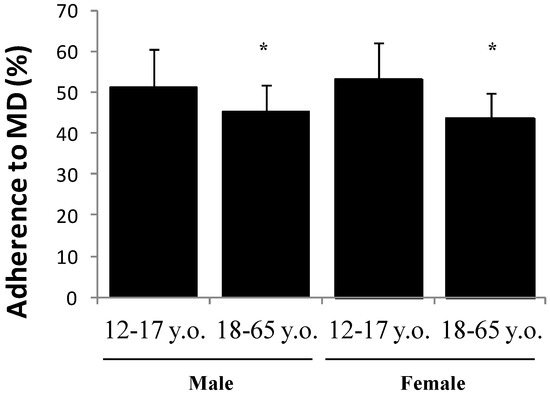 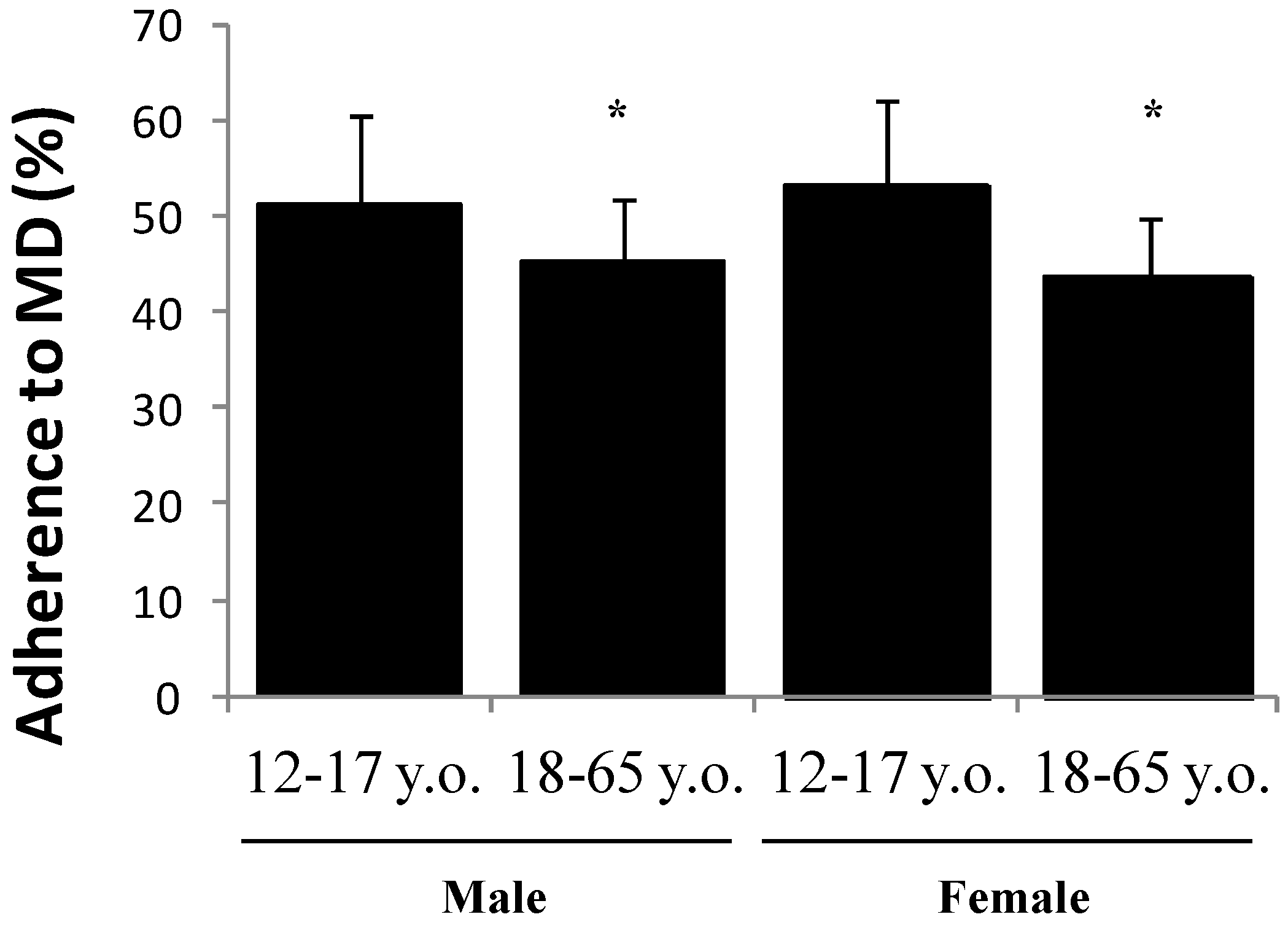