Passive microwave measurements from space are known to be sensitive to the freeze/thaw (F/T) state of the land surface. These measurements are at a coarse spatial resolution (~15–50 km) and the spatial variability of the microwave emissions within a pixel can have important effects on the interpretation of the signal. An L-band ground-based microwave radiometer campaign was conducted in the Canadian Prairies during winter 2014–2015 to examine the spatial variability of surface emissions during frozen and thawed periods. Seven different sites within the Kenaston soil monitoring network were sampled five times between October 2014 and April 2015 with a mobile ground-based L-band radiometer system at approximately monthly intervals. The radiometer measurements showed that in a seemingly homogenous prairie landscape, the spatial variability of brightness temperature (TB) is non-negligible during both frozen and unfrozen soil conditions. Under frozen soil conditions, TB was negatively correlated with soil permittivity (εG). This correlation was related to soil moisture conditions before the main freezing event, showing that the soil ice volumetric content at least partly affects TB. However, because of the effect of snow on L-Band emission, the correlation between TB and εG decreased with snow accumulation. When compared to satellite measurements, the average TB of the seven plots were well correlated with the Soil Moisture Ocean Salinity (SMOS) TB with a root mean square difference of 8.1 K and consistent representation of the strong F/T signal (i.e., TB increases and decreases when soil freezing and thawing, respectively). This study allows better quantitative understanding of the spatial variability in L-Band emissions related to landscape F/T, and will help the calibration and validation of satellite-based F/T retrieval algorithms. View Full-Text
Keywords: L-Band; spatial variability; soil permittivity; snow density; freeze/thaw; SMOS L-Band; spatial variability; soil permittivity; snow density; freeze/thaw; SMOS
►▼ Show Figures 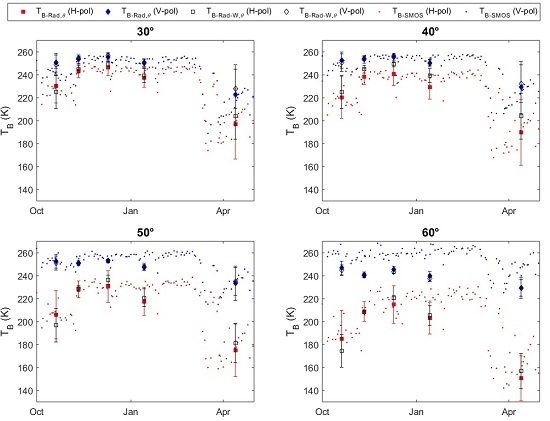