The 2015 Surge of Hispar Glacier in the Karakoram

The Karakoram mountain range is well known for its numerous surge-type glaciers of which several have recently surged or are still doing so. Analysis of multi-temporal satellite images and digital elevation models have revealed impressive details about the related changes (e.g., in glacier length, surface elevation and flow velocities) and considerably expanded the database of known surge-type glaciers. One glacier that has so far only been reported as impacted by surging tributaries, rather than surging itself, is the 50 km long main trunk of Hispar Glacier in the Hunza catchment. We here present the evolution of flow velocities and surface features from its 2015/16 surge as revealed from a dense time series of SAR and optical images along with an analysis of historic satellite images. We observed maximum flow velocities of up to 14 m d−1 (5 km a−1) in spring 2015, sudden drops in summer velocities, a second increase in winter 2015/16 and a total advance of the surge front of about 6 km. During a few months the surge front velocity was much higher (about 90 m d−1) than the maximum flow velocity. We assume that one of its northern tributary glaciers, Yutmaru, initiated the surge at the end of summer 2014 and that the variability in flow velocities was driven by changes in the basal hydrologic regime (Alaska-type surge). We further provide evidence that Hispar Glacier has surged before (around 1960) over a distance of about 10 km so that it can also be regarded as a surge-type glacier. View Full-Text
Keywords: Karakoram; Hispar Glacier; surge; hydrology controlled; velocity; time series; Landsat; Sentinel-1; Corona Karakoram; Hispar Glacier; surge; hydrology controlled; velocity; time series; Landsat; Sentinel-1; Corona
►▼ Show Figures 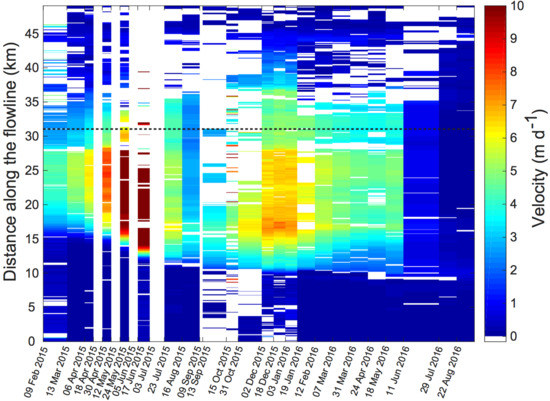