Artisanal and Small-scale Gold Mining (ASGM) within the Amazon region has created several environmental impacts, such as mercury contamination and changes in water quality due to increased siltation. This paper describes the effects of water siltation on the underwater light environment of rivers under different levels of gold mining activities in the Tapajós River Basin. Furthermore, it investigates possible impacts on the phytoplankton community. Two field campaigns were conducted in the Tapajós River Basin, during high water level and during low water level seasons, to measure Inherent and Apparent Optical Properties (IOPs, AOPs), including scattering (b) and absorption (a) coefficients and biogeochemical data (sediment content, pigments, and phytoplankton quantification). The biogeochemical data was separated into five classes according to the concentration of total suspended solids (TSS) ranging from 1.8 mg·L−1 to 113.6 mg·L−1. The in-water light environment varied among those classes due to a wide range of concentrations of inorganic TSS originated from different levels of mining activities. For tributaries with low or no influence of mining tailings (TSS up to 6.8 mg·L−1), waters are relatively more absorbent with b:a ratio of 0.8 at 440 nm and b660 magnitude of 2.1 m−1. With increased TSS loadings from mining operations (TSS over 100 mg·L−1), the scattering process prevails over absorption (b:a ratio of 10.0 at 440 nm), and b660 increases to 20.8 m−1. Non-impacted tributaries presented a critical depth for phytoplankton productivity of up to 6.0 m with available light evenly distributed throughout the spectra. Whereas for greatly impacted waters, attenuation of light was faster, reducing the critical depth to about 1.7 m, with most of the available light comprising of red wavelengths. Overall, a dominance of diatoms was observed for the upstream rivers, whereas cyanobacteria prevailed in the low section of the Tapajós River. The results suggest that the spatial and temporal distribution of phytoplankton in the Tapajós River Basin is not only a function of light availability, but rather depends on the interplay of factors, including flood pulse, water velocity, nutrient availability, and seasonal variation of incoming irradiance. Ongoing research indicates that the effects of mining tailings on the aquatic environment, described here, are occurring in several rivers within the Amazon River Basin. View Full-Text
Keywords: optical properties; biogeochemical data; inorganic particles; light attenuation; critical depth optical properties; biogeochemical data; inorganic particles; light attenuation; critical depth
►▼ Show Figures 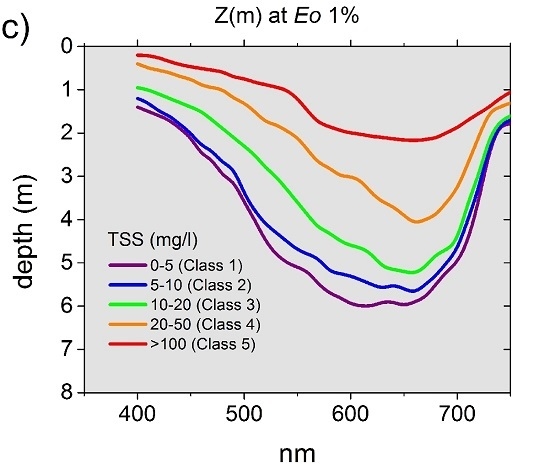