Active landslides have three major effects on landscapes: (1) land cover change, (2) topographical change, and (3) above ground biomass change. Data derived from multi-temporal Light Detection and Ranging technology (LiDAR) are used in combination with multi-temporal orthophotos to quantify these changes between 2006 and 2012, caused by an active deep-seated landslide near the village of Doren in Austria. Land-cover is classified by applying membership-based classification and contextual improvements based on the synergy of orthophotos and LiDAR-based elevation data. Topographical change is calculated by differencing of LiDAR derived digital terrain models. The above ground biomass is quantified by applying a local-maximum algorithm for tree top detection, in combination with allometric equations. The land cover classification accuracies were improved from 65% (using only LiDAR) and 76% (using only orthophotos) to 90% (using data synergy) for 2006. A similar increase from respectively 64% and 75% to 91% was established for 2012. The increased accuracies demonstrate the effectiveness of using data synergy of LiDAR and orthophotos using object-based image analysis to quantify landscape changes, caused by an active landslide. The method has great potential to be transferred to larger areas for use in landscape change analyses. View Full-Text
Keywords: data synergy; OBIA; Landslide; above ground biomass; LiDAR; orthophotos; land cover change; Vorarlberg data synergy; OBIA; Landslide; above ground biomass; LiDAR; orthophotos; land cover change; Vorarlberg
►▼ Show Figures 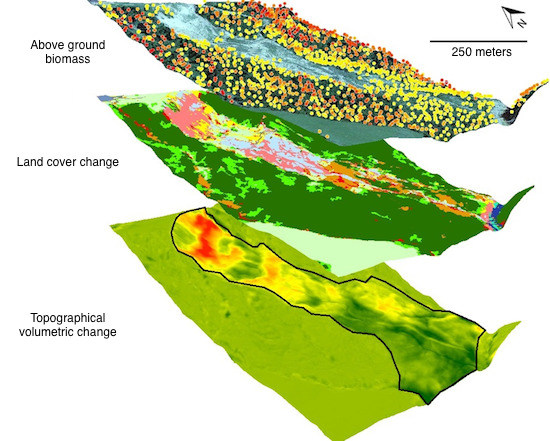