We quantified the spatio-temporal patterns of land cover/land use (LCLU) change to document and evaluate the daytime surface urban heat island (SUHI) for five hot subtropical desert cities (Beer Sheva, Israel; Hotan, China; Jodhpur, India; Kharga, Egypt; and Las Vegas, NV, USA). Sequential Landsat images were acquired and classified into the USGS 24-category Land Use Categories using object-based image analysis with an overall accuracy of 80% to 95.5%. We estimated the land surface temperature (LST) of all available Landsat data from June to August for years 1990, 2000, and 2010 and computed the urban-rural difference in the average LST and Normalized Difference Vegetation Index (NDVI) for each city. Leveraging non-parametric statistical analysis, we also investigated the impacts of city size and population on the urban-rural difference in the summer daytime LST and NDVI. Urban expansion is observed for all five cities, but the urbanization pattern varies widely from city to city. A negative SUHI effect or an oasis effect exists for all the cities across all three years, and the amplitude of the oasis effect tends to increase as the urban-rural NDVI difference increases. A strong oasis effect is observed for Hotan and Kharga with evidently larger NDVI difference than the other cities. Larger cities tend to have a weaker cooling effect while a negative association is identified between NDVI difference and population. Understanding the daytime oasis effect of desert cities is vital for sustainable urban planning and the design of adaptive management, providing valuable guidelines to foster smart desert cities in an era of climate variability, uncertainty, and change. View Full-Text
Keywords: surface urban heat island; oasis effect; subtropical desert cities; remote sensing surface urban heat island; oasis effect; subtropical desert cities; remote sensing
►▼ Show Figures 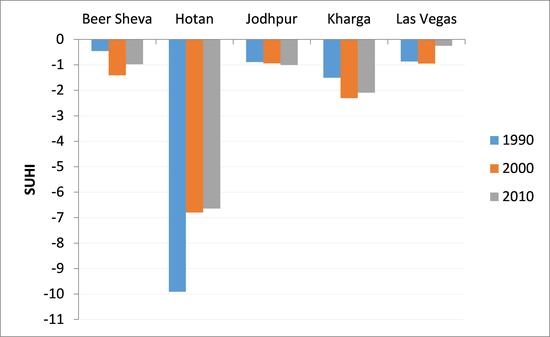