The availability of new fAPAR satellite products requires simultaneous efforts in validation to provide users with a better comprehension of product performance and evaluation of uncertainties. This study aimed to validate three fAPAR satellite products, GEOV1, MODIS C5, and MODIS C6, against ground references to determine to what extent the GCOS requirements on accuracy (maximum 10% or 5%) can be met in a deciduous beech forest site in a gently and variably sloped mountain site. Three ground reference fAPAR, differing for temporal (continuous or campaign mode) and spatial sampling (single points or Elementary Sampling Units—ESUs), were collected using different devices: (1) Apogee (defined as benchmark in this study); (2) PASTIS; and (3) Digital cameras for collecting hemispherical photographs (DHP). A bottom-up approach for the upscaling process was used in the present study. Radiometric values of decametric images (Landsat-8) were extracted over the ESUs and used to develop empirical transfer functions for upscaling the ground measurements. The resulting high-resolution ground-based maps were aggregated to the spatial resolution of the satellite product to be validated considering the equivalent point spread function of the satellite sensors, and a correlation analysis was performed to accomplish the accuracy assessment. PASTIS sensors showed good performance as fAPARPASTIS appropriately followed the seasonal trends depicted by fAPARAPOGEE (benchmark) (R2 = 0.84; RMSE = 0.01). Despite small dissimilarities, mainly attributed to different sampling schemes and errors in DHP classification process, the agreement between fAPARPASTIS and fAPARDHP was noticeable considering all the differences between both approaches. The temporal courses of the three satellite products were found to be consistent with both Apogee and PASTIS, except at the end of the summer season when ground data were more affected by senescent leaves, with both MODIS C5 and C6 displaying larger short-term variability due to their shorter temporal composite period. MODIS C5 and C6 retrievals were obtained with the backup algorithm in most cases. The three green fAPAR satellite products under study showed good agreement with ground-based maps of canopy fAPAR at 10 h, with RMSE values lower than 0.06, very low systematic differences, and more than 85% of the pixels within GCOS requirements. Among them, GEOV1 fAPAR showed up to 98% of the points lying within the GCOS requirements, and slightly lower values (mean bias = −0.02) as compared with the ground canopy fAPAR, which is expected to be only slightly higher than green fAPAR in the peak season. View Full-Text
Keywords: fAPAR; validation; PROBA-V GEOV1; MODIS C5; MODIS C6; beech forest; up-scaling; GCOS requirements; in-situ comparison and evaluation fAPAR; validation; PROBA-V GEOV1; MODIS C5; MODIS C6; beech forest; up-scaling; GCOS requirements; in-situ comparison and evaluation
►▼ Show Figures 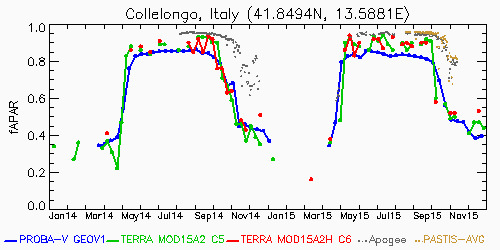