Using Satellite Data for the Characterization of Local Animal Reservoir Populations of Hantaan Virus on the Weihe Plain, China

Article
Green Spaces as an Indicator of Urban Health: Evaluating Its Changes in 28 Mega-Cities
by

By 2014, there were 28 megacities according to the United Nation Population Division [38]. We selected all of them as our study area. These megacities are distributed in 18 countries (Figure 1). Their socio-economic and climate conditions are varied (detailed information in Table S1). It is estimated that around one in eight of the world’s urban inhabitants live in these megacities.

Reference samples of six types of land covers, including impervious surface, tree/shrub, grass, crop, water, and bare soil, were collected from Landsat images by using high-resolution images on Google Earth as references. We collected 30 to 100 polygons for each class in each megacity for year 2005 and 2015, respectively. In total, 156,478 pixels were collected for 2005 and 205,609 pixels were collected for 2015 as training samples (Table 1). We then uploaded the reference samples to GEE, which is a planetary-scale platform for earth science data and analysis [39]. The samples were used as training samples for land cover classification.

We used all available standard terrain corrected (L1T) Landsat 5 TM, 7 ETM+ and 8 OLI/TIRS imagery of 2004–2006 (circa 2005), 2014–2016 (circa 2015) with cloud cover <70%. The data format is the pre-processed top of atmosphere (TOA) reflectance Landsat data [39]. We did not use the atmospherically corrected Landsat images in this study because when we performed this study the atmospherically corrected Landsat images had not yet been ingested into GEE platform completely. Winter images were excluded as we mainly focused on the growing seasons. In total, 4452 scenes for 2004–2006 and 6371 scenes for 2014–2016 that covering the study area were used for compositing images and land cover classification.
We used a simple cloud score algorithm available in GEE (https://developers.google.com/earth-engine/landsat) to mask pixels that had high potential of clouds. This algorithm scores Landsat pixels by their relative cloudiness with a value ranging from 0 to 100 [40]. A threshold value of 20 was used to mask the cloudy pixels. We calculated the Normalized difference vegetation index (NDVI) [41], modified normalized difference water index (MNDWI) [42], and Normalized difference built-up index (NDBI) [43] to enhance the information on vegetation, water, and impervious surface. They were used together with the blue, green, red, near infrared, and two shortwave infrared bands of the Landsat image for further processing.
To deal with the inconsistent coverage of clouds, we used percentile-based image compositing method [44,45] to extract selected percentile value of each pixel for each of the nine bands (i.e., blue, green, red, near infrared, shortwave infrared band1-2, NDVI, MNDWI, and NDBI). The percentile-based image compositing method is a pixel-based compositing method, so it is different from the traditional scene-based mosaicking. In this method, all available image values of a specific pixel location for each band were ranked from minimum to maximum. Then values for specific percentiles were selected. For example, the 0 percentile value refers to the minimum value of the pixel for a specific band. This percentile-based compositing method can capture phenology information without any explicit assumption and prior knowledge of the timing of phenology [46]. Land cover classification with good accuracy has been achieved using the percentile based composite method [45,46,47]. In this study, we included percentile values at 0%, 10%, 25%, 50%, 75%, 90% and 100% by following Hansen’s method [45]. In total, 63 features (nine bands multiplied by seven percentile values) were extracted and used for land cover classification.

Land cover classification was performed on the GEE platform using random forest (RF) classifier. RF is an ensemble classifier consists of many tree-structured classifiers [48]. RF can handle many training data and variables and keep accuracy when a proportion of data is missing [49,50,51]. In this study, the number of trees was set to 100, and the number of variables per split was set to the square root of the number of variables.
After classification, we extracted 300 pixels from each classified image using a proportional stratified random sampling method. The proportion of pixels sampled in stratum (i.e., a land cover class) was in accordance to the percentage of the land cover class in all land cover types. We also set a minimum sample size of 20 pixels for each class. We then interpreted these validation samples visually on the composited Landsat images and Google Earth high-resolution images. Based on the interpretation result, we estimated the accuracy of classification results.

We created the border of urban built-up areas for each city from the land cover map. First, we generated single class intensity maps for impervious surface, water bodies, crop, and bare soil. The intensity maps were created using a 1 km by 1 km moving window [52,53] in ArcMap 10.1 (Esri Inc., Redlands, CA, USA). The intensity map was a ratio (0–1) map of a specific type of land cover. Then we used a multiple-criteria approach to determine whether a pixel (1 km resolution) belonged to the urban built-up area. Urban built-up areas usually have a relatively high proportion of impervious surfaces and low proportions of agricultural lands, water, and barren lands. The criteria were: (1) the impervious surface intensity of a pixel was greater than 0.2 [54]; and (2) the sum of water, crop and bare soil of a pixel was less than 0.5. The result was a built-up/non built-up map at 1-km resolution. We then converted the built-up/non built-up map to polygons and excluded small (less than 5 km2) and dispersed polygons. These are mainly dispersed rural settlements. The boundary of built-up areas for each megacity was then generated by choosing the largest built-up polygon and keeping polygons in 2 km from the largest built-up polygon [52,53]. The boundaries were manually modified by referencing to the high-resolution image on Google Earth if necessary. The generated boundaries files were available as supplementary files.
Finally, we extracted out tree/shrub and grass cover within the border of built-up area from the land cover map and merged them as urban green spaces.

We used the paired t-test to examine whether changes of availability and accessibility indicators of urban green spaces between 2005 and 2015 were significant. We first performed correlation analysis (Supplementary Materials Figure S8) to explore the correlation between explanatory factors (i.e., climatic and socio-economic factors) and availability and accessibility of urban green spaces. Then we performed the multiple general linear model regression analysis to examine the influence of climatic and socio-economic factors on availability and accessibility of urban green spaces. The correlation analysis and general linear regression analysis were performed using package cor.test and lm with R (version 3.3.1; R Development Core Team, Vienna, Austria), respectively. Annual precipitation (AP), annual mean temperature (AMT), population density (PD), and per capita GDP (PCGDP) were included in this study. We chose these climatic and socio-economic variables because they were widely used in studies [30,31] and the data needed for analysis are available. Values of climatic variables were collected from WorldClim [56] and values of socio-economic variables were obtained from Dobbs et al. [57]. Values of these variables for each city can be found in the Supplementary Materials (Table S1). The explanatory variables (AP, AMT, PD and PCGDP) were normalized to avoid differences in the magnitude of these variables before running the multivariate regression analysis. All data analyses were performed using R.

4.1. Availability of Urban Green Spaces and Changes of Health Benefit

4.2. Accessibility of Urban Green Spaces and Changes of Health Benefit

4.3. Joint Influences of Availability and Accessibility

4.4. Limitations of the Current Study

We want to thank Nicholas Clinton from Google for providing us free access to Google Earth Engine and for helping us with technical issues. This study was supported by National Natural Science Foundation of China (Grant number 31570458, 2016) and National High Technology Research and Development Program (Grant number 2013AA122804, 2013–2016). 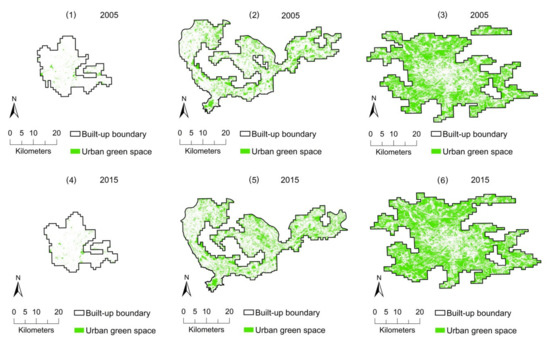 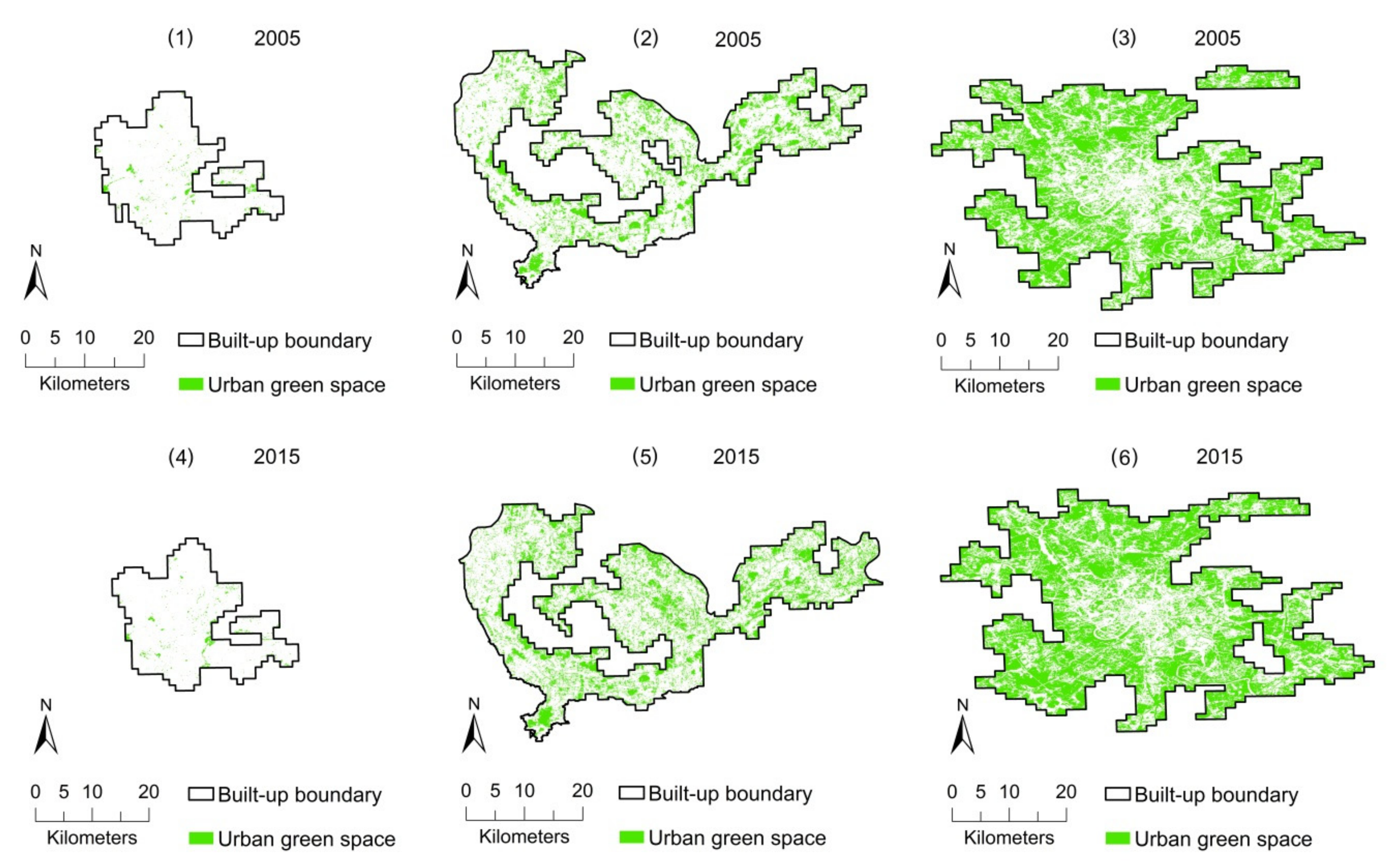 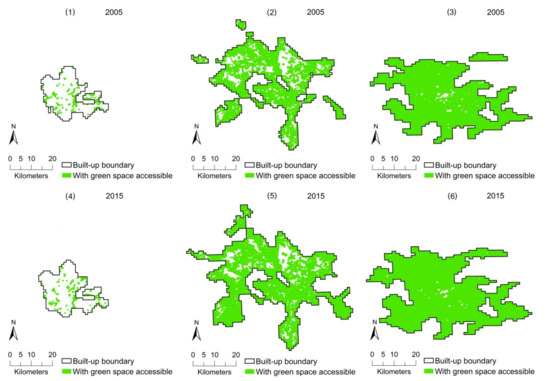