A decadal survey of atmospheric aerosols over Egypt and selected cities and regions is presented using daily aerosol optical depth (AOD) data from NASA’s Moderate Resolution Imaging Spectroradiometer (MODIS) at 550 nm wavelength onboard the Aqua satellite. We explore the AOD spatio-temporal variations over Egypt during a 12-year record (2003 to 2014) using the MODIS high-resolution (10 km) Level 2 data product. Five cities and two geographic regions that feature different landscape and human activities were selected for detailed analysis. For most of the examined areas, AOD is found to be most frequent in the 0.2–0.3 range, and the highest mean AOD was found to be over Cairo, Alexandria, and the Nile Delta region. Severe events are identified based on AOD higher than a selected threshold. Most of these events are engendered by sand and dust storms that originate from the Western Desert during January–April. Spatial analysis indicates that they cover the Nile Delta region, including cities of Cairo and Alexandria, on the same day. Examination of the spatial gradient of AOD along the four cardinal directions originating from the city’s center reveals seasonally dependent gradients in some cases. The gradients have been linked to locations of industrial activity. No trend of AOD has been observed in the studied areas during the study period, though data from Cairo and Asyut reveal a slight linear increase of AOD. Considering Cairo is commonly perceived as a city of poor air quality, the results show that local events are fairly constrained. The study highlights spatial and seasonal distributions of AOD and links them to geographic and climatic conditions across the country. View Full-Text
Keywords: aerosols; MODIS; Egypt; aerosol optical depth; AOD spatial and temporal analysis aerosols; MODIS; Egypt; aerosol optical depth; AOD spatial and temporal analysis
►▼ Show Figures 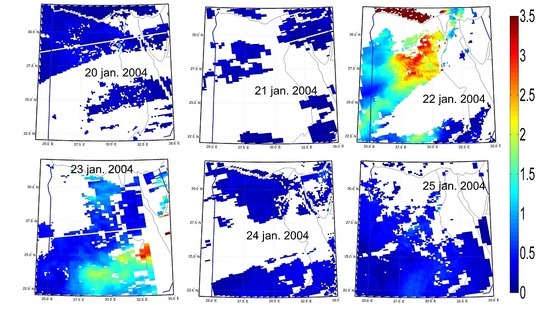