Potential of ALOS2 and NDVI to Estimate Forest Above-Ground Biomass, and Comparison with Lidar-Derived Estimates

Remote sensing supports carbon estimation, allowing the upscaling of field measurements to large extents. Lidar is considered the premier instrument to estimate above ground biomass, but data are expensive and collected on-demand, with limited spatial and temporal coverage. The previous JERS and ALOS SAR satellites data were extensively employed to model forest biomass, with literature suggesting signal saturation at low-moderate biomass values, and an influence of plot size on estimates accuracy. The ALOS2 continuity mission since May 2014 produces data with improved features with respect to the former ALOS, such as increased spatial resolution and reduced revisit time. We used ALOS2 backscatter data, testing also the integration with additional features (SAR textures and NDVI from Landsat 8 data) together with ground truth, to model and map above ground biomass in two mixed forest sites: Tahoe (California) and Asiago (Alps). While texture was useful to improve the model performance, the best model was obtained using joined SAR and NDVI (R2 equal to 0.66). In this model, only a slight saturation was observed, at higher levels than what usually reported in literature for SAR; the trend requires further investigation but the model confirmed the complementarity of optical and SAR datatypes. For comparison purposes, we also generated a biomass map for Asiago using lidar data, and considered a previous lidar-based study for Tahoe; in these areas, the observed R2 were 0.92 for Tahoe and 0.75 for Asiago, respectively. The quantitative comparison of the carbon stocks obtained with the two methods allows discussion of sensor suitability. The range of local variation captured by lidar is higher than those by SAR and NDVI, with the latter showing overestimation. However, this overestimation is very limited for one of the study areas, suggesting that when the purpose is the overall quantification of the stored carbon, especially in areas with high carbon density, satellite data with lower cost and broad coverage can be as effective as lidar. View Full-Text
Keywords: ALOS2; mixed forest; biomass; lidar; NDVI ALOS2; mixed forest; biomass; lidar; NDVI
►▼ Show Figures 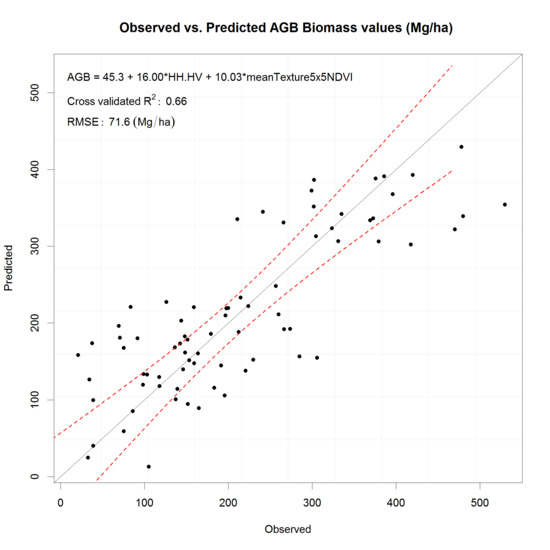