Mapping forest composition is a major concern for forest management, biodiversity assessment and for understanding the potential impacts of climate change on tree species distribution. In this study, the suitability of a dense high spatial resolution multispectral Formosat-2 satellite image time-series (SITS) to discriminate tree species in temperate forests is investigated. Based on a 17-date SITS acquired across one year, thirteen major tree species (8 broadleaves and 5 conifers) are classified in a study area of southwest France. The performance of parametric (GMM) and nonparametric (k-NN, RF, SVM) methods are compared at three class hierarchy levels for different versions of the SITS: (i) a smoothed noise-free version based on the Whittaker smoother; (ii) a non-smoothed cloudy version including all the dates; (iii) a non-smoothed noise-free version including only 14 dates. Noise refers to pixels contaminated by clouds and cloud shadows. The results of the 108 distinct classifications show a very high suitability of the SITS to identify the forest tree species based on phenological differences (average estimated by cross-validation based on 1235 field-collected plots). SVM is found to be the best classifier with very close results from the other classifiers. No clear benefit of removing noise by smoothing can be observed. Classification accuracy is even improved using the non-smoothed cloudy version of the SITS compared to the 14 cloud-free image time series. However conclusions of the results need to be considered with caution because of possible overfitting. Disagreements also appear between the maps produced by the classifiers for complex mixed forests, suggesting a higher classification uncertainty in these contexts. Our findings suggest that time-series data can be a good alternative to hyperspectral data for mapping forest types. It also demonstrates the potential contribution of the recently launched Sentinel-2 satellite for studying forest ecosystems. View Full-Text
Keywords: tree species; forest; time series; classification; smoothing; Whittaker; phenology; biodiversity tree species; forest; time series; classification; smoothing; Whittaker; phenology; biodiversity
►▼ Show Figures 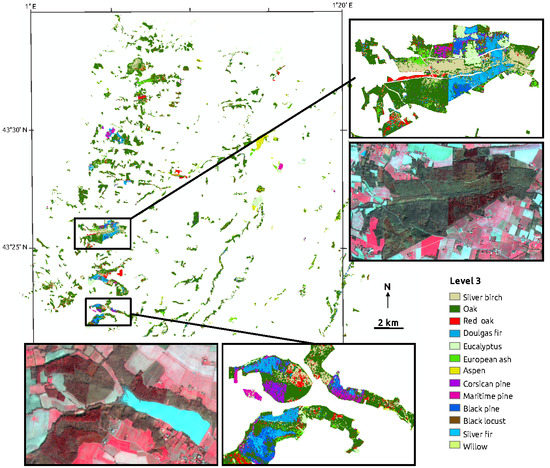