Multi-Decadal Monitoring of Lake Level Changes in the Qinghai-Tibet Plateau by the TOPEX/Poseidon-Family Altimeters: Climate Implication
Previous Article in Journal

The Tibetan Plateau (TP) has been observed by satellite optical remote sensing, altimetry, and gravimetry for a variety of geophysical parameters, including water storage change. However, each of these sensors has its respective limitation in the parameters observed, accuracy and spatial-temporal resolution. Here, we utilized an integrated approach to combine remote sensing imagery, digital elevation model, and satellite radar and laser altimetry data, to quantify freshwater storage change in a twin lake system named Chibuzhang Co and Dorsoidong Co in the central TP, and compared that with independent observations including mass changes from the Gravity Recovery and Climate Experiment (GRACE) data. Our results show that this twin lake, located within the Tanggula glacier system, remained almost steady during 1973–2000. However, Dorsoidong Co has experienced a significant lake level rise since 2000, especially during 2000–2005, that resulted in the plausible connection between the two lakes. The contemporary increasing lake level signal at a rate of 0.89 ± 0.05 cm·yr−1, in a 2° by 2° grid equivalent water height since 2002, is higher than the GRACE observed trend at 0.41 ± 0.17 cm·yr−1 during the same time span. Finally, a down-turning trend or inter-annual variability shown in the GRACE signal is observed after 2012, while the lake level is still rising at a consistent rate. View Full-Text
Keywords: Tibetan Plateau; water mass balance; remote sensing Tibetan Plateau; water mass balance; remote sensing
►▼ Show Figures 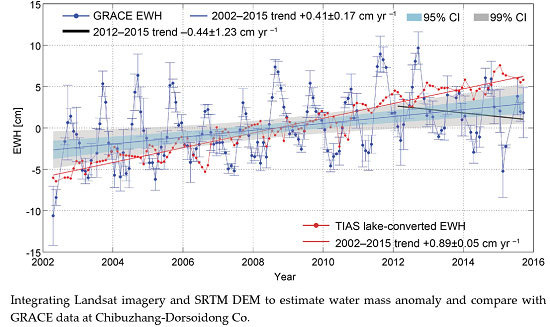