Variability and Changes in Climate, Phenology, and Gross Primary Production of an Alpine Wetland Ecosystem

The Louisiana coast is among the most productive coastal areas in the US and home to the largest coastal wetland area in the nation. However, Louisiana coastal wetlands have been disappearing at an alarming rate due to natural and anthropogenic processes, including sea level rise, land subsidence and infrastructure development. Wetland loss occurs mainly along the tidal zone, which varies in width and morphology along the Louisiana shoreline. In this study, we use Interferometric Synthetic Aperture Radar (InSAR) observations to detect the extent of the tidal inundation zone and evaluate the interaction between tidal currents and coastal wetlands. Our data consist of ALOS and Radarsat-1 observations acquired between 2006–2011 and 2003–2008, respectively. Interferometric processing of the data provides detailed maps of water level changes in the tidal zone, which are validated using sea level data from a tide gauge station. Our results indicate vertical tidal changes up to 30 cm and horizontal tidal flow limited to 5–15 km from open waters. The results also show that the tidal inundation is disrupted by various man-made structures, such as canals and roads, which change the natural tidal flow interaction with the coast. View Full-Text
Keywords: InSAR; wetlands; tidal inundation; remote sensing InSAR; wetlands; tidal inundation; remote sensing
►▼ Show Figures 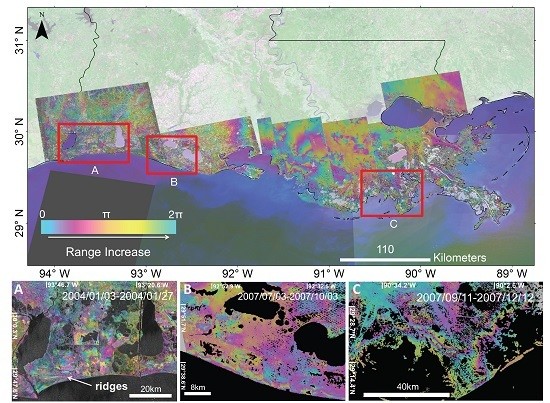