Examining the Influence of Seasonality, Condition, and Species Composition on Mangrove Leaf Pigment Contents and Laboratory Based Spectroscopy Data
Previous Article in Journal

Remote sensing of suspended particulate matter, SPM, from space has long been used to assess its spatio-temporal variability in various coastal areas. The associated algorithms were generally site specific or developed over a relatively narrow range of concentration, which make them inappropriate for global applications (or at least over broad SPM range). In the frame of the GlobCoast project, a large in situ data set of SPM and remote sensing reflectance, Rrs(λ), has been built gathering together measurements from various coastal areas around Europe, French Guiana, North Canada, Vietnam, and China. This data set covers various contrasting coastal environments diversely affected by different biogeochemical and physical processes such as sediment resuspension, phytoplankton bloom events, and rivers discharges (Amazon, Mekong, Yellow river, MacKenzie, etc.). The SPM concentration spans about four orders of magnitude, from 0.15 to 2626 g·m−3. Different empirical and semi-analytical approaches developed to assess SPM from Rrs(λ) were tested over this in situ data set. As none of them provides satisfactory results over the whole SPM range, a generic semi-analytical approach has been developed. This algorithm is based on two standard semi-analytical equations calibrated for low-to-medium and highly turbid waters, respectively. A mixing law has also been developed for intermediate environments. Sources of uncertainties in SPM retrieval such as the bio-optical variability, atmospheric correction errors, and spectral bandwidth have been evaluated. The coefficients involved in these different algorithms have been calculated for ocean color (SeaWiFS, MODIS-A/T, MERIS/OLCI, VIIRS) and high spatial resolution (LandSat8-OLI, and Sentinel2-MSI) sensors. The performance of the proposed algorithm varies only slightly from one sensor to another demonstrating the great potential applicability of the proposed approach over global and contrasting coastal waters. View Full-Text
Keywords: suspended particulate matter; coastal waters; ocean color; specific backscattering coefficient; empirical algorithm; semi-analytic algorithm suspended particulate matter; coastal waters; ocean color; specific backscattering coefficient; empirical algorithm; semi-analytic algorithm
►▼ Show Figures 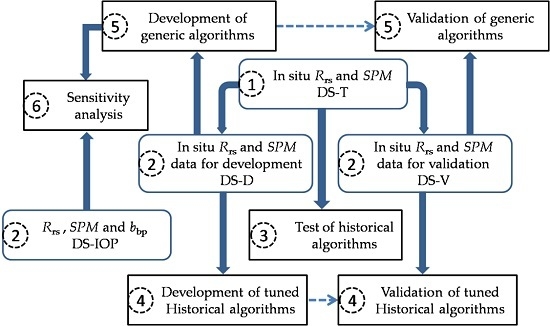