Assessment of GPM-IMERG and Other Precipitation Products against Gauge Data under Different Topographic and Climatic Conditions in Iran: Preliminary Results
Next Article in Special Issue

In recent years, satellite synthetic aperture radar interferometry (InSAR) has been adopted as a spaceborne geodetic tool to successfully measure surface deformation of a few well-known landslides in the Three Gorges area. In consideration of the fact that most events of slope failure happened at places other than those famous landslides since the reservoir impoundment in 2003, focusing on a limited number of slopes is insufficient to meet the requirements of regional-scale landslide disaster prevention and early warning. As a result, it has become a vital task to evaluate the overall stability of slopes across the vast area of Three Gorges using wide-coverage InSAR datasets. In this study, we explored the approach of carrying out joint analysis of multi-path InSAR data stacks for wide-area landslide deformation mapping. As an example, three ALOS (Advanced Land Observing Satellite) PALSAR (Phased Array type L-band Synthetic Aperture Radar) data stacks of neighboring ascending paths covering the area along the Yangtze River from Fengjie to Zigui were analyzed. A key problem to be solved is the separation of the tropospheric signal from the interferometric phase, for which we employed a hybrid description model of the atmospheric phase screen (APS) to improve APS estimation from time series interferograms. The estimated atmospheric phase was largely correlated with the seasonal rainfall in the temporal dimension. The experimental results show that about 30 slopes covering total areas of 48 km2 were identified to be landslides in active deformation and should be kept under routine surveillance. Analyses of time series displacement measurements revealed that most landslides in the mountainous area far away from Yangtze River suffered from linear deformation, whereas landslides located on the river bank were destabilized predominantly by the influences of reservoir water level fluctuation and rainfall. View Full-Text
Keywords: slow moving landslide; InSAR; Three Gorges; displacement; water level; rainfall slow moving landslide; InSAR; Three Gorges; displacement; water level; rainfall
►▼ Show Figures 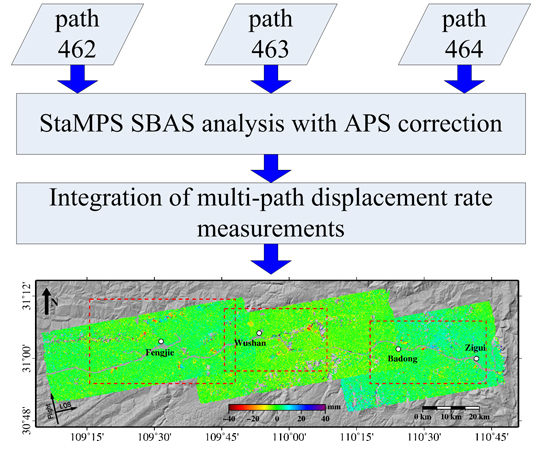