In this study, the recently launched Sentinel-2 (S2) optical satellite and the active radar Sentinel-1 (S1) satellite supported by active fire data from the MODIS sensor were used to detect and monitor forest fires in the Congo Basin. In the context of a very strong El Niño event, an unprecedented outbreak of fires was observed during the first months of 2016 in open forests formations in the north of the Republic of Congo. The anomalies of the recent fires and meteorological situation compared to historical data show the severity of the drought. Burnt areas mapped by the S1 SAR and S2 Multi Spectral Instrument (MSI) sensors highlight that the fires occurred mainly in Marantaceae forests, characterized by open tree canopy cover and an extensive tall herbaceous layer. The maps show that the origin of the fires correlates with accessibility to the forest, suggesting an anthropogenic origin. The combined use of the two independent and fundamentally different satellite systems of S2 and S1 captured an extent of 36,000 ha of burnt areas, with each sensor compensating for the weakness (cloud perturbations for S2, and sensitivity to ground moisture for S1) of the other. View Full-Text
Keywords: Sentinel-2; Sentinel-1; tropical rainforests; fires; burnt areas; Republic of Congo; logging roads Sentinel-2; Sentinel-1; tropical rainforests; fires; burnt areas; Republic of Congo; logging roads
►▼ Show Figures 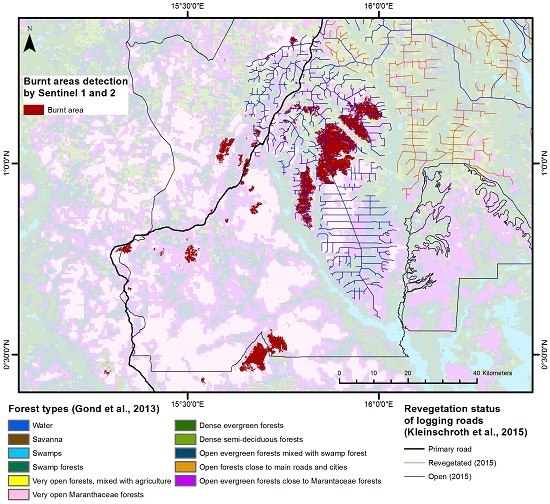