Pacaya volcano is a persistently active basaltic cone complex located in the Central American Volcanic Arc in Guatemala. In May of 2010, violent Volcanic Explosivity Index-3 (VEI-3) eruptions caused significant topographic changes to the edifice, including a linear collapse feature 600 m long originating from the summit, the dispersion of ~20 cm of tephra and ash on the cone, the emplacement of a 5.4 km long lava flow, and ~3 m of co-eruptive movement of the southwest flank. For this study, Interferometric Synthetic Aperture Radar (InSAR) images (interferograms) processed from both spaceborne Advanced Land Observing Satellite-1 (ALOS-1) and aerial Uninhabited Aerial Vehicle Synthetic Aperture Radar (UAVSAR) data acquired between 31 May 2010 and 10 April 2014 were used to measure post-eruptive deformation events. Interferograms suggest three distinct deformation processes after the May 2010 eruptions, including: (1) subsidence of the area involved in the co-eruptive slope movement; (2) localized deformation near the summit; and (3) emplacement and subsequent subsidence of about a 5.4 km lava flow. The detection of several different geophysical signals emphasizes the utility of measuring volcanic deformation using remote sensing techniques with broad spatial coverage. Additionally, the high spatial resolution of UAVSAR has proven to be an excellent compliment to satellite data, particularly for constraining motion components. Measuring the rapid initiation and cessation of flank instability, followed by stabilization and subsequent influence on eruptive features, provides a rare glimpse into volcanic slope stability processes. Observing these and other deformation events contributes both to hazard assessment at Pacaya and to the study of the stability of stratovolcanoes. View Full-Text
Keywords: volcano deformation; interferometric synthetic aperture radar; ALOS-1; UAVSAR volcano deformation; interferometric synthetic aperture radar; ALOS-1; UAVSAR
►▼ Show Figures 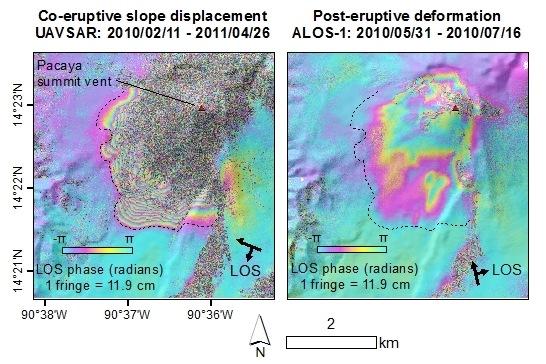