Remote Sensing Based Simple Models of GPP in Both Disturbed and Undisturbed Piñon-Juniper Woodlands in the Southwestern U.S.
Previous Article in Special Issue

The Morphology, Dynamics and Potential Hotspots of Land Surface Temperature at a Local Scale in Urban Areas

Current characterization of the Urban Heat Island (UHI) remains insufficient to support the effective mitigation and adaptation of increasing temperatures in urban areas. Planning and design strategies are restricted to the investigation of temperature anomalies at a city scale. By focusing on Land Surface Temperature of Wuhan, China, this research examines the temperature variations locally where mitigation and adaptation would be more feasible. It shows how local temperature anomalies can be identified morphologically. Technically, the MODerate-resolution Imaging Spectroradiometer satellite image products are used. They are first considered as noisy observations of the latent temperature patterns. The continuous latent patterns of the temperature are then recovered from these discrete observations by using the non-parametric Multi-Task Gaussian Process Modeling. The Multi-Scale Shape Index is then applied in the area of focus to extract the local morphological features. A triplet of shape, curvedness and temperature is formed as the criteria to extract local heat islands. The behavior of the local heat islands can thus be quantified morphologically. The places with critical deformations are identified as hotpots. The hotspots with certain yearly behavior are further associated with land surface composition to determine effective mitigation and adaptation strategies. This research can assist in the temperature and planning field on two levels: (1) the local land surface temperature patterns are characterized by decomposing the variations into fundamental deformation modes to allow a process-based understanding of the dynamics; and (2) the characterization at local scale conforms to planning and design conventions where mitigation and adaptation strategies are supposed to be more practical. The weaknesses and limitations of the study are addressed in the closing section. View Full-Text
Keywords: LST; morphology; local scale; hotspot; yearly dynamics; urban area LST; morphology; local scale; hotspot; yearly dynamics; urban area
►▼ Show Figures 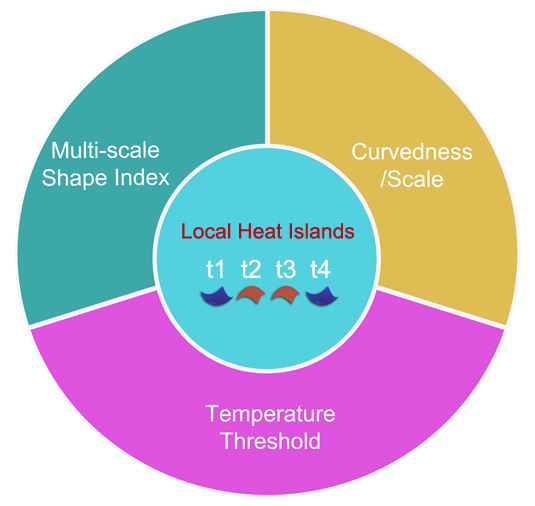