This paper presents the SPOT-4 (Take 5) experiment, aimed at providing time series of optical images simulating the repetitivity, the resolution and the large swath of Sentinel-2 images. The aim was to help users set up and test their applications and methods, before Sentinel-2 mission data become available. In 2016, when both Sentinel-2 satellites are operational, and for at least fifteen years, users will have access to high resolution time series of images systematically acquired every five days, over the whole Earth land surfaces. Thanks to Sentinel-2’s high revisit frequency, a given surface should be observed without clouds at least once a month, except in the most cloudy periods and regions. In 2013, the Centre National d’Etudes Spatiales (CNES) lowered the orbit altitude of SPOT-4, to place it on a five-day repeat cycle orbit for a duration of five months. This experiment started on 31 January 2013 and lasted until 19 June 2013. SPOT-4 images were acquired every fifth day, over 45 sites scattered in nearly all continents and covering very diverse biomes for various applications. Two ortho-rectified products were delivered for each acquired image that was not fully cloudy, expressed either as top of atmosphere reflectance (Level 1C) or as surface reflectance (Level 2A). An extensive validation campaign was held to check the performances of these products with regard to the multi-temporal registration, the quality of cloud masks, the accuracy of aerosol optical thickness estimates and the quality of surface reflectances. Despite high a priori geo-location errors, it was possible to register the images with an accuracy better than 0.5 pixels in the large majority of cases. Despite the lack of a blue band on the SPOT-4 satellite, the cloud and shadow detection yielded good results, while the aerosol optical thickness was measured with a root mean square error better than 0.06. The surface reflectances after atmospheric correction were compared with in situ data and other satellite data showing little bias and the standard deviation of surface reflectance errors in the range (0.01–0.02). The Take 5 experiment is being repeated in 2015 with the SPOT-5 satellite with an enhanced resolution. View Full-Text
Keywords: Sentinel-2; SPOT-4 (Take 5); time series; repetitivity; image registration; cloud detection; atmospheric correction; surface reflectance; validation Sentinel-2; SPOT-4 (Take 5); time series; repetitivity; image registration; cloud detection; atmospheric correction; surface reflectance; validation
►▼ Show Figures 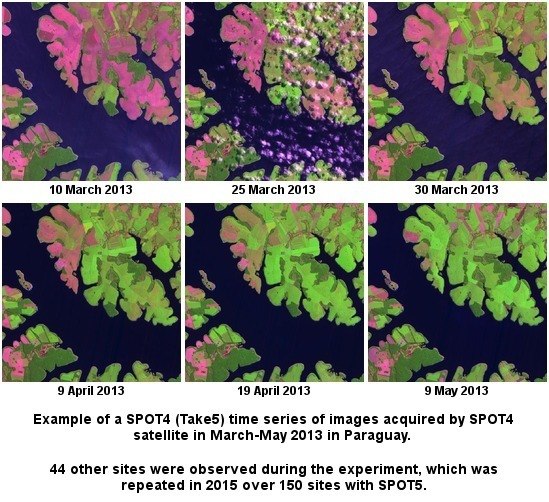