Airborne LiDAR Bathymetry (ALB) has been rapidly evolving in recent years and now allows fluvial topography to be mapped in high resolution (>20 points/m2) and height accuracy (<10 cm) for both the aquatic and the riparian area. This article presents methods for enhanced modeling and monitoring of instream meso- and microhabitats based on multitemporal data acquisition. This is demonstrated for a near natural reach of the Pielach River, with data acquired from April 2013 to October 2014, covering two flood events. In comparison with topographic laser scanning, ALB requires a number of specific processing steps. We present, firstly, a novel approach for modeling the water surface in the case of sparse water surface echoes and, secondly, a strategy for improved filtering and modeling of the Digital Terrain Model of the Watercourse (DTM-W). Based on the multitemporal DTM-W we discuss the massive changes of the fluvial topography exhibiting deposition/erosion of 103 m3 caused by the 30-years flood event in May 2014. Furthermore, for the first time, such a high-resolution data source is used for monitoring of hydro-morphological units (mesohabitat scale) including the consequences for the target fish species nase (Chondrostoma nasus, microhabitat scale). The flood events caused a spatial displacement of the hydro-morphological units but did not effect their overall frequency distribution, which is considered an important habitat feature as it documents resilience against disturbances. View Full-Text
Keywords: airborne LiDAR bathymetry; water surface modeling; digital terrain modeling; fluvial change detection; mesohabitat monitoring; microhabitat monitoring airborne LiDAR bathymetry; water surface modeling; digital terrain modeling; fluvial change detection; mesohabitat monitoring; microhabitat monitoring
►▼ Show Figures 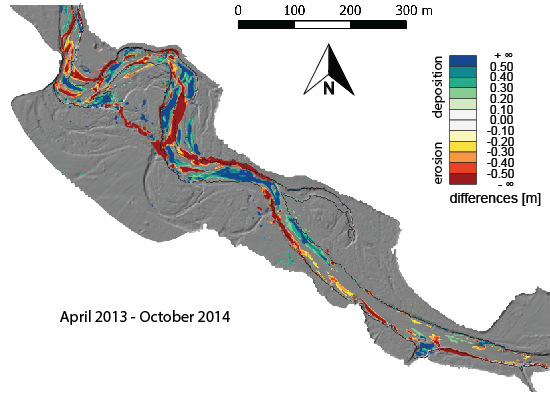