Shallow lakes, with depths less than ca. 3.5–4 m, are a ubiquitous feature of the Arctic Alaskan Coastal Plain, covering up to 40% of the land surface. With such an extended areal coverage, lakes and their ice regimes represent an important component of the cryosphere. The duration of the ice season has major implications for the regional and local climate, as well as for the physical and biogeochemical processes of the lakes. With day and night observations in all weather conditions, synthetic aperture radar (SAR) sensors provide year-round acquisitions. Monitoring the evolution of radar backscatter (σ°) is useful for detecting the timing of the beginning and end of the ice season. Analysis of the temporal evolution of C-band σ° from Advanced Synthetic Aperture Radar (ASAR) Wide Swath and RADARSAT-2 ScanSAR, with a combined frequency of acquisitions from two to five days, was employed to evaluate the potential of SAR to detect the timing of key lake-ice events. SAR observations from 2005 to 2011 were compared to outputs of the Canadian Lake Ice Model (CLIMo). Model simulations fall within similar ranges with those of the SAR observations, with a mean difference between SAR observations and model simulations of only one day for water-clear-of-ice (WCI) from 2006 to 2010. For freeze onset (FO), larger mean differences were observed. SAR analysis shows that the mean FO date for these shallow coastal lakes is 30 September and the mean WCI date is 5 July. Results reveal that greater variability existed in the mean FO date (up to 26 days) than in that of melt onset (MO) (up to 12 days) and in that of WCI (6 days). Additionally, this study also identifies limitations and provides recommendations for future work using C-band SAR for monitoring the lake- ice phenology of shallow Arctic lakes. View Full-Text
Keywords: Arctic lakes; break-up; freeze onset; synthetic aperture radar Arctic lakes; break-up; freeze onset; synthetic aperture radar
►▼ Show Figures 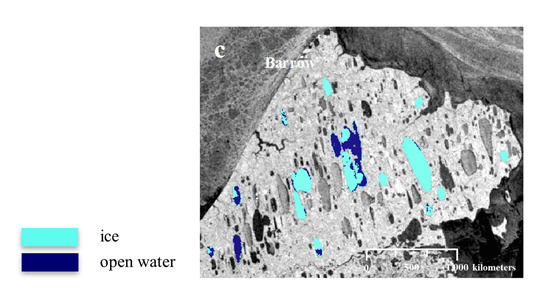