Global warming is posing a threat to the health and condition of forests as the amount and length of biotic and abiotic disturbances increase. Most methods for detecting disturbances and measuring forest health are based on multi- and hyperspectral imaging. We conducted a test with spruce and pine trees using a hyperspectral Lidar instrument in a laboratory to determine the capability of combined range and reflectance measurements to investigate forest health. A simple drought treatment was conducted by leaving the harvested trees outdoors without a water supply for 12 days. The results showed statistically significant variation in reflectance after the drought treatment for both species. However, the changes differed between the species, indicating that drought-induced alterations in spectral characteristics may be species-dependent. Based on our results, hyperspectral Lidar has the potential to detect drought in spruce and pine trees.
Keywords: Lidar; hyperspectral sensors; forest health; drought; declined trees; laser scanning; forestry Lidar; hyperspectral sensors; forest health; drought; declined trees; laser scanning; forestry

Full waveform hyperspectral Lidar is an instrument for measuring geometry and backscattered reflectance at several wavelengths simultaneously. The instrument uses a supercontinuum laser source, which sends nanosecond pulses of broadband white light. The echo waveform can be measured for each pulse with multiple wavelength channels. The design of the instrument has been described in detail by Hakala et al. [27].
The trees were measured in a laboratory under environmentally stable conditions with eight spectral channels (554.8, 623.5, 691.1, 725.5, 760.3, 795.0, 899.0 and 1000.4 nm, and full width at half maximum of 17–19 nm) from a 3-meter distance from the top of the tree (Figure 1). The diameter of the laser beam was about 4 mm at target, and divergence was 0.02°. The trees were positioned horizontally with the base of the tree on a concrete block and a plastic pole supporting the tree trunk so that the top of the canopy was pointing toward the scanner, simulating an airborne data acquisition, and each tree was measured separately (Figure 2). About 100,000 returns were recorded for each tree, depending on the tree size, with a maximum of two returns recorded for each pulse. The 3-D point clouds represent the whole trees, i.e., no effort was made to classify the data into branches and needles.

The trees, which were 3–3.5 meters in height and 5–6 cm in diameter at breast height, were cut and harvested 1–2 days before the measurements. The set of nine pine and nine spruce trees was first measured on 16 May 2012, and then again on 29 May 2012. As net photosynthesis and stomatal conductance is generally reduced after 2–3 days of drought [46], a drought treatment was conducted by leaving the harvested trees outdoors to lean against a wall in an upright position for 12 days with their bases lying on grass surface. The trees are referred to as “fresh trees” before the drought treatment and as “dry trees” after the treatment in the following text. Mean temperature during the treatment was 14 °C, and mean relative humidity was 59% (Figure 3). No measurements of leaf water content or water potential were conducted. The data were processed with Gaussian pulse fitting and calibrated to the backscattered reflectance factor using a reference target [27].

Table 1. The return type categories and their descriptions.
In addition to these features, vegetation indices used previously in drought-detection studies were calculated for each return from their reflectance data. The indices were a normalized difference vegetation index (1) and a modified water index (2) [32,47]. The NDVI is a commonly used multispectral vegetation index based on the difference in canopy reflectance at visible light (400–700 nm) and near-infrared (700–1100 nm) wavelength regions. The NDVI has a greater value for healthy vigorous canopies and a lower value for stressed canopies. We used red at 691.1 nm and near-infrared at 795.0 nm, which have been employed in similar studies before [48,49]. The WI, which utilizes a weak water absorption band at 970 nm and a reference band at 900 nm [50], was developed for estimation of plant water content and water stress at ground level [32]. The index was modified and a water absorption band at 1000.4 nm was used instead of 970 nm, which was not available. The same statistical features were calculated for NDVI and WI as for the reflectance value distributions.
Paired-sample and one-tailed t-tests were then used to test whether there were statistically significant differences in the reflectance values between the scans at tree level and to determine the direction of change in the reflectance values after the drought treatment. As the sample size was small and groups of nine samples were compared, the statistical results were validated with a non-parametric Wilcoxon signed-rank test for the group differences.
NDVI = (R795.0 − R691.1)/( R795.0 + R691.1)
WI = R1000.4/(R899)

The return-type distributions were statistically different (p < 0.05) after the treatment of both species. The percentage of single returns increased in the pines as opposed to a decrease in first returns and a slight decrease in second returns (Table 2). The effect of the treatment on return-type distribution was different for the spruces, as the percentage of single returns decreased after the treatment but the share of first returns increased significantly. 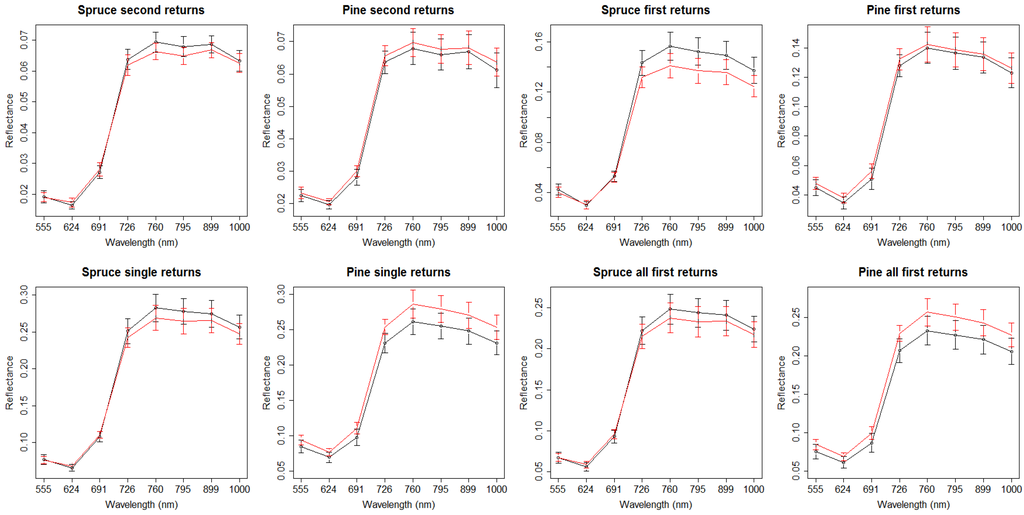 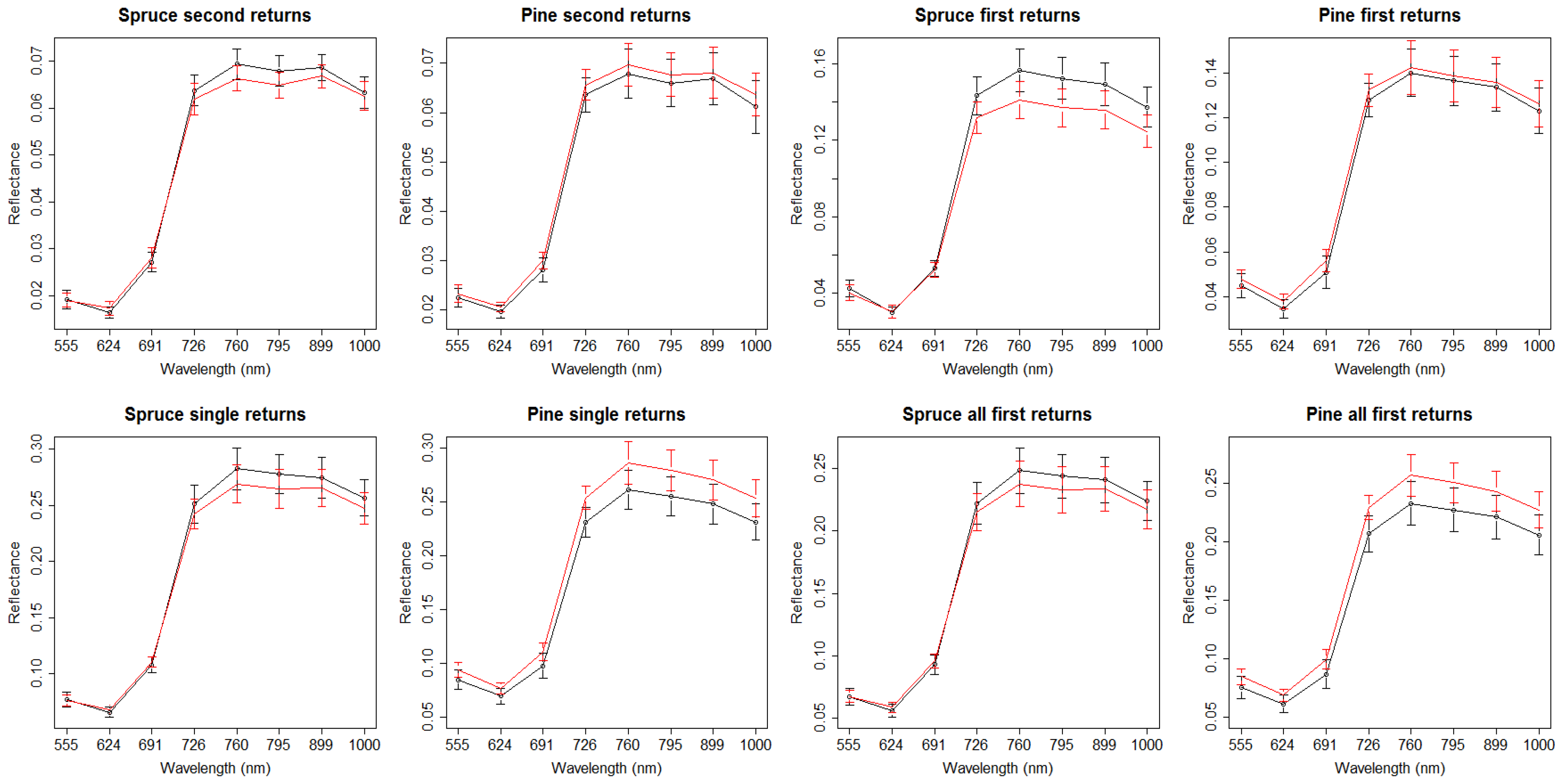 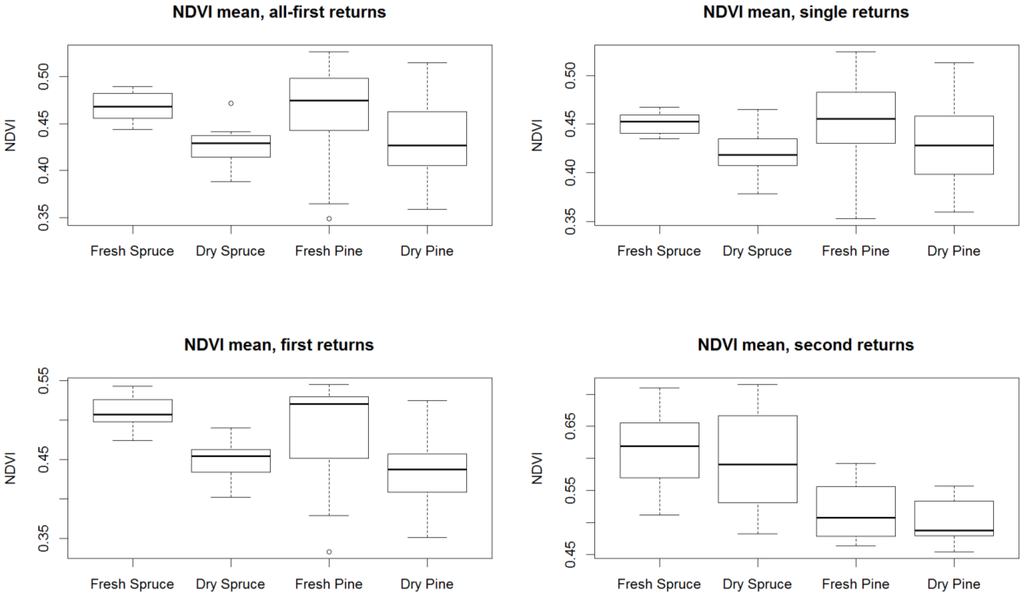 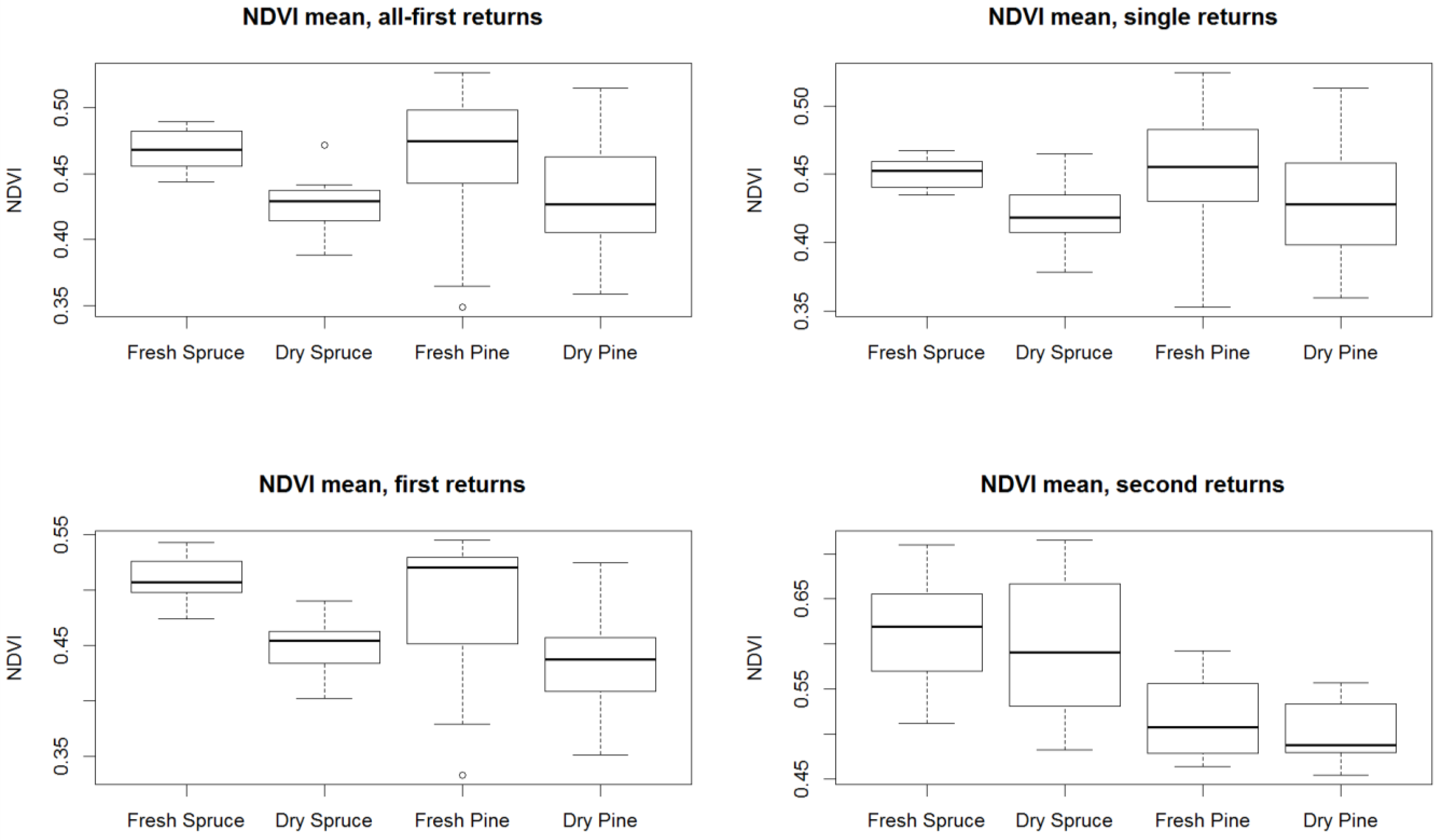 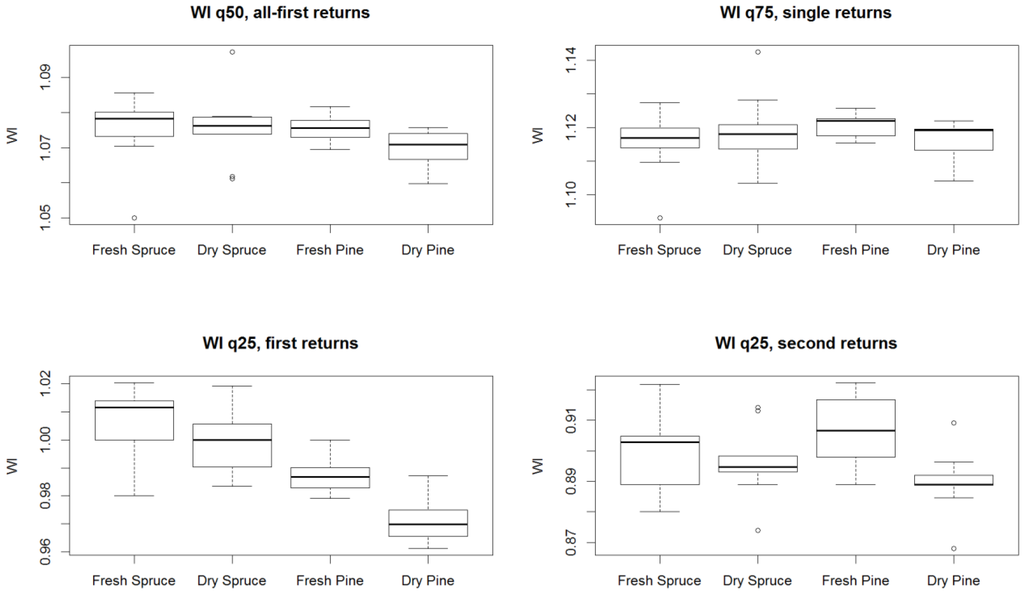 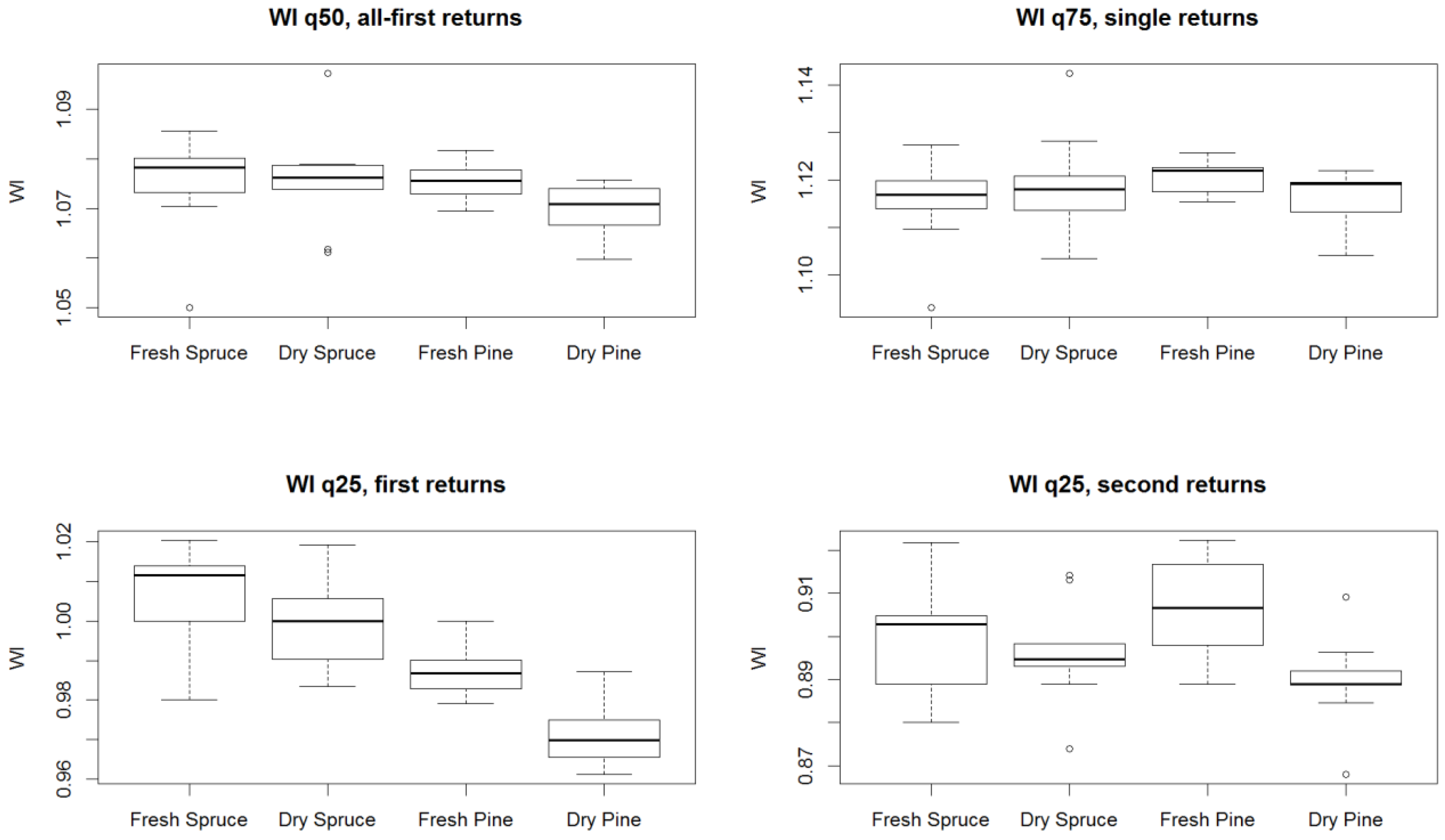 The choice of optimal wavelengths for multispectral Lidar in forest health monitoring needs to be studied. Based on our results, the drought treatment affected spectral reflectance, but the direction of change was opposite for the two species. Reflectance increased significantly in the visible wavelengths for the pines, while the spruces showed less variation in this spectrum. However, the NDVI calculated from the point clouds showed a statistically significant decrease after the drought treatment for both species, indicating that the index is not sensitive to the direction of change in reflectance. This is a promising result as NDVI can be calculated using a dual-wavelength Lidar system, which are already commercially available. The wavelengths of the hyperspectral Lidar instrument were limited to 1000.4 nm; thus, the effect of drought at longer wavelengths in the NIR region will remain a future topic. The availability of wavelengths in commercial Lidar systems is limited, emphasizing the demand of such studies.
The drought treatment resulted in significant changes in reflectance of the trees, particularly in the NIR region. First and single returns detected greater difference in NDVI after the treatment than second returns, indicating that a sensor capable of detecting one return per pulse is sufficient for calculating NDVI. The WI showed statistically significant differences only for pine, and the differences were mainly found using the quantiles of the WI distribution indicating that NDVI performed better in detecting drought of the these two indices. Hyperspectral Lidar showed potential in drought detection of vegetation, but more detailed investigations are needed for quantifying the sensitivity of the instrument for the detection of drought at different scales from leaf to stand level.

This work was made possible by the Finnish Society of Forest Science under grant (number 201510040). The Academy of Finland is also acknowledged for its financial support in the form of Centre of Excellence in Laser Scanning Research (CoE-LaSR) (project number 273806).