A Spectral Unmixing Model for the Integration of Multi-Sensor Imagery: A Tool to Generate Consistent Time Series Data
Previous Article in Journal

Environmental heterogeneity in space and time plays a key role in influencing trait variability in animals, and can be particularly relevant to animal phenology. Until recently, the use of remotely sensed imagery in understanding animal variation was limited to analyses at the population level, largely because of a lack of high-resolution data that would allow inference at the individual level. We evaluated the potential of SPOT 4 (Take 5) satellite imagery data (with observations every fifth day at 20 m resolution and equivalent to acquisition parameters of Sentinel-2) in animal ecology research. We focused on blue tit Cyanistes caeruleus reproduction in a study site containing 227 nestboxes scattered in a Mediterranean forest dominated by deciduous downy oaks Quercus pubescens with a secondary cover of evergreen holm oaks Quercus ilex. We observed high congruence between ground data collected in a 50 m radius around each nestbox and NDVI values averaged across a 5 by 5 pixel grid centered around each nestbox of the study site. The number of deciduous and evergreen oaks around nestboxes explained up to 66% of variance in nestbox-centered, SPOT-derived NDVI values. We also found highly equivalent patterns of spatial autocorrelation for both ground- and satellite-derived indexes of environmental heterogeneity. For deciduous and evergreen oaks, the derived NDVI signal was highly distinctive in winter and early spring. June NDVI values for deciduous and evergreen oaks were higher by 58% and 8% relative to February values, respectively. The number of evergreen oaks was positively associated with later timing of breeding in blue tits. SPOT-derived, Sentinel-2 like imagery thus provided highly reliable, ground-validated information on habitat heterogeneity of direct relevance to a long-term field study of a free-living passerine bird. Given that the logistical demands of gathering ground data often limit our understanding of variation in animal reproductive traits across time and space, there appears to be great promise in applying fine-resolution satellite data in evolutionary ecology research. View Full-Text
Keywords: SPOT; Sentinel-2; Quercus pubescens; Quercus ilex; oaks; blue tit; Cyanistes caeruleus; environmental heterogeneity; animal ecology; remote sensing SPOT; Sentinel-2; Quercus pubescens; Quercus ilex; oaks; blue tit; Cyanistes caeruleus; environmental heterogeneity; animal ecology; remote sensing
►▼ Show Figures 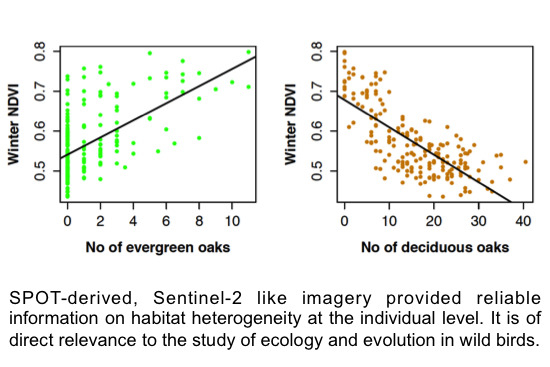