Landsat can be used to map tropical forest cover at 15–60 m resolution, which is helpful for detecting small but important perturbations in increasingly fragmented forests. However, among the remaining Landsat satellites, Landsat-5 no longer has global coverage and, since 2003, a mechanical fault in the Scan-Line Corrector (SLC-Off) of the Landsat-7 satellite resulted in a 22–25% data loss in each image. Such issues challenge the use of Landsat for wall-to-wall mapping of tropical forests, and encourage the use of alternative, spatially coarser imagery such as MODIS. Here, we describe and test an alternative method of post-classification compositing of Landsat images for mapping over 20.5 million hectares of peat swamp forest in the biodiversity hotspot of Sundaland. In order to reduce missing data to levels comparable to those prior to the SLC-Off error, we found that, for a combination of Landsat-5 images and SLC-off Landsat-7 images used to create a 2005 composite, 86% of the 58 scenes required one or two images, while 14% required three or more images. For a 2010 composite made using only SLC-Off Landsat-7 images, 64% of the scenes required one or two images and 36% required four or more images. Missing-data levels due to cloud cover and shadows in the pre SLC-Off composites (7.8% and 10.3% for 1990 and 2000 enhanced GeoCover mosaics) are comparable to the post SLC-Off composites (8.2% and 8.3% in the 2005 and 2010 composites). The area-weighted producer’s accuracy for our 2000, 2005 and 2010 composites were 77%, 85% and 86% respectively. Overall, these results show that missing-data levels, classification accuracy, and geographic coverage of Landsat composites are comparable across a 20-year period despite the SLC-Off error since 2003. Correspondingly, Landsat still provides an appreciable utility for monitoring tropical forests, particularly in Sundaland’s rapidly disappearing peat swamp forests. View Full-Text
Keywords: satellite imagery; Landsat; SLC-Off; South East Asia satellite imagery; Landsat; SLC-Off; South East Asia
►▼ Show Figures 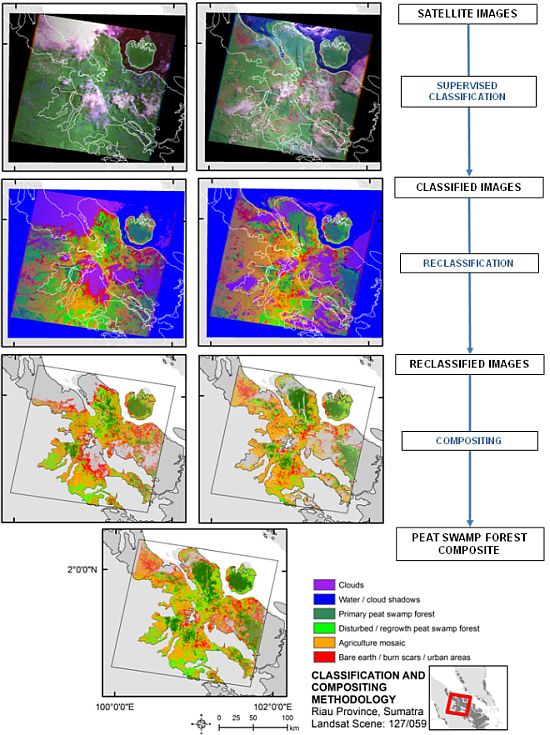