Several methods have been developed to provide polar maps of sea ice thickness (SIT) from L-band brightness temperature (T) and altimetry data. Current process-based inversion methods to yield SIT fail to address the complex surface characteristics because sea ice is subject to strong seasonal dynamics and ice-physical properties are often non-linearly related. Neural networks can be trained to find hidden links among large datasets and often perform better on convoluted problems for which traditional approaches miss out important relationships between the observations. The FSSCat mission launched on 3 September 2020, carries the Flexible Microwave Payload-2 (FMPL-2), which contains the first Reflected Global Navigation Satellite System (GNSS-R) and L-band radiometer on board a CubeSat—designed to provide T data on global coverage for soil moisture retrieval, and sea ice applications. This work investigates a predictive regression neural network approach with the goal to infer SIT using FMPL-2 T and ancillary data (sea ice concentration, surface temperature, and sea ice freeboard). Two models—covering thin ice up to 0.6 m and full-range thickness—were separately trained on Arctic data in a two-month period from mid-October to the beginning of December 2020, while using ground truth data derived from the Soil Moisture and Ocean Salinity (SMOS) and Cryosat-2 missions. The thin ice and the full-range models resulted in a mean absolute error of 6.5 cm and 23 cm, respectively. Both of the models allowed for one to produce weekly composites of Arctic maps, and monthly composites of Antarctic SIT were predicted based on the Arctic full-range model. This work presents the first results of the FSSCat mission over the polar regions. It reveals the benefits of neural networks for sea ice retrievals and demonstrates that moderate-cost CubeSat missions can provide valuable data for applications in Earth observation. View Full-Text
Keywords: predictive regression neural networks; sea ice thickness; microwave radiometry; CubeSats predictive regression neural networks; sea ice thickness; microwave radiometry; CubeSats
►▼ Show Figures 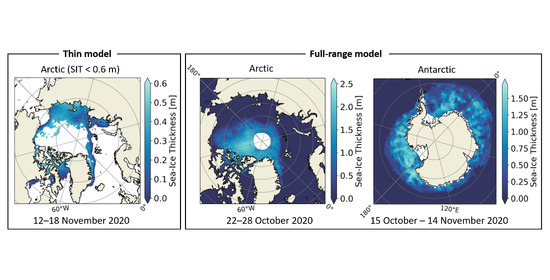