Air-Sea Interactions over Eddies in the Brazil-Malvinas Confluence

The Brazil–Malvinas Confluence (BMC) is one of the most dynamical regions of the global ocean. Its variability is dominated by the mesoscale, mainly expressed by the presence of meanders and eddies, which are understood to be local regulators of air-sea interaction processes. The objective of this work is to study the local modulation of air-sea interaction variables by the presence of either a warm (ED1) and a cold core (ED2) eddy, present in the BMC, during September to November 2013. The translation and lifespans of both eddies were determined using satellite-derived sea level anomaly (SLA) data. Time series of satellite-derived surface wind data, as well as these and other meteorological variables, retrieved from ERA5 reanalysis at the eddies’ successive positions in time, allowed us to investigate the temporal modulation of the lower atmosphere by the eddies’ presence along their translation and lifespan. The reanalysis data indicate a mean increase of 78% in sensible and 55% in latent heat fluxes along the warm eddy trajectory in comparison to the surrounding ocean of the study region. Over the cold core eddy, on the other hand, we noticed a mean reduction of 49% and 25% in sensible and latent heat fluxes, respectively, compared to the adjacent ocean. Additionally, a field campaign observed both eddies and the lower atmosphere from ship-borne observations before, during and after crossing both eddies in the study region during October 2013. The presence of the eddies was imprinted on several surface meteorological variables depending on the sea surface temperature (SST) in the eddy cores. In situ oceanographic and meteorological data, together with high frequency micrometeorological data, were also used here to demonstrate that the local, rather than the large scale forcing of the eddies on the atmosphere above, is, as expected, the principal driver of air-sea interaction when transient atmospheric systems are stable (not actively varying) in the study region. We also make use of the in situ data to show the differences (biases) between bulk heat flux estimates (used on atmospheric reanalysis products) and eddy covariance measurements (taken as “sea truth”) of both sensible and latent heat fluxes. The findings demonstrate the importance of short-term changes (minutes to hours) in both the atmosphere and the ocean in contributing to these biases. We conclude by emphasizing the importance of the mesoscale oceanographic structures in the BMC on impacting local air-sea heat fluxes and the marine atmospheric boundary layer stability, especially under large scale, high-pressure atmospheric conditions. View Full-Text
Keywords: Brazil-Malvinas Confluence; mesoscale eddies; air-sea interaction; marine atmospheric boundary layer; heat fluxes Brazil-Malvinas Confluence; mesoscale eddies; air-sea interaction; marine atmospheric boundary layer; heat fluxes
►▼ Show Figures 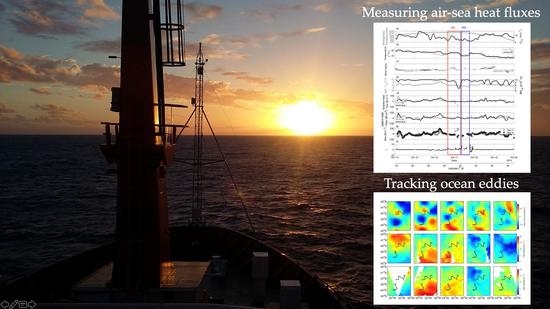