Convolutional neural networks (CNNs) are known for their ability to learn shape and texture descriptors useful for object detection, pattern recognition, and classification problems. Deeper layer filters of CNN generally learn global image information vital for whole-scene or object discrimination. In landscape pattern comparison, however, dense localized information encoded in shallow layers can contain discriminative information for characterizing changes across image local regions but are often lost in the deeper and non-spatial fully connected layers. Such localized features hold potential for identifying, as well as characterizing, process–pattern change across space and time. In this paper, we propose a simple yet effective texture-based CNN (Tex-CNN) via a feature concatenation framework which results in capturing and learning texture descriptors. The traditional CNN architecture was adopted as a baseline for assessing the performance of Tex-CNN. We utilized 75% and 25% of the image data for model training and validation, respectively. To test the models’ generalization, we used a separate set of imagery from the Aerial Imagery Dataset (AID) and Sentinel-2 for model development and independent validation. The classical CNN and the Tex-CNN classification accuracies in the AID were 91.67% and 96.33%, respectively. Tex-CNN accuracy was either on par with or outcompeted state-of-the-art methods. Independent validation on Sentinel-2 data had good performance for most scene types but had difficulty discriminating farm scenes, likely due to geometric generalization of discriminative features at the coarser scale. In both datasets, the Tex-CNN outperformed the classical CNN architecture. Using the Tex-CNN, gradient-based spatial attention maps (feature maps) which contain discriminative pattern information are extracted and subsequently employed for mapping landscape similarity. To enhance the discriminative capacity of the feature maps, we further perform spatial filtering, using PCA and select eigen maps with the top eigen values. We show that CNN feature maps provide descriptors capable of characterizing and quantifying landscape (dis)similarity. Using the feature maps histogram of oriented gradient vectors and computing their Earth Movers Distances, our method effectively identified similar landscape types with over 60% of target-reference scene comparisons showing smaller Earth Movers Distance (EMD) (e.g., 0.01), while different landscape types tended to show large EMD (e.g., 0.05) in the benchmark AID. We hope this proposal will inspire further research into the use of CNN layer feature maps in landscape similarity assessment, as well as in change detection. View Full-Text
Keywords: landscape similarity; feature maps; texture features; spatial patterns landscape similarity; feature maps; texture features; spatial patterns
►▼ Show Figures 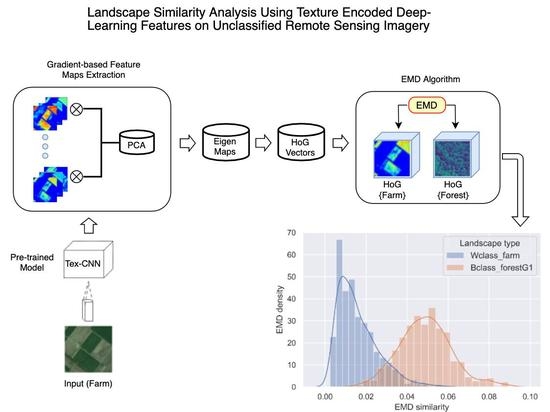