The scope of this work is to carry out a morphometric analysis of Pluto’s impact craters. A global Pluto digital elevation model (DEM) with a resolution of 300 m/px, created from stereoscopic pairs obtained by the New Horizons Mission, was used to extract the morphometric data of craters. Pluto’s surface was divided according to different morphometric characteristics in order to analyze possible differences in the impact dynamics and modification rate in each region. A Python code was developed, within the QGIS 3× software environment, to automate the process of crater outlining and collection of morphometric data: diameter (D), depth (d), depth variation, slope of the inner wall (Sw), diameter of the base (Db), and the width of the wall (Ww). Data have been successfully obtained for 237 impact craters on five distinct terrains over the west side of Sputnik Planitia on Pluto. With the collected data, it was possible to observe that craters near the equator (areas 3 and 4) are deeper than craters above 35°N (areas 1 and 2). Craters on the western regions (areas 2 and 3) contain the lowest depth values for a given diameter. The transition diameter from simple to complex crater morphology was found to change throughout the areas of study. Craters within areas 1 and 4 exhibit a transition diameter (Dt) of approximately 10 km, while Dt for craters within areas 3 and 5 the transitions occurs at 15 km approximately. The presence of volatile ices in the north and north-west regions may be the reason for the difference of morphometry between these two terrains of Pluto. Two hypotheses are presented to explain these differences: (1) The presence of volatile ices can affect the formation of craters by making the target surface weaker and more susceptible to major changes (e.g., mass waste and collapse of the walls) during the formation process until its final stage; (2) The high concentration of volatiles can affect the depth of the craters by atmospheric decantation, considering that these elements undergo seasonal decantation and sublimation cycles. View Full-Text
Keywords: New Horizons; Pluto; impact crater; morphometry New Horizons; Pluto; impact crater; morphometry
►▼ Show Figures 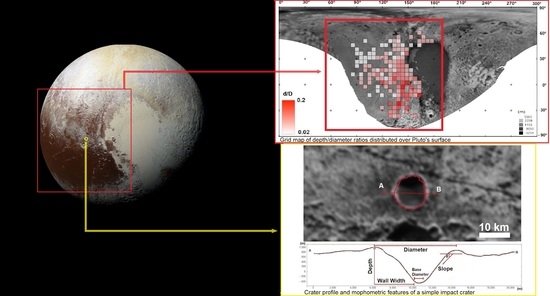