Validation of remote-sensing reflectance (Rrs) products is necessary for the quantitative application of ocean color satellite data. While validation of Rrs products has been performed in low to moderate turbidity waters, their performance in highly turbid water remains poorly known. Here, we used in situ Rrs data from Hangzhou Bay (HZB), one of the world’s most turbid estuaries, to evaluate agency-distributed Rrs products for multiple ocean color sensors, including the Geostationary Ocean Color Imager (GOCI), Chinese Ocean Color and Temperature Scanner aboard HaiYang-1C (COCTS/HY1C), Ocean and Land Color Instrument aboard Sentinel-3A and Sentinel-3B, respectively (OLCI/S3A and OLCI/S3B), Second-Generation Global Imager aboard Global Change Observation Mission-Climate (SGLI/GCOM-C), and Visible Infrared Imaging Radiometer Suite aboard the Suomi National Polar-orbiting Partnership satellite (VIIRS/SNPP). Results showed that GOCI and SGLI/GCOM-C had almost no effective Rrs products in the HZB. Among the others four sensors (COCTS/HY1C, OLCI/S3A, OLCI/S3B, and VIIRS/SNPP), VIIRS/SNPP obtained the largest correlation coefficient (R) with a value of 0.7, while OLCI/S3A obtained the best mean percentage differences (PD) with a value of −13.30%. The average absolute percentage difference (APD) values of the four remote sensors are close, all around 45%. In situ Rrs data from the AERONET-OC ARIAKE site were also used to evaluate the satellite-derived Rrs products in moderately turbid coastal water for comparison. Compared with the validation results at HZB, the performances of Rrs from GOCI, OLCI/S3A, OLCI/S3B, and VIIRS/SNPP were much better at the ARIAKE site with the smallest R (0.77) and largest APD (35.38%) for GOCI, and the worst PD for these four sensors was only −13.15%, indicating that the satellite-retrieved Rrs exhibited better performance. In contrast, Rrs from COCTS/HY1C and SGLI/GCOM-C at ARIAKE site was still significantly underestimated, and the R values of the two satellites were not greater than 0.7, and the APD values were greater than 50%. Therefore, the performance of satellite Rrs products degrades significantly in highly turbid waters and needs to be improved for further retrieval of ocean color components. View Full-Text
Keywords: ocean color product; validation; ultra-highly turbid water; GOCI; COCTS; OLCI; SGLI; VIIRS; AERONET-OC ocean color product; validation; ultra-highly turbid water; GOCI; COCTS; OLCI; SGLI; VIIRS; AERONET-OC
►▼ Show Figures 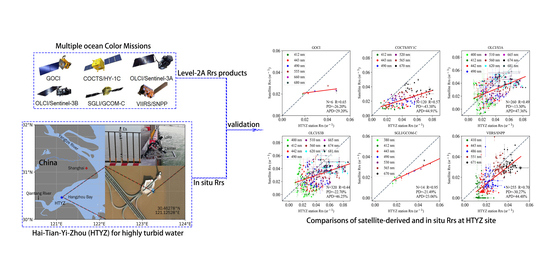