Armillaria genus represents one of the most common causes of chronic root rot disease in woody plants. Prompt recognition of diseased plants is crucial to control the pathogen. However, the current disease detection methods are limited at a field scale. Therefore, an alternative approach is needed. In this study, we investigated the potential of hyperspectral techniques to identify fungi-infected vs. healthy plants of Vitis vinifera. We used the hyperspectral imaging sensor Specim-IQ to acquire leaves’ reflectance data of the Teroldego Rotaliano grapevine cultivar. We analyzed three different groups of plants: healthy, asymptomatic, and diseased. Highly significant differences were found in the near-infrared (NIR) spectral region with a decreasing pattern from healthy to diseased plants attributable to the leaf mesophyll changes. Asymptomatic plants emerged from the other groups due to a lower reflectance in the red edge spectrum (around 705 nm), ascribable to an accumulation of secondary metabolites involved in plant defense strategies. Further significant differences were observed in the wavelengths close to 550 nm in diseased vs. asymptomatic plants. We evaluated several machine learning paradigms to differentiate the plant groups. The Naïve Bayes (NB) algorithm, combined with the most discriminant variables among vegetation indices and spectral narrow bands, provided the best results with an overall accuracy of 90% and 75% in healthy vs. diseased and healthy vs. asymptomatic plants, respectively. To our knowledge, this study represents the first report on the possibility of using hyperspectral data for root rot disease diagnosis in woody plants. Although further validation studies are required, it appears that the spectral reflectance technique, possibly implemented on unmanned aerial vehicles (UAVs), could be a promising tool for a cost-effective, non-invasive method of Armillaria disease diagnosis and mapping in-field, contributing to a significant step forward in precision viticulture. View Full-Text
Keywords: agriculture 4.0; chlorophyll; early diagnosis; fungal tree pathogens; mycology; plant disease; plant pathology; smart viticulture; vegetation indices; wine grapes agriculture 4.0; chlorophyll; early diagnosis; fungal tree pathogens; mycology; plant disease; plant pathology; smart viticulture; vegetation indices; wine grapes
►▼ Show Figures 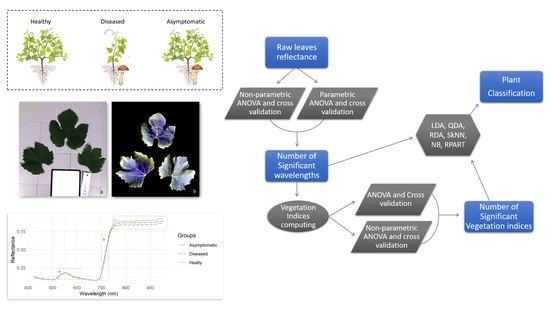