The integration of three-dimensional (3D) data defined in different coordinate systems requires the use of well-known registration procedures, which aim to align multiple models relative to a common reference frame. Depending on the achieved accuracy of the estimated transformation parameters, the existing registration procedures are classified as either coarse or fine registration. Coarse registration is typically used to establish a rough alignment between the involved point clouds. Fine registration starts from coarsely aligned point clouds to achieve more precise alignment of the involved datasets. In practice, the acquired/derived point clouds from laser scanning and image-based dense matching techniques usually include an excessive number of points. Fine registration of huge datasets is time-consuming and sometimes difficult to accomplish in a reasonable timeframe. To address this challenge, this paper introduces two down-sampling approaches, which aim to improve the efficiency and accuracy of the iterative closest patch (ICPatch)-based fine registration. The first approach is based on a planar-based adaptive down-sampling strategy to remove redundant points in areas with high point density while keeping the points in lower density regions. The second approach starts with the derivation of the surface normals for the constituents of a given point cloud using their local neighborhoods, which are then represented on a Gaussian sphere. Down-sampling is ultimately achieved by removing the points from the detected peaks in the Gaussian sphere. Experiments were conducted using both simulated and real datasets to verify the feasibility of the proposed down-sampling approaches for providing reliable transformation parameters. Derived experimental results have demonstrated that for most of the registration cases, in which the points are obtained from various mapping platforms (e.g., mobile/static laser scanner or aerial photogrammetry), the first proposed down-sampling approach (i.e., adaptive down-sampling approach) was capable of exceeding the performance of the traditional approaches, which utilize either the original or randomly down-sampled points, in terms of providing smaller Root Mean Square Errors (RMSE) values and a faster convergence rate. However, for some challenging cases, in which the acquired point cloud only has limited geometric constraints, the Gaussian sphere-based approach was capable of providing superior performance as it preserves some critical points for the accurate estimation of the transformation parameters relating the involved point clouds. View Full-Text
Keywords: point cloud; registration; down-sampling; iterative closest patch (ICPatch); unmanned aerial vehicle (UAV); terrestrial laser scanning (TLS); mobile mapping system (MMS) point cloud; registration; down-sampling; iterative closest patch (ICPatch); unmanned aerial vehicle (UAV); terrestrial laser scanning (TLS); mobile mapping system (MMS)
►▼ Show Figures 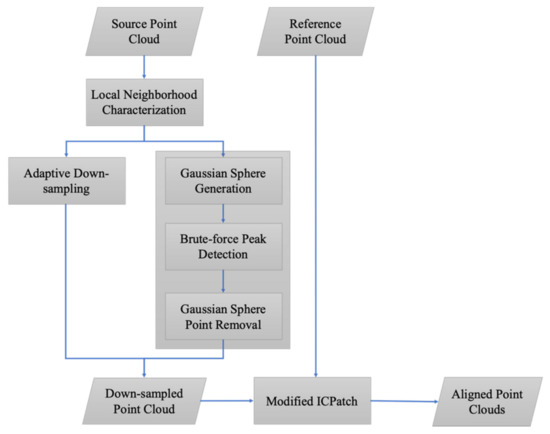