Change detection (CD), one of the primary applications of multi-temporal satellite images, is the process of identifying changes in the Earth’s surface occurring over a period of time using images of the same geographic area on different dates. CD is divided into pixel-based change detection (PBCD) and object-based change detection (OBCD). Although PBCD is more popular due to its simple algorithms and relatively easy quantitative analysis, applying this method in very high resolution (VHR) images often results in misdetection or noise. Because of this, researchers have focused on extending the PBCD results to the OBCD map in VHR images. In this paper, we present a proposed weighted Dempster-Shafer theory (wDST) fusion method to generate the OBCD by combining multiple PBCD results. The proposed wDST approach automatically calculates and assigns a certainty weight for each object of the PBCD result while considering the stability of the object. Moreover, the proposed wDST method can minimize the tendency of the number of changed objects to decrease or increase based on the ratio of changed pixels to the total pixels in the image when the PBCD result is extended to the OBCD result. First, we performed co-registration between the VHR multitemporal images to minimize the geometric dissimilarity. Then, we conducted the image segmentation of the co-registered pair of multitemporal VHR imagery. Three change intensity images were generated using change vector analysis (CVA), iteratively reweighted-multivariate alteration detection (IRMAD), and principal component analysis (PCA). These three intensity images were exploited to generate different binary PBCD maps, after which the maps were fused with the segmented image using the wDST to generate the OBCD map. Finally, the accuracy of the proposed CD technique was assessed by using a manually digitized map. Two VHR multitemporal datasets were used to test the proposed approach. Experimental results confirmed the superiority of the proposed method by comparing the existing PBCD methods and the OBCD method using the majority voting technique. View Full-Text
Keywords: weighted Dempster-Shafer Theory (wDST); very high resolution (VHR); Pixel-Based Change Detection (PBCD); object-based change detection (OBCD) weighted Dempster-Shafer Theory (wDST); very high resolution (VHR); Pixel-Based Change Detection (PBCD); object-based change detection (OBCD)
►▼ Show Figures 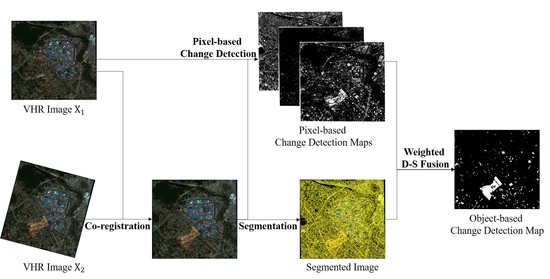